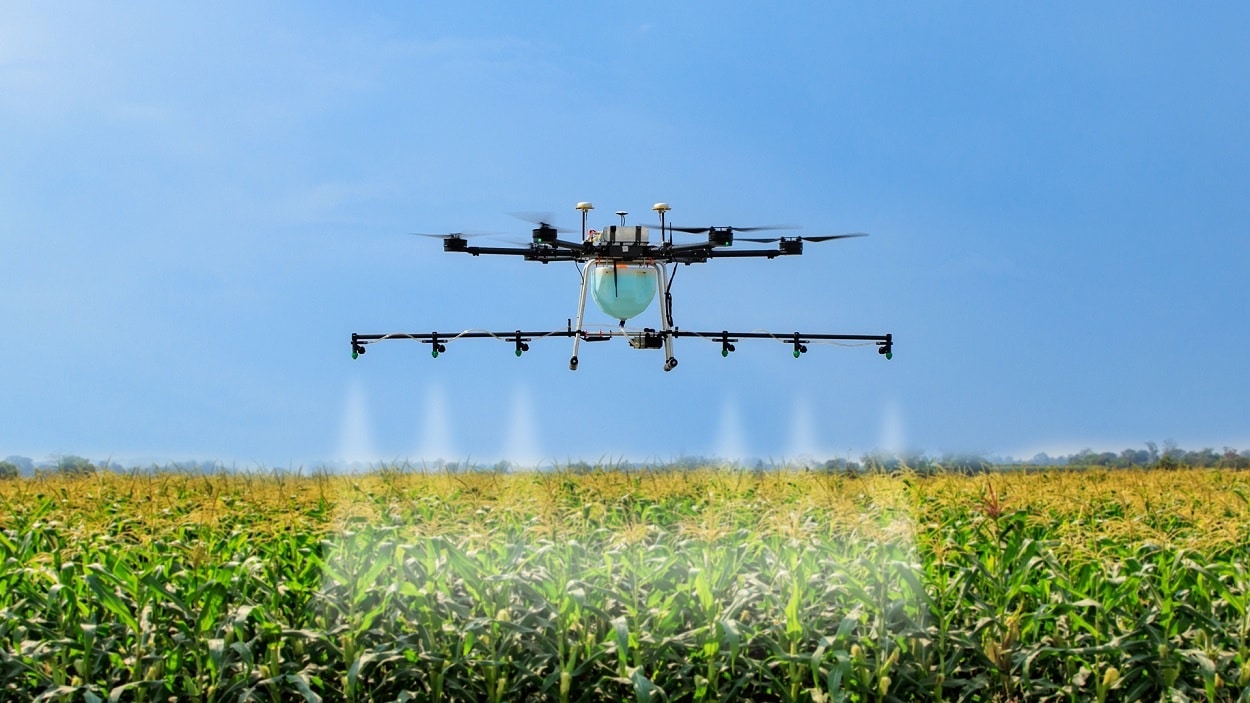 We interview one of the smartest guys in Singapore, DXC Labs Asia Director Akshay Saigal who delves into one of their latest agri-tech projects aimed at improving crop yields; a timely collaboration that may go a long way in helping to alleviate global food security concerns.

For those who don’t know, DXC Technology Digital Innovation Lab based in Singapore (DIL) is an advanced environment for technologists in Asia to converge, collab and co-create some of the most advanced emerging tech around.

DIL is funded by the Singapore Economic Development Board as an advanced environment for the incubation of creativity in tech.

Established nearly 18 months ago, DIL has sunk its creative chops into a few interesting projects, including –

BCI controls devices with your brain. BCI allows users to control devices using brainwaves powered by an EEG headset. It utilizes Mental Action and Emotion Monitoring modules that maps actions to brain activity and interprets a user’s brainwaves that measures emotions such as stress and excitement, which allows tracking for mood and immersive training experiences.

Video Analytics for Smart Estates management and security. The DIL team developed this for a JTC Corporation. It is designed to keep a regular overwatch of its facilities with minimum staff. A drone or vehicle based solution that uses ML improves visual analytics and enables insights to be drawn from flight data collection.

In-patient Antimicrobial Prescription Validation. According to DIL, inappropriate prescription of antimicrobials is a major problem globally, with 30% of prescriptions wrong or suboptimal in Singapore.

This solution uses AI and ML to evaluate drug, dosage, method and duration of treatment to a patient by analysing their medical history for a real-time, more accurate prescription.

With food security being top of mind given the current COVID-19 crisis and grave projections of world-wide food shortages predicted by the United Nations Food and Agriculture Organization (FAO) over the past decade, we were particularly interested in DXC’s image analytics with low earth orbit satellites.

This solution integrates IoT with geospatial data to deliver a holistic overview of the current situation of any crop.

The solution aims to eliminate the challenges faced by the agriculture industry, which include inaccurate prediction of yield and pest removal.

The integration of IoT and geospatial data enables weather, water level and fertiliser requirements to be tracked. Data analytics allow for an optimised timely release of water and pesticide, which enables better planning for agriculture across the supply chain.

We asked DXC Labs Asia Director Akshay Saigal to unpack some of the goals for the prototype in terms of increasing crop yield and material wastage such as fertilizers and water.

According to Saigal, in agri-tech, there are myriad factors that influence crop yield and the overall productivity of a farm.

He says industry KPIs can be summarized into three key areas:

Yield of stock – efficiency by using available assets e.g., the number of palm trees grown in an acre of land, or the number of watermelons per vine.

Lots of factors can affect yield, including the rearing processes, the weather and disease.

The average feed and water consumption are costly farm inputs that are critical for healthy crop production.

According to Saigal, the more we can minimize these without an unhealthy impact to yield and the environment, the better it is for farms to achieve profitability; and,

According to Saigal, the ministry of agriculture in every country provides access to historical data on soil-site suitability criteria that categorizes different land zones based on soil types against their suitability for cultivation of specific crop varieties.

These publications compile information of soil types with regards to their chemical composition, acidity, moisture levels, as well as other climate and topology data such as land gradient, expected rainfall and other seasonal data that could be extracted for data modelling.

In precision farming, Saigal says geostationary satellites provide continuous streams of high-resolution images which can be used effectively in estimating crop yields by looking at the acreage, crop health and soil quality.

“Because of their mobility and from their high vantage, drones are able to explore terrain or foliage which maybe challenging to other land-based vehicles. When equipped with the right sensors, drones can also help to track sunlight availability and intensity, wind speed, land slope, cloud cover and even precipitation. All these factors have an impact on soil quality and moisture, directly influencing plant transpiration rates, which as a result impacts crop yield,” says Saigal.

However, Saigal argues that the challenge with using drones is that they cannot tell what is happening underneath the crop canopy or at the organic layer above the topsoil.

“This is where unmanned ground vehicles or robot vehicles like the TerraSentia come in. They are smaller, more nimble than modern tractors or other heavy plant machinery and can self-navigate across large distances of arable farmland to capture images at the sub-canopy level,” says Saigal.

According to Saigal, DXC is exploring the most cost-effective ways to ingest real-time data sources from IoT devices, together with geospatial imagery, into a data lake.

“By closing the loop from real-time ‘live’ sources against historical data, we can create a more fine-tuned AI machine learning model which will help us to do trend predictions and forecasting more accurately in the future,” says Saigal.

We asked Saigal to share some of the challenges they had in merging the disparate data sets from the low orbit satellite data with the IoT sensor data.

“High-resolution telemetry data from low orbit satellites is very dependent on weather conditions. Data picked up by IoT sensors for UAV during this time may be indicating high soil acidity as a result of smog pollution, but it might not correlate well with the UGV scanning on the ground as the latter is shielded by the canopy.

Also, IoTs are usually tracking sensor data along a certain flight path or a specific route along the farmland. In order to ensure that there is complete correlation with geospatial data, each data point provided by the IoT needs to be paired against a GPS coordinates. As such, the location of the IoT may be reflected inaccurately if its GPS tracker is not functioning well. Therefore, careful preprogramming of the flight path needs to be ensured in order to maintain correct data collection.

Then there is the issue of labelling, which is a manual and labor-intensive stage of data preparation. Unfortunately, the importance of this activity is often understated and as such, resources are seldom equipped to be able to do this properly at the start of the project. The work is often relegated to staff who may not be SMEs and this often results in incorrectly identifying image data,” says Saigal.

We asked Saigal to discuss whether there were any unusual causal or correlations found when mixing the data sets.

“The work is still in early development but, from earlier experiments and simulations, DXC observed that crop yields may not be directly correlated to labor / mechanized productivity. This could be either due to rising global temperatures or pests / diseases that were not captured by the IoT sensors in a short term of data captured. Further investigation is still needed to confirm some of our initial hypotheses,” says Saigal.

We asked Saigal to share the types of AI Models used in deriving insights and whether its tuning was difficult.

“Regardless of the type of plant, and where you grow it, it will always have a time-causality. Uprooting the plant requires modelling this production lifecycle as a time-series analysis. DXC rely on recurrent neural networks (RNN) as these are networks designed to model nodes connected along temporal sequences. There are also more specialized classes of RNNs called LSTM (long short-term memory) which we can use for training to understand the behavior of such crop growth over time.

The question of the level of difficulty is dependent on accuracy of the model versus time taken and the data available for analysis. If we keep project deadlines as a constant, yet we wish to turn the knob up for accuracy, it would mean requiring much more compute power, which translates to higher costs regardless of whether you are running it on-premise or over the cloud. Then, there is also the subject matter of which controls you want to examine or change for your data model. For instance, over time or about mid-way into the analysis, preliminary data may indicate that certain dimensions i.e. key features of the machine learning model are no longer as valuable because they are inconsistent or expensive to track. Dropping these features half-way may ruin the entire data collection process and lead to a very chaotic data soup, which makes it very difficult for data scientists to make any useful adjustments later,” says Saigal.

With the roll-out of 5G underway (albeit slowly), we asked Saigal on the impact of 5G on this project and, how much processing can be central versus on the edge?

“Generally, if a specific task requires a high volume of data or if it is very processor-intensive, the latency and cost required to transfer data to the centralized cloud would be very costly. One such scenario would be image recognition for obstacle avoidance as this needs to happen in real-time e.g. a sensor robot navigating itself through a corn field while collecting imagery of diseased/healthy crops. Under such circumstances, edge computing would be much more practical.

Key pull factors for cloud-computing would primarily constitute the apparent lower cost of storage and compute vs storage and processing on-the-edge. However, the pertinent question to ask then would be   – is there an immediate and urgent requirement for real-time decision making? How much value can we bring by analyzing this data now vs. answering it later?

IoT sensory data that is captured still has to be accumulated and correlated against geospatial imagery over a time period in order to train a more accurate machine model, which we can then use to infer or predict trends for decision making,” says Saigal.

With much of South East Asia still low agri-tech and agri-dependent, we asked Saigal how he envisages breaking down the barriers to adoption working?

According to Saigal, digital transformation of the agri-tech industry from labor-intensive to high-tech adoption is a complex process that requires a lot of active community involvement, education and continuous development.

“As food supplies become more expensive due to shortage of food production due to shifts in the global climate and other socio-economic conditions, there will be an increase in demand for more efficient and productive food production capabilities. Agri-tech is the game changer to improving crop yields and education can be bring this inflection point closer to us before it is too late. Already, we are seeing an influx of YouTube videos showcasing how easy it is to produce biodiesel from manure, and how Thai farmers are building contraptions to catch fish from the river. With the prevalence of 5G technology, we will clearly see more agri-tech evolving with the usage of mobile phone cameras to identify weeds and how all this data can be aggregated at a central source for analytics and decision-making,” says Saigal.