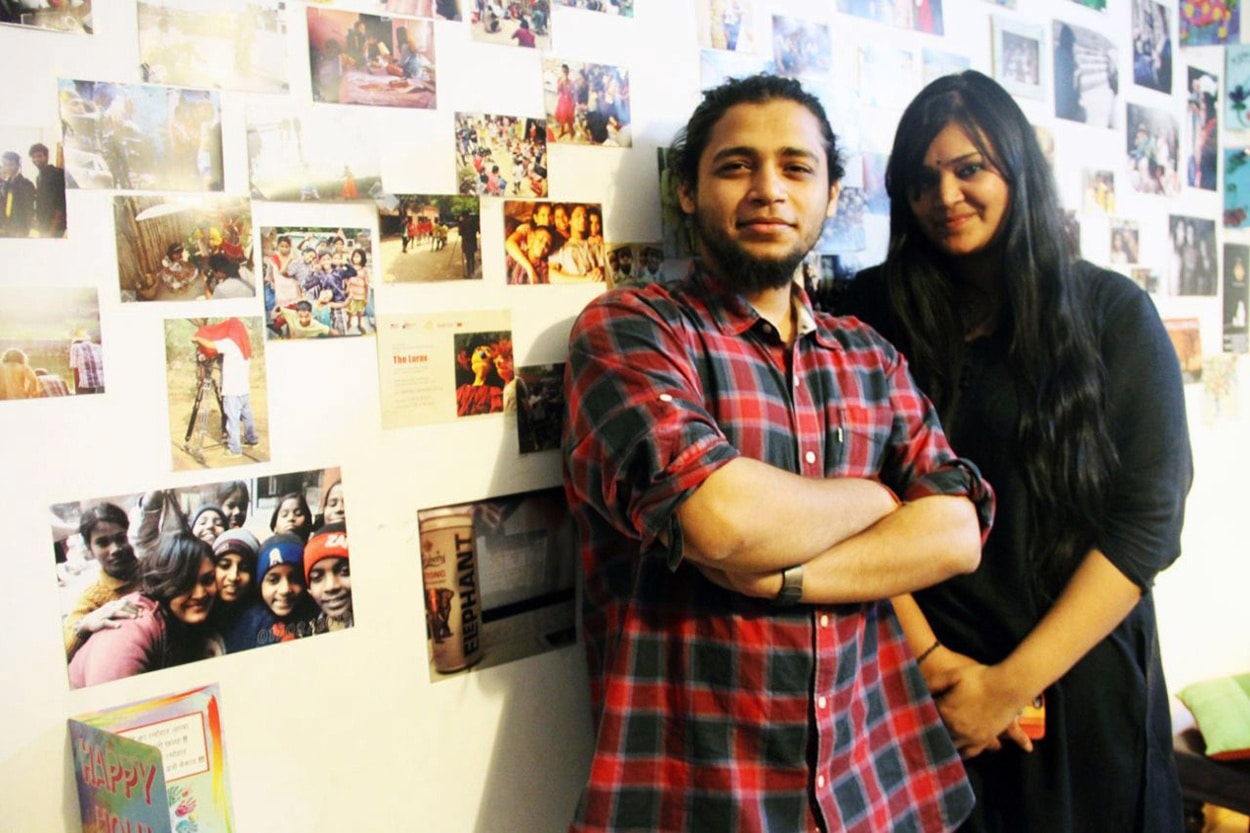 Co-founders Plaban Bagchi and Prerna Siddharth of Big Klick Films share their journey on sponsoring disadvantaged, and abused kids from Delhi India, into a career pathway in film production, and hopefully, lead them to possess a greater personal agency over their adult lives.

Big Klick Films is a media start-up founded in 2012 by two like-minded people who met at film school and were driven by a common passion of film making.

Unlike most private film schools where your ability to pay would decide admission, Big Klick Films wanted to be a school with a difference, by choosing underprivileged students from the slums in Delhi.

Plaban Bagchi and Prerna Siddharth founded Big Klick Media in a two BHK flat in South Delhi with a seed capital of AUD 6,953; personal savings they managed to accrue from their respective jobs.

After completing his masters in photography Bagchi worked abroad with BBC for six months, but returned to India to find work that could excite him. Moving between jobs, but still focusing on his core competency, Bagchi continued making films for non-governmental organisations and corporate clients.

Teaching was incidental to Bagchi. While he was making a film for an NGO, a handful of kids who were struck by watching the film-making process, both in front and behind the camera, approached him to learn the basics of film making and as they say, the rest is history.

Siddharth joined the social sector at the age of 16, making films and designing programs for her father’s educational non-profit endeavours. In her own small universe, Prerna was busy making films for India’s national network Doordarshan. She went into the interiors of India’s most impoverished states Jharkhand and Chattisgarh to make films on social awareness.

Big Klick Films happened over a cup of coffee, says Bagchi. They got together and partnered with other non-profit organisations in New Delhi to work in the city’s slum, empowering children through the medium of story-telling and filmmaking.

Through this journey, they met many children from humble communities, who displayed a potent knack for photography and film making. Having faced their own financial and personal struggles related to filmmaking, they could resonate with these children’s subdued talent and decided to give them an outlet. Thus, Big Klick took form. They decided to open a not-for-profit film school for talent and scouted from under-represented communities within Delhi.

The business model is based on funding generated from 50 percent of students who can afford to pay the fees so that the education of the other 50 percent of disadvantaged kids is sponsored. The institute charges a minimal amount of AUD 598 for a four-month course that covers basic photography, advanced photography and basic filmmaking. Big Klick Films has a batch of 25 students at any point in time.

“Fees that we collect from half of the students are used to run the institute. In any case the fee structure is designed at our breakeven point.  Both I and Prerna, also give 30 percent of the money that we earn from making films for NGO’s or private companies. Occasionally, there are donations from individuals who like what we do,” says Bagchi.

“We rent the equipment on week days to our own students at a very nominal rate…Contrast it with what I paid a decade back—AUD 3,584 for a one year course in film making. I am not saying that I was overcharged. I cannot give that infrastructure, those facilities, all that has a cost. I could afford it, Prerna could do it but Big Klick happened only to make film making more affordable and accessible. These kids from the slums don’t want air conditioned classes, fancy canteens, lounges or a sophisticated library. Give them the camera and see the magic they bring to what they do. They are supremely talented and most of them are now gainfully employed,” says Bagchi.

Scaling up is a slow process as the capital-intensive nature of the work has forced this philanthropic duo to postpone expansion of the institute. According to Bagchi, expansion is definitely on their minds, but they need to find the right investor who shares our vision.

“Reaching out to an angel investor or a financier has crossed our mind too but involving them would force us to become profit driven, which would defeat the very purpose of our endeavour of imparting free education,” says Bagchi.

Bagchi says another important aspect as to why scaling-up operations was not on the cards in near term; there are great expectations from the school to place all students into gainful employment once they graduate from the institute.

Most kids who join the school are helping hands to a lot of parents in the chores they do and to sustain a living.  Asking the parents to allow their children to come to the school for four hours on two consecutive days has taken a lot of persuasion and admonishment, over past four and half years.

“Parents of these kids take it as a loss in man-hours. It is a lot of struggle to get a job placement in film. The students lack basic soft-skills, which are the biggest impediments in their growth. We can teach them only so much…the rest is on them,” says Bagchi.

According to Bagchi the biggest take away for them is that the institute has made students express themselves both artistically and socially. The students have grown up from being shy and docile to confident and determined and unyielding at places where they have to be. However, the attitudes of parents have also seen a gradual shift for the better.

“There have been cases where girls have been sexually abused or were being coerced by family members to get married, despite being minors. Some have learned to resist. Prerna has given that confidence to these girls. A lot of people here, are terrified of her now,” says Bagchi.

For Bagchi teaching has been both his blessing and a continual struggle in every way; artistically, financially and in perseverance.

“What I do like is hiking. And that’s what filmmaking is. It’s a hike. It’s challenging and exhausting, and you don’t know what the terrain is going to be or necessarily even which direction you’re going in… but it sure is beautiful,” says Bagchi.