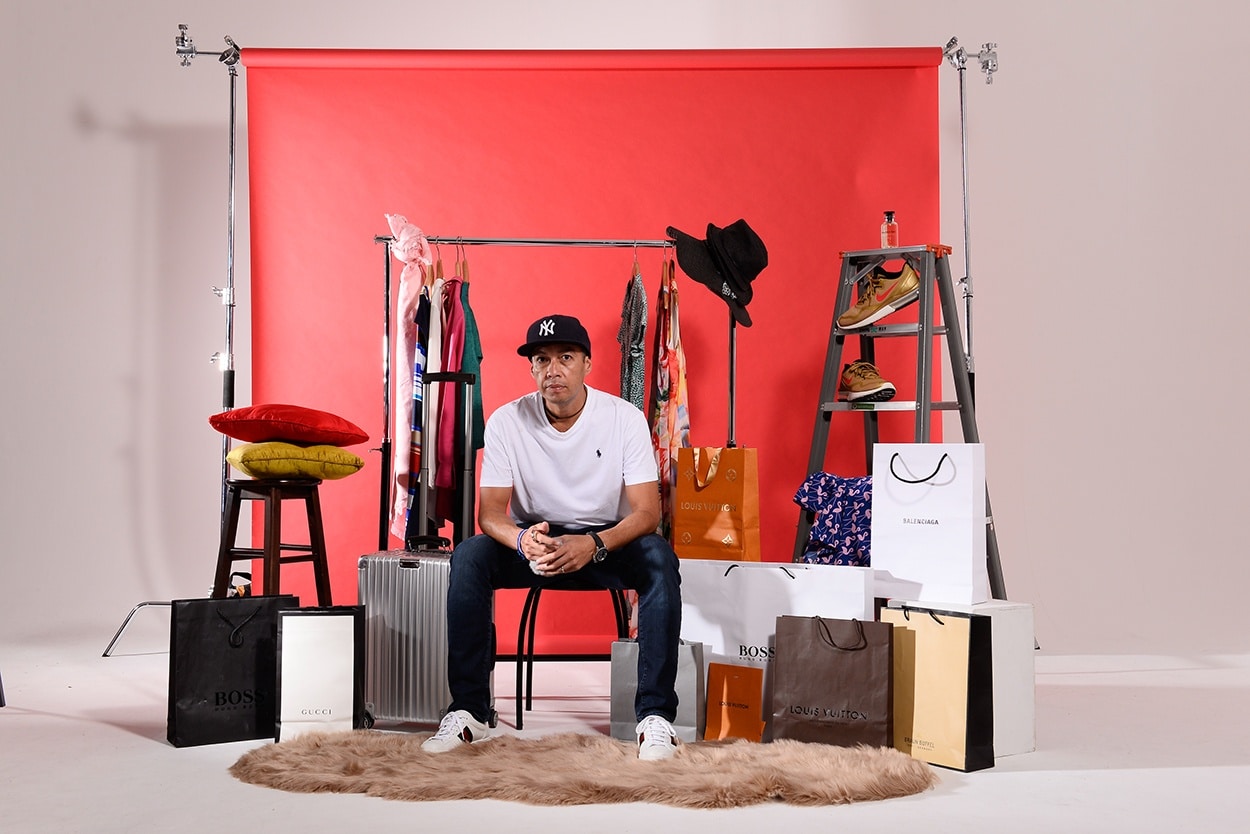 One of Asia’s most successful Entrepreneurs Bob Chua shares his latest offering with BlinQ – a superapp for mid-market luxury fashion that promises fashionistas a hyper-personalised user-experience and brick-n-mortar retailers a renewed channel to increase footfall in the age of on-line retail.

According to a recent McKinsey global fashion report, the personal luxury market is estimated to be USD300 billion and is forecast to grow to USD 500 billion by 2020; 44% is projected to come from Asia.

Fusing the successful models of ASOS, Farfetch, Rent-the-Runway and The Real Real into a single platform, Founder of BlinQ Bob Chua is on a mission to convert a market of 650 million Asian consumers to patronize a luxury fashion app that is designed to meet the expectations of a growing, affluent Southeast Asian market.

With a background in tech, analytics and e-commerce, Chua says BlinQ goes beyond an e-commerce platform, with its Augmented Reality (AR), rental marketplace and back-end logistics differentiation that is specifically targeted to SE Asian sensibilities.

A rental subscription model also provides users the option of renting apparel and promises its back-end automated warehousing operations means consumers no longer have to wait weeks for products to arrive in the Asia-Pacific region.

After building a successful 20-year career in analytics and market intelligence research (TNS, Nielsen, and Pulse Group PLC), Chua says his experience researching consumer behavior, testing products, measuring mega trends, seeing how people think and react to brands through leveraging technology has taught him that in business, success is usually down to good timing. We asked Chua why he thinks luxury fashion in Asia – which is trending towards creating bespoke, community-focused interaction with their brands – would work in an online environment now.

After sitting on the board of a company that gave him exposure to e-commerce and automation, Chua noted that everyone, young or old, loves luxury fashion.  His research into Southeast Asia, which is booming in terms of e-commerce, with a young population and a growing affluence (by 2030 Asia is projected to have the world’s biggest middle class), a huge social media and mobile adoption uptake, Chua says he understood he needed to find a niche given that there were already major e-commerce players in this region. After investigating US and European e-commerce players too, Chua’s first mission was to resolve the issue of SE Asian consumers buying from the US and Europe.

“There’s quite a big following of Asian consumers who purchase goods from USD 1,000 to USD 350,000 all the way from the US or from Europe and it takes weeks to get here. The shipping costs are high. If you want to return it, it’s a lengthy process. We set out to fix this by having a local fulfillment here. Items are mostly manufactured in our region, but the orders placed here means goods are doing a world tour before it gets back to you. It’s a waste of resources. When it came to returns, we studied the market and noticed that in peak seasons, like Christmas or Chinese New Year, returns spike up to about 60%. Goods are being stockpiled that aren’t reclaimed into the system which is a major industry issue. So, we wanted to help consumers find the right product the first time. This helps the brand, logistics companies, it reduces carbon footprint, wastage and a whole bunch of other issues. To minimize this problem, we introduced augmented reality onto our mobile app. Consumers can emulate how the product looks like on them and determine accurate sizing before they purchase the item. This approach increases purchase propensity and decreases returns by up to 60%. By giving this user experience, we won’t eradicate returns altogether, but we will significantly reduce it,” says Chua.

Another major issue, especially for more developed markets, are retailers in High Street and Malls are experiencing a decrease in footfall and an increase in rents. This has resulted in retailers significantly reducing their footprint or shutting down altogether.

After running a trial for the past few months, Chua says they noticed that a lot of online traffic, especially for more expensive items, consumers researched online first. Once they reach a point of purchase, there was a drop off for two or three days. Then the consumer returns online and completes the purchase. Chua’s hypothesis is that the user visited the store first to get that offline experience, but they come online to make the purchase because the app offers greater options of colors, sizes etc that they can’t get in-store.

“Large mall operators have approached us to help address this problem by using augmented reality in stores. We offer retailers a white label option of our app, which can be used in-store, and we ship out the order from our central fulfillment, so retailers no longer have to carry ten shades of a single product. Our AR tech, our marketplace as a platform that retailers can trade on, and our logistics component which streamlines order fulfillment means consumers will have access to all brands, everywhere, anytime, which will ultimately drive down the price point for everyone,” says Chua.

According to Chua, BlinQ reflects how consumers now like to consume fashion and points to the US and Europe as leading the way in terms of fashion curation and rental of fashion items via a subscription fee model. BlinQ is based on the model of US-based unicorn Stitch Fix, which became a billion-dollar company after three years. They used data to predict the next big trends, such as, when will skinny jeans go away?

“In the US there’s Rent the Runway, and one of the new unicorns Stitch Fix, and a whole bunch of companies that have innovated how people consume fashion. So BlinQ offers rental and curation services on our platform too. If we look at our wardrobe, we only use 15% of it, so we also offer consumers a space to sell pre loved items. We also offer a buy now, pay later service, so if a consumer wants to invest in a USD 1000 jacket, they can break it into USD250 installments over four months, but have the product straight away. We are really just giving consumers what they want and this approach to retail is a lifeline to brick and mortar retailers too,” says Chua.

As luxury fashion brands have focused on creating brand experience spaces and VIP events to build brand loyalty to counter the growing tide of online retail, Chua acknowledges that consumers want the touch and feel experience too, particularly if the purchase is a USD 30,000 bag, consumers expect the royal in-store treatment. His view is that BlinQ does not detract from brick-n-mortar retailers but ultimately benefits them.

“To enhance a VIP experience for consumers, we offer a concierge service whereby we bring the product to you if you choose to opt for it. We call it White Gloves. We bring multiple products in the range selected and you can try it on in your home or office and you can just keep what you want or take nothing…The fact is, retail hasn’t changed for a 100 years and fashion retailers realize that they need to innovate or die,” says Chua.

BlinQ recently raised USD 2 million from private investors as part of its seed round and is currently en-route to their next fundraising round in Q3 2019. After two successful Big Data exits and an IPO on the London Stock Exchange, Chua says having a previous track record made his latest venture into what he believes is a hugely untapped market, a little easier.

“Two million of seed, for this part of the world, is quite substantial. It’s never easy raising funds but I think being an entrepreneur with a track record, made it easier. The people that I approached have either been involved in logistics or e-commerce or fashion, so they understood the concept straight away. We want to be the challenger to Alibaba and Amazon in this region. Both Alibaba and Amazon, even with their financial muscle, can’t just throw money around in Southeast Asia. For example, in India and China, while they’re big markets, Southeast Asia is very nuanced. We have 14 different cultures within this region, with different regulations, different people, different laws, different taxation, different payment gateways, different languages, different business cultures, etc. Even for someone like me, who speaks several languages, it is challenging, let alone someone coming from abroad and trying to blanket sell to Southeast Asia,” says Chua.

According to Chua, being a capital-intensive business, getting a foothold in the region is crucial, therefore BlinQ is set on establishing a presence in Singapore, Indonesia, Taiwan, Thailand, Vietnam and the Philippines. While he says these are all very diverse and very big markets, he expects the geographic roll out to be within the next two to three years – therefore the ability to raise capital and scale quickly is paramount.

“If we look at the trends over the past few years, everyone’s tried to stay private as long as possible. Now we have come full circle and we’re seeing a lot of companies start to IPO again. There’s a queue to go public again. What’s different now is the availability of funding is much more prevalent. I mean, in Singapore, we have about 200 VCs alone. I think ecommerce is still very hot. If you look at the different sectors, funding rounds have grown exponentially. If we look at retail, online versus offline, Asia, in general, online retail is only about 5% right now. So, the upside is huge. If you just look at the numbers, we are only at the beginning of this; as long as we can access capital to grow and execute at scale fast enough. Purely from a competitive perspective, you have to strike while the iron is hot,” says Chua.

As for macro trends in the fashion industry, Chua says long-term planning is difficult given the current geopolitical issues around trade wars and Brexit and the pace of change in tech etc, all makes market visibility and predictability, far more obscure than in previous decades.

“As far as we can see, luxury consumption is slowing down in places like China. What it means for Southeast Asia, we don’t know, but for the next 12-18 months, we believe it’s going to be very bullish. So, speed of execution is critical. I think it’s harder to do three to five-year horizons for businesses given how quickly things change now. Truthfully, we can see only one month ahead. I mean, VCs look at 10-year horizons, because that’s how long their funding lasts. We can make decisions based on the data we have now, and what economists and analysts are saying in terms of geopolitical, economic mega trends is that Asia will continue to grow, so I can  confidently say yes, I think we’re in the right region, we know where we’re going, how we’re going to spend our proceeds of the funding, and where we’re going to invest it,” says Chua.

The BlinQ project is also a platform for Chua to achieve a personal goal – to give up and coming Asian designers a platform to showcase and compete on an international stage.

“We have great Asian designers who don’t have the brand legacy of the French or Italian fashion houses. To give local talent an equal opportunity for distribution alongside other established brands through our platform is thrilling for me. Especially because we are better placed to understand the sensibilities of consumers in Asia. So, for me being an entrepreneur, in Southeast Asia, I think BlinQ is also my way of paying it forward,” says Chua.

BlinQ beta version is currently available on Google Play and it is expected to officially launch its iOS and Android versions in May 2019.

previousProperty Market Review - Where to Buy in 2019