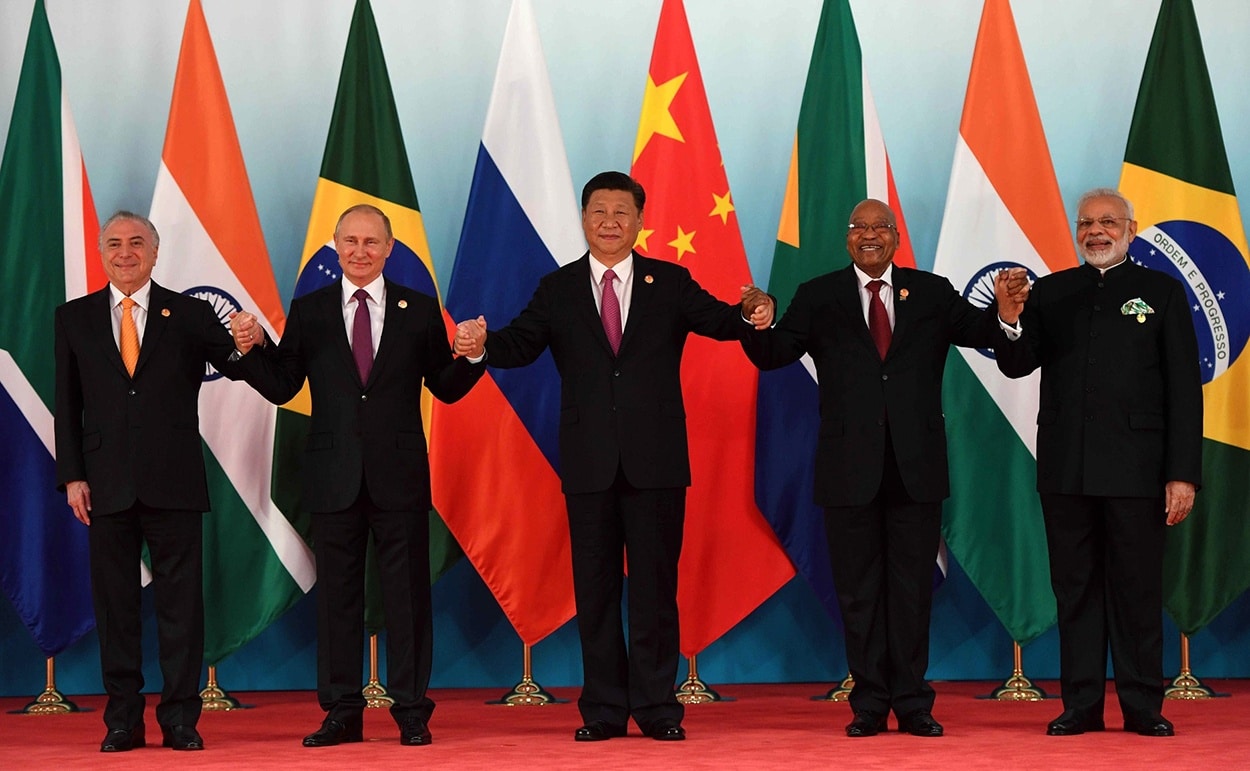 The Chinese leader pushed for enhanced free trade and investment and urged attendees to do away with following the protectionist tendencies of the West, particularly in view of the recent US-led trade war initiated by US President Donald Trump.

During the 3-day summit, President Xi says BRICS countries must make efforts to protect the multilateral trading system under the framework of the United Nations, the G20 and the World Trade Organization.

The summit’s main agenda for this year was to re-iterate that such protectionist tendencies cannot be imposed on a block (BRICS) which collectively accounts for 40 percent of the world’s population and almost a quarter of its trade output.

President Xi raised issues posed by the ongoing trade war with the US imposing high tariffs on Asian exports. His view is protectionist tendencies will weaken the already fragile global economic situation and halt momentum in world trade.

At the summit, China showcased its future roadmap and declared an agenda that appeared set for aggressive growth. Xi pledged that China is working towards a more investor-friendly environment that is aligned with international standards. This conviction may be seen in the way China recently opened its financial markets to foreign investors.

China is also moving full-steam ahead on its ambitious Belt and Road Initiative, a project which has invited serious reservations from India.

China sees the initiative as a means to assert itself in the Asian continent and to realise the UN 2030 Agenda to create new opportunities of social and economic development for participating countries.

In November 2018, China is hosting its first International Import Expo in Shanghai, which appears to have already sold out. The event will help the country to further its trade liberalization agenda and make its markets more open. Over 130 countries and more than 2,800 companies have already confirmed their participation according to a recent media report. Over 150,000 domestic and international buyers are expected to attend this fair.

China has a reputation for seizing initiatives – to further its own economic and strategic interests – well before its peers and capitalize on the first mover advantage. While the country is investing heavily in Africa, it showed tremendous alacrity in announcing recent investments worth USD 15 billion in South Africa’s cash strapped energy sector.

Many pundits dub it as a smart strategy employed by China to counter losses in case of a full-blown trade war with the US.

President Xi has publicly declared Africa to have more development potential than any other region currently in the world.

China’s support for emerging economies is part of its strategy to assert itself as a global super power. During the summit, President Xi highlighted China’s roadmap ahead, with a special focus on increasing human resources cooperation with emerging markets across the globe.

The dragon nation plans to invite experts from the five countries to draft a blueprint for working together in a new industrial revolution. The country is looking to enhance competitiveness in emerging markets and simultaneously a better coordination among the members of the BRICS block.

President Xi told BRICS attendees that they need to keep abreast of emerging trends and remain agile, or risk becoming irrelevant in changing times. He urged the importance of countries to seize opportunities, increase input in innovation, focus on creating new areas of growth and replace old growth drivers with new ones.

“BRICS nations need to advance structural reforms and remove barriers to innovation to unlock innovation potential and energize the market. That could happen only by adopting global best practices,” says President XI.

According to China, the growth of emerging markets is still being influenced by regional conflicts, unilateralism and protectionism. It was important for BRICS countries to continue to pursue innovation-driven development and strengthen coordination on macroeconomic policies to counter-lever increasing protectionism from the West.

China also cautioned against the impact of technology that is increasingly creating an automated world leading to technological unemployment. The country appealed for maintaining a balance between advanced and traditional methods in industries that have been mass job creators.

Against a backdrop of a global trade war unfolding, China’s pitch to the BRICS summit received a resounding response from other members. Participating countries unequivocally confirmed they want a fairer and more representative global order in diplomacy and trade.

Lately, both China and India have been at the receiving end of billion dollar-trade war with the US.

BRICS nations also called for reforms in the United Nations, the UN Security Council and the International Monetary Fund to enable a better representation of all developing economies. BRICS attendees also voiced their request to the World Trade Organisation and the US to honour their commitments towards a multilateral trading system which faces unprecedented challenges in the face of protectionist tendencies.

Interestingly, Asia’s media commentary post summit highlighted how China has successfully been able to build a coalition of emerging economies to defend multilateral trade. The event is being seen as unprecedented for BRICS as it has never been so vocal about the importance of liberalized trade.