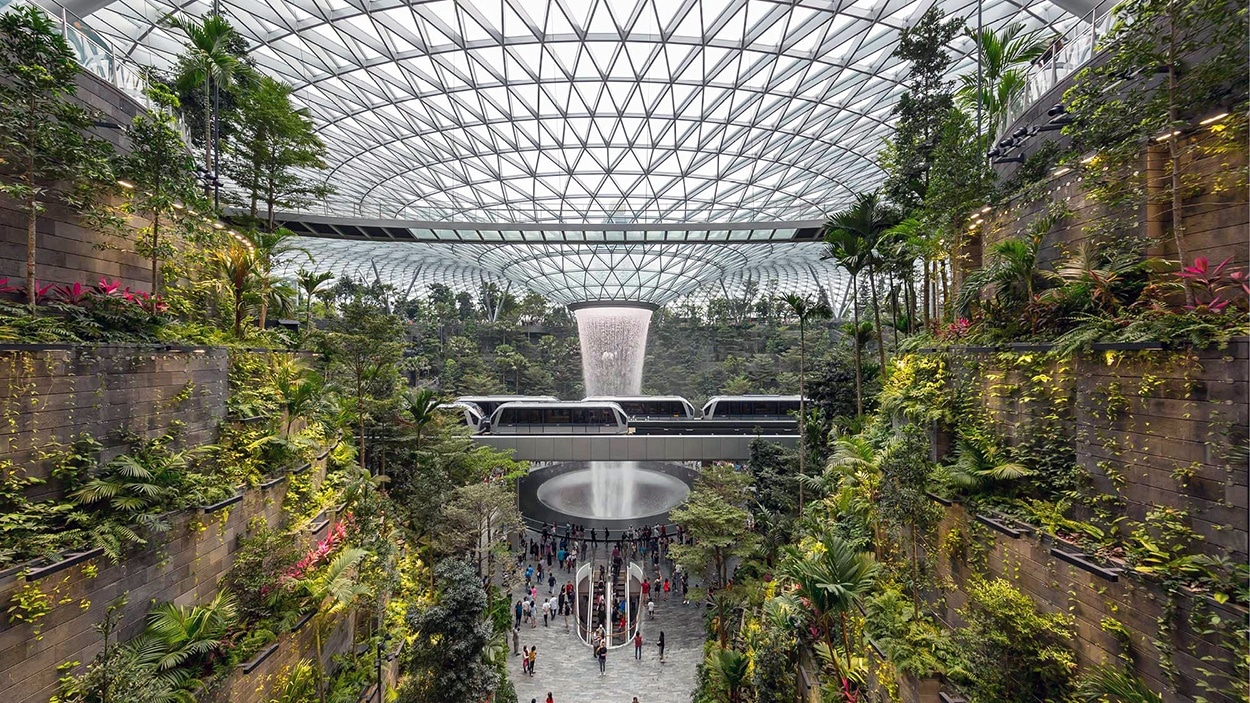 Liew Mun Leong (LML): We have experienced before, when SARS happened in 2003. So, we are always aware of emergency situations in the airport. The airport is a very public place and all sort of events can happen. So, we have already prepared a crisis management system for anything, whether it’s a volcano in Iceland or COVID-19. So, we have a system to cater for this: plan, resource and train.

CT: In this particular case, what were some of the immediate steps you took to deal with infected travelers and quarantine situations?

LML: Many people don’t know that the airport is a heavily trafficked base. Every day, an average of about 180,000 people pass through our four terminals.

Comparing the traffic volume and comparing the severity of contagions, it’s actually worse than a hospital because we have international travelers from all over the world, and they may be carriers of all sort of things. So, we know that we have to prepare for that situation, in terms of screening, preventive measures and anti-contagion measures.

CT: What health measures have you put in place to safeguard your staff working at the airport?

LML: Well, we already have temperature screening for both passengers and every user of the airport. Even our own staff, when you come in, we have already taken your temperature. We also segregate them. We also allow working from home. My manager is on the other side. I don’t see him except for the TV monitor. So, we take all sort of measures to prevent contact and mass gatherings. For big meetings, we cancel them.

CT: The outbreak of the coronavirus has impacted business in a big way in Singapore. Changi Airport Group itself has seen a sharp drop when it comes to travel and tourist arrivals. As Chairman of Changi Airport Group, how are you steering the Group during this very difficult time?

LML: Well, we have to accept that this is a contagion that we have to fight and prevent. We have to make sure that we can carry through, as in the case of SARS. In the case of a virus fight, we think that we will carry through it in a matter of months or we wait for a situation when a vaccine is developed.

We just have to brace ourselves for it. Spend your time gainfully. I always say, never waste a crisis. We go through training. Instead of flying, I spend my time seeing my staff batch by batch at Surbana Jurong. I just ran through one whole week of meetings. You’ll discover a lot of things.

CT: Like any crisis, people often worry about their jobs as companies try to manage costs. What are you telling your staff at Changi Airport? Are their jobs safe?

LML: It is exactly what I did at CapitaLand. At CapitaLand, as I said, there was no retrenchment. We cut costs to save jobs and we took voluntary cuts. From three
percent, up to my level, 20 percent so that we could conserve.

Actually, it’s not so much the money, it is morale boosting that jobs are assured, that they’re not being laid off in bad times. So, I think the psychological effect of assuring the staff is more important than the dollars and cents. How much do I save? $10 million? But the impact of a morale drop is much more serious. I take the point that you must keep the morale high in a crisis, just as in a battle.

CT: A lot of people are comparing this crisis to the SARS crisis back in 2003. How does this health crisis feel to you? Is the impact bigger? Will the recovery take longer?

LML: For SARS, at the beginning first few months, we felt more than a 50 percent drop. But as we recovered, the loss was about 15 percent. In this case, the first few months was 33 percent, at its worst it was 40 percent. But we forecast that at year end, we would probably be at 20 percent in terms of losses.

LML: It sounds worse to me, certainly. It mutates. It’s more transmissible.

CT: Whether it’s building real estate or airports, you’ve always seen opportunities in times of crisis. What are you eyeing right now in terms of business’ opportunities for Changi Airport Group?

LML: It’s slightly different from real estate. In real estate, there will be distressed companies, assets that you can bottom-fish. So, you can capture them if you have dry powder. In this case, we do have dry powder. But it’s not so much about bringing airlines in, because that’s beyond your control, but internationally, we can start to look at countries that want more airline development, “Hey, I can come and fly to you now. Now that we are both suffering, do you want to encourage us to be connected?”. So, those sort of opportunities, we can talk to countries who previously were, “We don’t like you to come.” Now, they would say, “Maybe you should come.” In terms of connectivity, you can increase opportunity.

The other thing is CAI, Changi Airport International, there will be a lot more airports that may need us, not just for investment but operational and management improvements: how do you handle the crisis. It has been reported that we have handled the crisis very well, Singapore as a whole. But the airport in particular, we are quite proud that we have managed it very, very well. So, we can export the system of crisis management to airports. These are the opportunities.

CT: Let’s talk more about your international airport business, what big projects are you eyeing?

CT: How difficult is it to bid for airport business in foreign markets? I mean, your international unit already has business activities with some 40 airports around the world, in Brazil, Russia, India and China.

LML: There are very few competitors in the first place, to be very frank. In the case of international airport business, very few. Very few players. But at same time, I must say that because Changi is so well-known, frankly, we’ve won over 600 Best Airport Awards in the world. Everyone who talks about coming to Changi is happy with us. So, anyone who wants to improve airport operation and their reputation will knock on our doors. In fact, we have customers calling us rather than us marketing to them.

So, it is a matter of how selective we want to be involved in the airport. It’s not difficult. It’s whether you want to get involved because it is profitable? We are just not chasing profitability. We are chasing other things like goodwill if you want to use that word. Like learning from them or learning the aviation industry’s competitiveness. Those are one of the few factors that we’ll be happy to look at. But not just profits.

CT: Let’s talk about your next big project, Terminal 5, Changi East. That’s going to be a biggest expansion to date, covering an area of 1,080 hectares. That’s equivalent to 667 football fields. That’s huge. Singapore has already 4 terminals, do we need another one so soon?

LML: Well, you say it’s small, but it is big. But airports around the world are much bigger. We are really sandwiched between two thousand hectares, two airports.
Think about it. Actually, T5 and what we call Changi East is another airport by its own right. So, we’re combining two airports within the area. It takes up space. We cannot be caught as an air hub without enough capacity.

The last thing you want is business is coming, but you don’t have terminal capacity or runway capacity. We will need another 50 million passengers in eight to 10 years’ time.

CT: And you are confident that in this case, supply will drive demand for Changi Airport?

LML: When we first started with Paya Labar to Changi, we had 8 million passengers and we planned 30.

Many government quarters said we were crazy. 30 million passengers? That’s six times or seven times of operation. But guess what? Today, we have double of the 30. We are at 68, doubled what we planned. So, our enthusiasm is not overstated, because the moment you can supply, people will come. Air hub is a very important economic contributor for us. It’s very important. It’s not just a number, but for the overall economy itself.

CT: The aviation industry we know is unpredictable, subject to economic conditions and disruptions. Is there room in your strategy to make some adjustments to avoid the problem of over-investment in case your projections don’t go according to plan?

LML: Well, we plan say for example 50 million passengers. But we always plan a modular system of expansion. In other words, if there are disruptions like the present, there will be opportunity for us to either delay it or develop it in stages. The plan is to build modularly, so you can stop somewhere. That’s always in our plan.

CT: So, with the completion of Terminal 5, where does that put Changi Airport in terms of scale and size compared to the rest of the airports around the world?

LML: I think we will be in the top few in terms of capacity, but we still cannot rival Beijing or Dubai or some of these airports.

CT: Do you want to be the largest?

CT: Let’s go back in your journey as a civil servant. One of your first project in the public sector was to actually build the first runway at Changi Airport 1 and 2. Life has come full circle for you. Now, you sit as Chairman of Changi Airport Group, you’ve been in this position for the last 10 years. You love the airport business? Can’t get enough of it?

LML: There are two loves in my life. One is airports, the other one is real estate. So, I think I will still put airports ahead of real estate, because both are challenging. As an engineer, you don’t get to build airports every time. So, technical challenges are very satisfying.

It’s very meaningful that when you fly, you can say that this is what I’ve done. This building where I am sitting is developed by me. I am going to land on a runway that I built. So, that’s the sort of effect you get – that you are the one who built this. That’s everlasting.

(Ed. This interview has been edited from the transcript provided courtesy of CNBC Managing Asia and Journalist Christine Tan.)