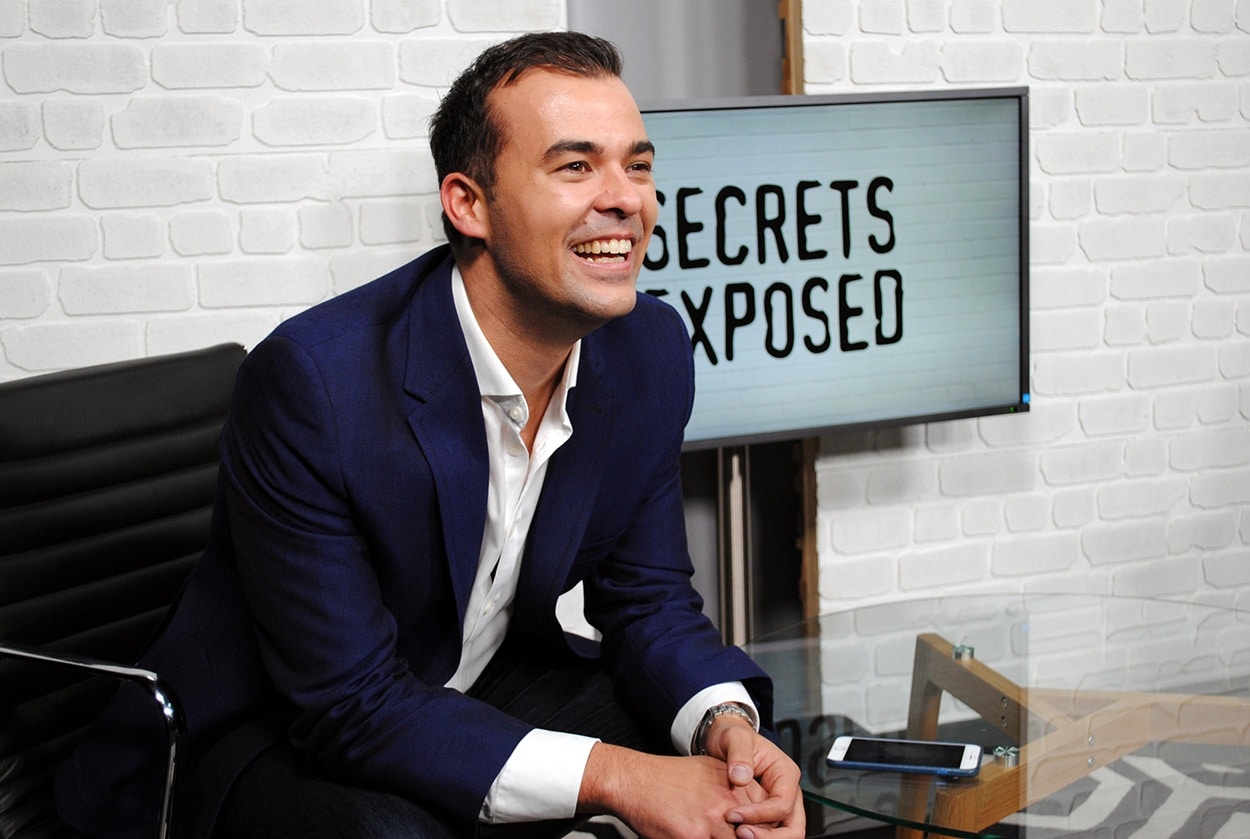 After starting his first business at 19, publishing 16 books within a three-year period and building a successful education enterprise by the time he was 30, serial entrepreneur turned technologist Dale Beaumont says he lives for the future. After successfully launching BRiN, a 24/7 business advisor app in 2016, Beaumont has big ambitions for building bots and benevolence.

In his keynote address at the I/O 2017 Conference in May, Google CEO Sundar Pinchai talked about the shift from mobile first to AI first approach. This shift requires a sharp reimagining, again, of how existing products can remain relevant in this new paradigm as well as opening up a space on future possibilities.

“Mobile made us reimagine every product we are working on. we had to take into account that the user interaction model had fundamentally changed, with multi touch, location, identity, payments and so on. Simarily, in an AI first world, we are rethinking all of our products and applying machine learning and AI to solve user problems and we are doing this across all of our products…just like with every platform shift, how users interact with computing changes. Mobile brought multi touch. We evolved beyond keyboard and mouse. Simarily, we now have voice and vision, as two new modalities for computing. Humans are interacting with computing in more natural and immersive ways. Let’s start with voice. We have been using voice across many of our products. That’s because computers are getting much better at understanding speech. We have had significant breakthroughs but the pace, even since last year, has been pretty amazing to see. Our word error rate continues to improve, even in very noisy environments,” says Pichai.

Indeed, Google’s speech recognition word error rate is improving drastically; consider 8.5 percent in July 2016 to 4.9 percent in June 2017. Google’s achievement is very significant. Only a few months earlier, in March 2017, IBM announced that it achieved a new industry record in speech recognition, with a 5.5 percent word error rate, claiming to have reached human parity, however, IBM researchers argue that human parity would actually be 5.1 percent. Regardless, Google’s claim to 4.9 percent, below human parity, is plenty food for thought.

According to University of Montreal’s Institute for Learning Algorithms Lab Leader Yoshua Bengio, reaching human-level performance in AI tasks such as speech or object recognition remains a challenge as standard benchmarks do not always reveal the variations and complexities of real data.

“Different data sets can be more or less sensitive to different aspects of the task, and the results depend crucially on how human performance is evaluated, for example using skilled professional transcribers in the case of speech recognition,” says Bengio.

Google’s 4.9 percent word error rate breakthrough (and we have no doubt it will keep improving) invites questions on how this might disrupt existing products in the market. One obvious example is voice recognition software used for personal identification.

In a feature published in the Australian Financial Review in May 2017, University of Montreal’s start-up Lyrebird claimed a breakthrough in voice imitation technology unveiling an algorithm that can mimic someone’s voice from just one minute of source audio.

With major organisations that have invested heavily in voice security such as Government services and the banking sector, this poses major risks in identity fraud.

According to US-based Nuance Director of Voice Biometrics Bretislav Beranek, the release of Lyrebird’s voice imitation API may lead to attempts at fraud. After releasing its first synthetic speech detection algorithm in 2014, over the past three years, Nuance claims to have secured 1 billion transactions for financial services customers alone in 2016.

No attempts at fraud using voice imitation have been recorded by Nuance to date, but when Lyrebird releases its application programming interface in 2017 Beranek says an attack is likely.

“Other voice imitation vendors have previously said twenty minutes of audio was the bare minimum, so for Lyrebird to say they can do it with one minute obviously opens up a lot of new possibilities for use…The double-edged sword of banks and governments deploying voice biometric security is that fraudsters get more interested in how to fool it,” says Beranek.

While there is no known fraud attempt using voice imitation so far, voice modulation technology (VMT) is a common tool used by fraudsters to shift the pitch or stress of their voice, to mask aural fingerprints. While VMT is fairly basic, Nuance argues synthetic voice is easily detectable by its software.

One Sydney-based entrepreneur who understands this race all too well is BRiN CEO Dale Beaumont.

After building a successful business advisory school, Business Blueprint, Beaumont was looking for a new challenge. In 2016, Beaumont launched BRiN, a 24/7 mobile app that uses a logic-based approach to provide personalised business education services to SMBs. After its first iteration, Beaumont is now working on refining BRiN to be more AI-centred, with a greater capacity for deep learning.

“BRiN has been an amazing journey. We started with a lot of ambition; to reach a million business owners. There is 500 million SMBs around the world but only one percent have access to a business advisor. In a way, I automated my role through BRiN. We can only help 500 businesses the way we are structured, but if we could help millions of people, then ultimately BRiN was about impact, achieving scale. In many developing countries business advisors don’t exist, a good business advisor costs around AUD5,000 per month and half of the world’s entrepreneurs live on less than twenty bucks a day… So BRiN is really for SMBs who want access to quality business support,” says Beaumont.

According to Beaumont, he was quick to identify the market moving to an AI-first approach and was keen to get ahead of curve.

“We have seen every industry impacted by tech. I looked at my own business and wondered what would it look like in five years’ time? We wanted to be on the front foot of that change. I’ve never run a tech company before, so I had to tap people way smarter than me. My biggest value is growth, and I saw that this tech wave was getting bigger and bigger. Every company is going to be a tech company in some way in the next decade, and we need to be prepared for it,” says Beaumont.

With the second iteration of BRiN is well underway, Beaumont is setting his sights on developing a mass-market bot. Beaumont’s project is also frustrated due to the current limitations on voice recognition technology but once it’s resolved, Beaumont is certain anything is possible.

“You know that when you’re hitting the same problems that Microsoft is trying to solve, that’s a good thing. I have a product to build. I feel I’ve seen the future early, and now I’m waiting for the big guys to catch up and solve this problem for me. Building digital assistance is going to be a macro trend over the next five years. Every big company will need a digital brand. Apple has Siri, Microsoft has Cortana, IBM has Watson. Now it’s coming down to everyone else. All call centres will be automated. That’s where we are going, so we are working on a tech platform where we can build digital assistance at scale, and license our technology to build digital assistance for other major brands,” says Beaumont.

Now 36, Beaumont had an unconventional start to his career, starting his first business at 19 with his best friend from high school, who remains one of his business partners today. After completing Year 12, Beaumont didn’t want to go to university, nor did he consider himself academic – as a teenager Beaumont was an award-winning national champion in gymnastics and while he says he has always been a lifelong learner, he is also dyslexic. Despite these seeming set-backs, what makes his story remarkable is that he made his fortune in education.

“Uni didn’t appeal to me. I focused on my sport. I just knew I wanted to help people. I couldn’t see myself studying for another five years, but I always had a desire to learn, I just think there’s many ways to do it. My passion was business and education – so I put them together. Education turns value into success. Education is for life. It’s a bit ironic, I’ve published a lot of books but I’m dyslexic. I was a bad reader and terrible at spelling. Every week I was forced to learn to read and through determination I had to do it. reading doesn’t come naturally to me, but it’s never stopped me. People who don’t want to learn will fail,” says Beaumont.

For Beaumont, his primary driver for success in business is his desire to help others. A self-confessed workaholic, Beaumont knows all too well the pitfalls of not finding a distinction between personal ambition and identity.

“I think if work defines who you are, that’s a problem. Work is what you do, it’s not you. I’ve seen a lot of people make work their whole identity, and at some point, if you’re out of a job, you need to function without your work. I know this because I experienced it with sport. I trained for 15 years as a gymnastic and the weeks after I stopped, it was tough. A lot of athletes go into serious depression once they realise they are just like everyone else…So your outlet has to be something not related to work,” says Beaumont.

According to Beaumont, self-worth should never be based on career achievement and says for him, true success is about positive impact.

“I can honestly say I have a fear of failure. Everyone knows me as the guy who achieved a lot, but can I continue it? I think the next generation measures success more on character than asset wealth and accolades. If you make money, what have you done in terms of impact? Life is more about experience, not about what you own. At the end of the day, he who dies with the most amount of toys still dies… There is an obsession in the West that money is the measure of success. But it’s not. How active is someone in their community? Are they kind to their kids? These are successful measures. Ask yourself what can I give back, rather than what can I just take from the world? Have I used my privilege wisely?” says Beaumont.

The question of privilege came to the fore, after an interview with Peter Baines OAM, a talent from one of Beaumont’s books in his series, Secrets Exposed. After taking a trip to Thailand after the 2004 Tsunami that killed 250,000 people in one day, Baines was deployed by the Australian Federal Police to help with the aftermath – which came to be known as the largest natural disaster in recorded history.

“After the Tsunami, a lot of farmers, mothers and fathers working in the fields perished and orphaned tens of thousands of children who went to school in the hills. When Peter returned to Australia, he founded a charity Hands Across the Water to build an orphanage for these kids. It’s 100 percent volunteers, so all funds go directly to the kids. I really wanted to support this charity, so through the efforts of our team and clients, we raise AUD400-500K per year and in 2016 we raised AUD1 million. I don’t want praise. It gives me a reason to get out of bed. And it helps our staff to realise that we work not just to make money, but to make a difference,” says Beaumont.