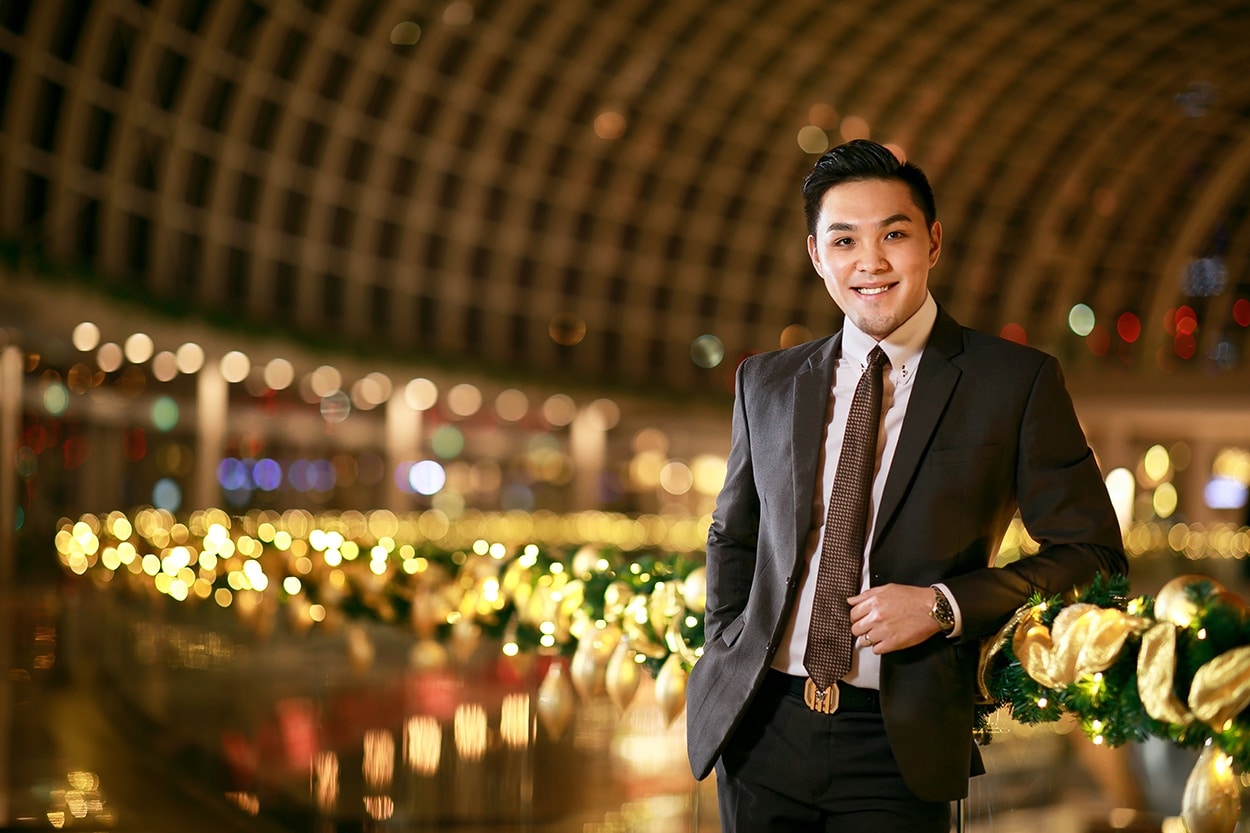 Singapore is not known for its agriculture, but Agrivo International CEO Dato’ Joel Low is about to change that, with the launch of the largest agri-tech farm in Asia and a world-first Global Agricultural Exchange in 2019.

According to the World Government Summit report released in February 2018, the UN Agenda for Sustainable Development included a commitment to end world hunger by 2030. As of 2018, approximately 800 million people worldwide go hungry, and based on current projections, 650 million people will suffer from malnutrition by 2030. As population growth is projected to reach 11.2 billion by 2050, The UN Food and Agriculture Organisation claims 70 percent more food will need to be produced to feed the global population by this time.

The report claims that the agricultural market share of global GDP continues to decline – indicating traditional farming methods will not meet worldwide demand due to scarcity of natural resources, food waste and demographics.

On the demographic front, consumer behaviour trends towards a higher demand for animal protein, driven by increasing urbanization and rising middle-class incomes. The effects of increased meat production on the environment has been widely documented; according to the report, raising livestock accounts for nearly one-fourth of all global water use in agriculture.

As food demand increases, the rural population continues to decline – and those that remain, reflect an ageing population lumped with increasingly degraded farmlands. According to the World Summit report, 25 percent of all farmland is already rated as highly degraded and water resources are stressed with more than 40 percent of the world’s rural population living in water-scarce areas. Traditional agriculture methods is a primary cause of farmland degradation, caused by deforestation, improper fallow periods, reduced crop rotations, livestock overgrazing and excessive fertilizer use to increase yields lead to soil nutrient imbalances.

Current food waste wastage is estimated to account for 25 percent of all fresh water consumption globally, with up to 50 percent of all foods produced globally never eaten. Food wastage is a massive market inefficiency, with hunger not just reflected in developing nations. In the UK, over 1 million people accessed a food bank in 2017, and the US, 40 million Americans live in food poverty.

Faced with the impending challenge of sustainably feeding everyone, the market is witnessing a rise in Agri-tech start-ups and innovation, including 3D printing of foods, cultured meat, seawater agriculture, and high-tech vertical farming including the use of AI, sensors, automation and IoT systems to increase efficiencies, reduce food and resources wastage and pesticides usage, while increasing yields across the entire value chain.

Across the Pacific in Singapore, Agrivo International CEO Dato’ Joel Low is leading the charge in agri-tech in Asia, with ambitious plans to expand into a three-stories, 210,000 sq feet high-tech vertical farm in Singapore which will make it the largest of its kind in Asia by the end of Q1 2019.

After completing his degree in Hospitality, Dato’ Low started his career as a Sommelier. In early 2010, Dato’ Low’s early entrepreneurial ventures were in restaurant acquisitions before venturing into property development in Cambodia through Agrivo International, an agriculture investment and management company. As a co-founder, Dato’ Low is responsible for managing Agrivo’s subsidiaries ranging from established SME’s to new start-ups.

“I have always loved the food industry, and as I began to understand more about agriculture, what goes into the growing process and sustainable farming practices, we started investing in pepper plantations in Kampot, Cambodia. Kampot Pepper is currently double the world pepper price because it is highly aromatic with intense flavour profiles. As a trained Sommelier I take aroma seriously,” laughs Dato’ Low.

According to Dato’ Low, pepper takes three years to harvest, so to ensure income between yields, his company diversified by purchasing organic mushroom farms in Malaysia; the harvest is two weeks from seed. They also diversified into traditional farming fruit plantations in Indonesia, including papaya, watermelon and Calamansi.

“There is a huge demand in Asia for mushrooms. Besides fresh produce, we recently launched our Mushroom Kingdom Shrooms Bites [dehydrated mushroom chips] and we also have Mushroom Growth Kits which we give to educate students as well as corporates on how mushrooms grow, which everyone loves. The younger Singaporeans do not know where our food comes from, so we partnered with the Ministry of Education to go into schools and teach kids how fresh produce is grown,” says Dato’ Low.

Dato’ Low, now 31, says Agrivo International’s expansion into high-tech farming in Singapore is a natural progression not just for them as a portfolio company, but for the greater benefit of contributing and investing in, best agri-tech farming practices for all. Dato’ Low says that the amount of vegetables his organisation proposes to grow in its vertical-farms would not be enough to feed all of Singapore, but ultimately as a company, he says they work towards meeting ESG targets annually.

“Every year we go to Japan and the US to not just discuss sustainability as a business, but the benefits of encompassing environmental, social and good governance wholistically in the agriculture sector. High-tech farms in general – the ideology of it – in today’s social norms, means that the younger generations are just not into farming. We want to invite young talent to get excited about agriculture again,” says Dato’ Low.

“I’m glad I went into this business. As long as people need to eat, we need to create longevity across the entire food value chain. In Agri-tech farming, water is recycled, we only need 1-2 men up to 5,000 sq feet to manage a high-tech farm because everything is managed through technology. We see high-tech farms in the future having a centralised headquarters, which has screens of every agri-tech farm which will be managed via IoT sensors. While the application of tech in farming is not yet as comprehensive in Asia as it is in the US, we hope to drive not only greater adoption but encourage graduates to create and improve the tech across the entire agri industry,” says Dato’ Low.

One way that Agrivo International aims to help contribute to the UN 2030 Agenda on Sustainability, is the establishment of its Global Agricultural Exchange (GAX) – which will go live by Q2 2019.

Dato’ Low says the ultimate objective of GAX is to revolutionise the agricultural sector’s eco-system, based on stringent ESG criteria. According to Dato Low, by using blockchain technology, GAX will ensure total transparency and traceability from the farm to the table, providing proof of origin of produce, as well as increase farmers profit margins and enable restaurant brands to showcase the best of proven local produce.

“The GAX platform connects producers to domestic and international markets, leading to the improvement of farmers’ incomes by creating the world’s first licensed token sale platform and tokenized utility exchange for agriculture. This will help farmers achieve a much more sustainable income (up to 50% of profits will go to the farmer) along the entire supply chain world-wide. We are very excited about this project, because it’s about making an impact across the entire sector, especially in the ASEAN region. This platform will give all Agri companies an e-market place, like an online grocer, to connect them to B2B and B2C consumers and see who and what comes from where,” says Dato’ Low.

According to Dato’ Low, his conception of GAX was not about trying to do something new, but rather, create a greater efficiency and more buying opportunities for farmers to list their products.

“As a portfolio company, I want to create a platform to create more businesses, rather than me just investing in one or two businesses. Food will continue to be a global problem and we will work with larger producers as well as co-operatives to help the community as a whole. We also want to engage the hospitality industry, restauranteurs and hoteliers…we want them to tell their consumers that the produce is GAX sourced so consumers know that what they are eating is sustainably produced and harvested across the entire value chain which will be transparent on the blockchain,” says Dato’ Low.

According to the World Government Summit report, Blockchain in agriculture may reduce food labelling fraud, improve food safety and transaction times. By improving traceability in supply chains, it can enable regulators to identify the source of contaminated foods as well as reduce food spoilage by identifying lag indicators across the supply chain. It can also prevent price extortion, delayed remittances and eliminate middlemen fees, leading to fairer pricing of smallholder farmers’ crop values.

To help ensure integrity, Dato’ Low says Agrivo will deploy audit teams across the ASEAN region to visit farmers who want to list an ICO on the GAX platform.

“We will carry out physical inspections and make sure our partners meet our ESG criteria. It can be all kinds of farming but the most important criteria is that you cannot fake your source. My experience in the food industry leads me to believe that it will become a social norm in the future for people to care about the origin of their food. Whether we like it or not, agri-tech farming is here to stay for as long as the population grows, we need food!” says Dato’ Low.