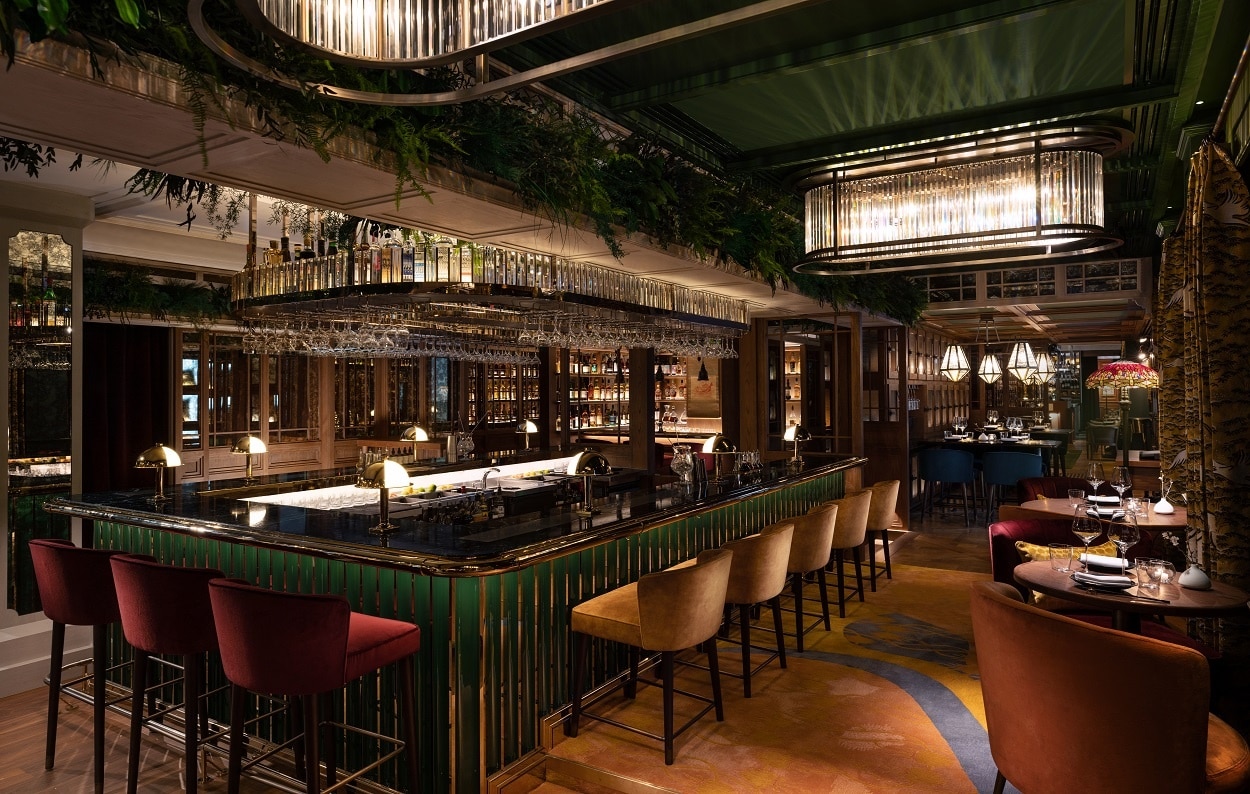 Maximal Concepts and Mandarin Oriental Hong Kong opens The Aubrey this week, an eccentric Japanese Izakaya that promises a journey for hungry minds.

Mandarin Oriental Hong Kong General Manager and AVP Operations Pierre Barthes says the space will feature three distinctive bar experiences, as well as a drawing room, a curio lounge and a leading culinary team, which he claims will form the city’s most creative hospitality destination.

“The Aubrey represents a significant moment of renewal for Mandarin Oriental, Hong Kong as we have completely reimagined our 25th floor to celebrate the city’s reputation as a cultural crossroads and an iconic travel experience. This vibrant, beautiful and multi-faceted space celebrates the very best of Japanese drinking and dining in a city which embraces other cultures like few others,” says Barthes.

Set to be a home-away-from-home for guests, Barthes says the Aubrey is inspired by ‘the journey of a hungry mind’ and channels the vibe of Japanese izakayas in Ginza. High quality Japanese ingredients and traditional cooking techniques are promised for guests to enjoy culturally rich beverage and dining experiences.

Leading The Aubrey’s bar program is Devender Sehgal, most recently bar manager at Otto e Mezzo Bombana and a popular and renowned drinks professional celebrated in Hong Kong and India. At the first of The Aubrey’s three bars – known as The Main Bar – Devender and his team says a core selection of Highball and Chuhai cocktails , a signature cocktail menu inspired by the game of chess and a rotating selection of three seasonal cocktails based off a singular Japanese ingredient.

The second bar is the four-person Omakase Cocktail Bar which reinvents the omakase experience and where resident bartenders promise to take guests on a unique drinks journey across Japanese spirits and flavours. Finally, the third bar – The Champagne and Sake Bar – will celebrate the age-old tradition of oysters and champagne, while also playing with sparkling sakes.

Dining at The Aubrey falls under the watchful eye of Chef Yukihito Tomiyama, a Japanese national most recently at the one Michelin-starred Shinji by Kanaseka in Macau. At lunch, elevated bentos are created with decades of core Japanese cooking experience. Presented in beautiful hand-crafted wooden boxes, their layers reveal fresh ingredients made with impeccable technique from The Aubrey’s raw, tempura and robata menus.

Guests will also appreciate the world-class sushi and sashimi skills of Chef Tomiyama and his team, specializing in traditional Edomae sushi-making techniques. The robata grill takes diners on a journey from the ocean to the soil where prime ingredients are cooked over binchotan charcoal, while the tempura menu shows the cuisine’s art, craft and lightness.

According to Maximal Concepts Co-Founder Matt Reid, sustainability is one of the key tenets for both Maximal Concepts and Mandarin Oriental, Hong Kong, impacting every decision taken at each level of the development of The Aubrey.

Reid claims the venue uses a world first viable compostable clingwrap to bamboo and paper products from sustainable sources. He says The Aubrey is as much as possible zero-waste with the goal to remove single-use plastic from all operations.

He says the vision is to be a pioneer and educate in the sustainable hospitality space.

“Mandarin Oriental, Hong Kong is one of the world’s most storied hotels, a global bastion of travel for more than half a century, and The Aubrey is set to honour the incredible cultural elements and exchanges that have happened here over the years. Creativity is like pollination in that one idea has to come from another source and nothing promotes it more than the sense of wonder, curiosity and discovery of food and travel,” says Reid.