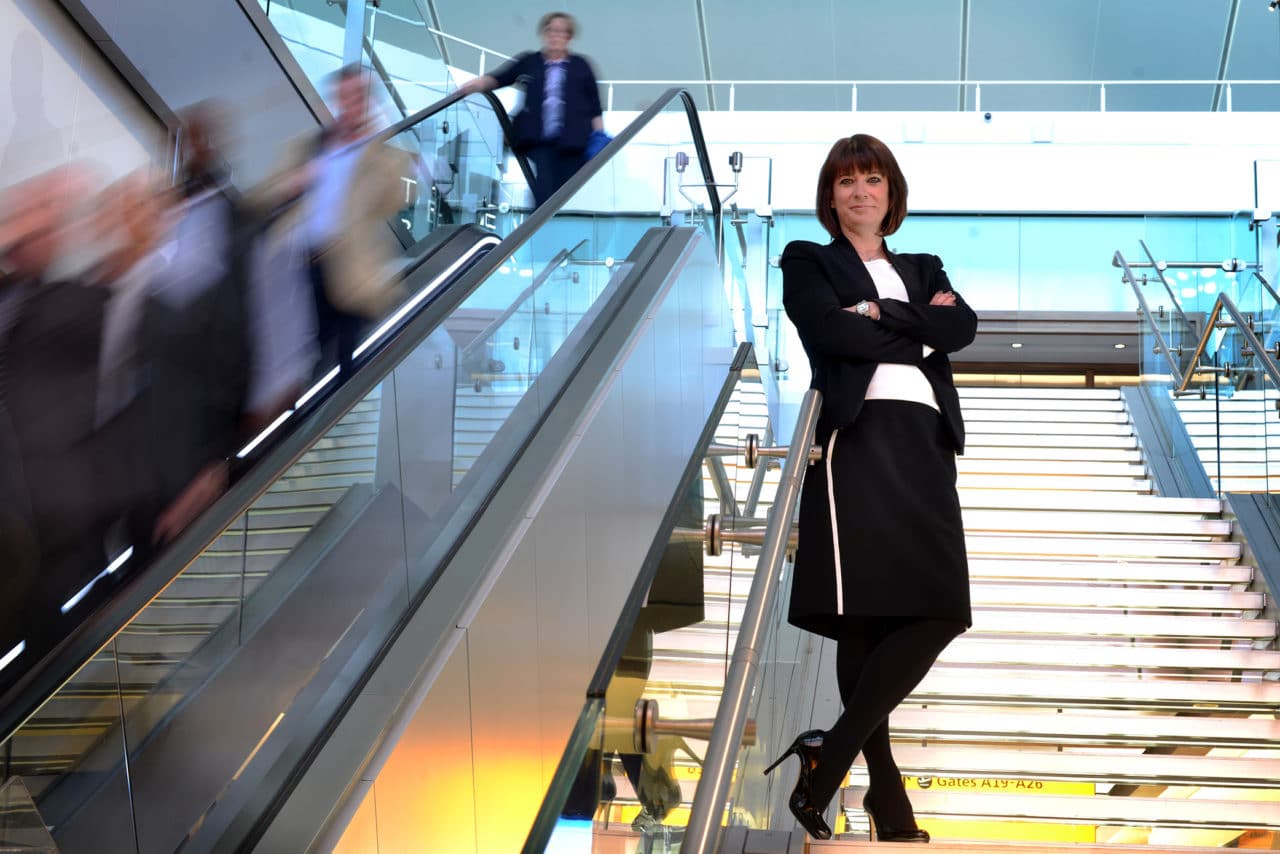 After the world recovered from the shock of Britain voting to leave the EU in June 2016, socio-economic and political uncertainty still prevails. However, if the recent green light by the UK Government in October 2016 for Heathrow to proceed with the hotly-contested Heathrow Airport expansion is anything to go by, one could argue that the sheer scale of this project is exactly the kind of nation-building program the UK needs to bridge ideological divides and move forward together towards a hopefully, economically prosperous outcome for a Post-Brexit Britain. We chat with the extraordinarily talented and empathetic Executive Director Expansion, Emma Gilthorpe whom is responsible for delivering this once-in-a-generational opportunity.

When Heathrow first become a civil airport in 1946, it was surrounded by fields and green pastures. Fast track seven decades later, with the first proposal to expand Heathrow starting from early 1970s, after decades of opposition from special interest groups, political posturing, local constituents adapting to an ever-increasing urban density around Heathrow, competing interests between heavy industries and just the basic logistical challenges an expansion would entail, it’s little surprise that expansion has been decades in the making.

As the UK’s major hub, Heathrow is the world’s second busiest airport which is currently running at 99 percent capacity. The airport expansion project, which includes a third runaway and a sixth terminal, will be executed over three phases over a nearly 25-year period to completion with an estimated cost of around £16 billion.

The winning argument to finally proceed with the expansion after decades of political argy-bargy, particularly given the post-Brexit climate in the UK, is perhaps the long-haul connections that will be needed now more than ever with UK’s offshore trading partners to grow its economy. Early projections suggest that the Heathrow Expansion will create 180,000 jobs in the UK alone, with an estimated £211 Billion worth of GDP impact.

Delivering a project of such scale, under a high degree of public scrutiny and sensitivity (and rightly so) while balancing shareholder expectation is not for the feeble-minded. Heathrow Executive Director Expansion Emma Gilthorpe is working through phase one of the expansion, the planning phase from now to 2020.  According to Gilthorpe, the macro-economic implications have been centre-stage in public debate, but there is also a very positive impact on the local community that’s worthy of discussion.

“Perhaps the story that doesn’t get told so well is the huge local benefit expansion will bring. The design and construct and ongoing maintenance will create 40,000 local jobs and one of our objectives is to deliver 10,000 apprenticeships for our local communities.  On a personal level, playing our part in ending youth unemployment in our area would be a great outcome for everyone. At the moment, we have 7,000 people employed directly at the airport. On top of that though we have 70,000 colleagues working for other businesses at the airport.  From construction workers, ground caterers, retailers to even a veterinary unit. Pretty much every job bar an astronaut is available at Heathrow. We want to make sure we connect the local community much more closely to the skills needed here.  We are going into primary and secondary schools, getting them excited about the varied careers they can have at Heathrow into the future,” says Gilthorpe.

The planning phase involves development and submission of the master plan to the planning inspectorate in 2019.  Approvals are expected to go through in 2020, with the project moving into the construction phase, with spades in the ground by 2021. The runaway is scheduled to open at the end of 2025, with the new terminal capacity coming on stream shortly after.

After retaining Global Architectural firm, Grimshaw as the concept designers after being shortlisted between three other UK firms Zaha Hadid, HOK and Benoy, Grimshaw is teaming up with program partners Arup, CH2M, MACE and Turner & Townsend to deliver a more sustainable, integrated and adaptable terminal for future expansion.

“We chose Grimshaw because their concept was a very sustainable, lightweight design that allows us to manage the heating and cooling of the building very efficiently. It’s also a modular design so it’s easier to add new capacity.  Heathrow has some iconic buildings Terminals 2 and 5 are renowned internationally not only for their passenger experience but architectural quality. We were very keen to look at how we can take that concept further; as 2 and 5 is made of glass and steel, they’re beautiful but not necessarily easy to expand,” says Gilthorpe.

The challenges of environmental footprint and choice of sustainable and flexible materials aside, passenger experience is a major consideration for the expansion project, and Gilthorpe says that her team is delving deep in the research process to deliver an aesthetic that helps to ease travel anxiety too.

“Terminal 6 is being built with a thirty-year horizon. If we look at how passengers currently consume airline products and services now, to thirty years earlier, things have changed beyond recognition. Most people check in on line now rather than with an agent. So projecting future travel trends helps us determine a space that is fit for the future… Will people be bringing a bag to the airport in ten years’ time or will someone collect it from their doorstep and unpack it at the hotel for them before they arrive? These are some of the strategic issues we are grappling with. Our research involves studying how the best airports in the world work. Changi airport in Singapore is considered one of the best…what do passengers and airlines love about it? Atlanta airport in the US has an amazing transfers and hub product, so we ask why are they good at what they do? We are cherry picking the best elements from everywhere, projecting them forward, to say, how would that model remain relevant in 30 years’ time?” says Gilthorpe. “We also want to take the opportunity to create plenty of green space, both for our local community and our passengers.  An airport can be an anxiety-inducing place, so designing spaces that create a sense of calm and light are good for evoking a sense of calm”.

Given the constrained footprint and high-density population surrounding Heathrow airport, the construction implications are understandably met with community resistance. One way Heathrow says it will aim to mitigate local anxiety over the construction phase of the project is to engage off-site logistics and manufacturing hubs.

“We want to achieve a lot of the component manufacturing off-site so rather than having to bring thousands of people onto Heathrow, which is a very busy two runway environment, over the next few months we will launch a tender for four off-site logistics hubs and we will use those to convene a variety of different components for the build and they will then be brought into Heathrow once we are at a certain stage of development. That will help us from a constraint perspective and help reduce local road congestion,” says Gilthorpe.

With 80 strong team today that will expand to 200, after two months in the role, Gilthorpe is responsible for creating a program team that will cover everything from core program capabilities, cost and design, planning consent, and commercial and community stakeholder engagement. What makes Gilthorpe an unusual appointment for this role is her background is law, rather than engineering. For Gilthorpe however, it’s a natural fit, given this phase of the project involves little construction.

“I do get some very quizzical looks, not only that I’m a woman in this role, but because my career hasn’t been built in construction. My skill set comes from years of managing very complex stakeholder environments. I worked in telecom for many years, I was involved in the roll out of super-fast broadband and Government Policy. At this early phase of the project there are a host of policy and legal issues, but most importantly, working through stakeholder interests. The desire for commercial outcomes needs to be balanced with the community desire to make sure we invest responsibly in the area,” says Gilthorpe.

For Gilthorpe, managing stakeholders effectively is about setting a clear strategic direction, and then striking a delicate combination of listening, transparency and establishing trust quickly – whether that be with internal or external stakeholders, Gilthorpe says that giving people space to come to conclusions on their own terms will help people buy into the journey.

“I never double guess people. The most underused skill in leadership is listening. After years of learning how to perform your role, it’s easy to make the mistake of thinking you know the answers. It’s not true. We have complex stakeholders and we won’t know all the answers to every challenge. So collaboration and listening to all perspectives will deliver the best outcome. The only time when I’m directive is when I’m setting out a vision for something because ultimately the leader must take the lead in defining the long-term aim. It’s far more satisfying to see an individual come to their own realisation, either through coaching or encouraging without directing, because then they will feel ownership over their decision, which gets you buy in,” says Gilthorpe.

According to Gilthorpe, the expansion project’s success will rely on establishing trust within the team quickly, and says that it’s okay for leaders to show vulnerability through disclosure – as one way to build team cohesion.

“Building trust is about disclosure. Sharing things about yourself beyond business speak. What is your core purpose and personhood? To create the right environment to have those kind of conversations is a quick way to get people to bond with you. It’s important that people see you as fallible because at some point everyone fails so keeping it real, regardless of where you sit in the hierarchy means failure won’t mean loss of trust. I share my excitement and heartaches with my team…Moving from a role as Strategy Director into a delivery role has been interesting for me. I was scared in the first month as it took me a while to make the switch and realise the magnitude of what I was taking on. My mentor, an old friend and colleague said to me, ‘if the next job you take on doesn’t scare you, then you shouldn’t take it on’. That was advice I needed to hear,” says Gilthorpe.

“Conflict can’t always be avoided. It is important however, to be fully transparent about what you’re doing and give your audience time to process the news. Very high levels of trust are only brought out of believing the person you’re engaging with is being straight with you. You don’t have to like each other to trust each other but you have to believe you’re being given straight facts whether it be good or bad,” says Gilthorpe.

With four months into a 25-year project, Gilthorpe is pragmatic about the challenges she will face in delivering such a high-profile project, which will have far reaching impacts beyond the South East of England. When asked about what a successful delivery looks like for her, Gilthorpe was quick to respond, which suggests the strategic direction of the project is already clearly defined –

“Heathrow is more than just a runway. It’s easy to fixate on the Design and Construct, but our greatest achievement will be measured by the opportunities the expansion will create in connecting people and product to distant markets.  It’s a transformational project for local and international communities and that’s a point of pride for me,” says Heathrow Executive Director of Expansion, Emma Gilthorpe.