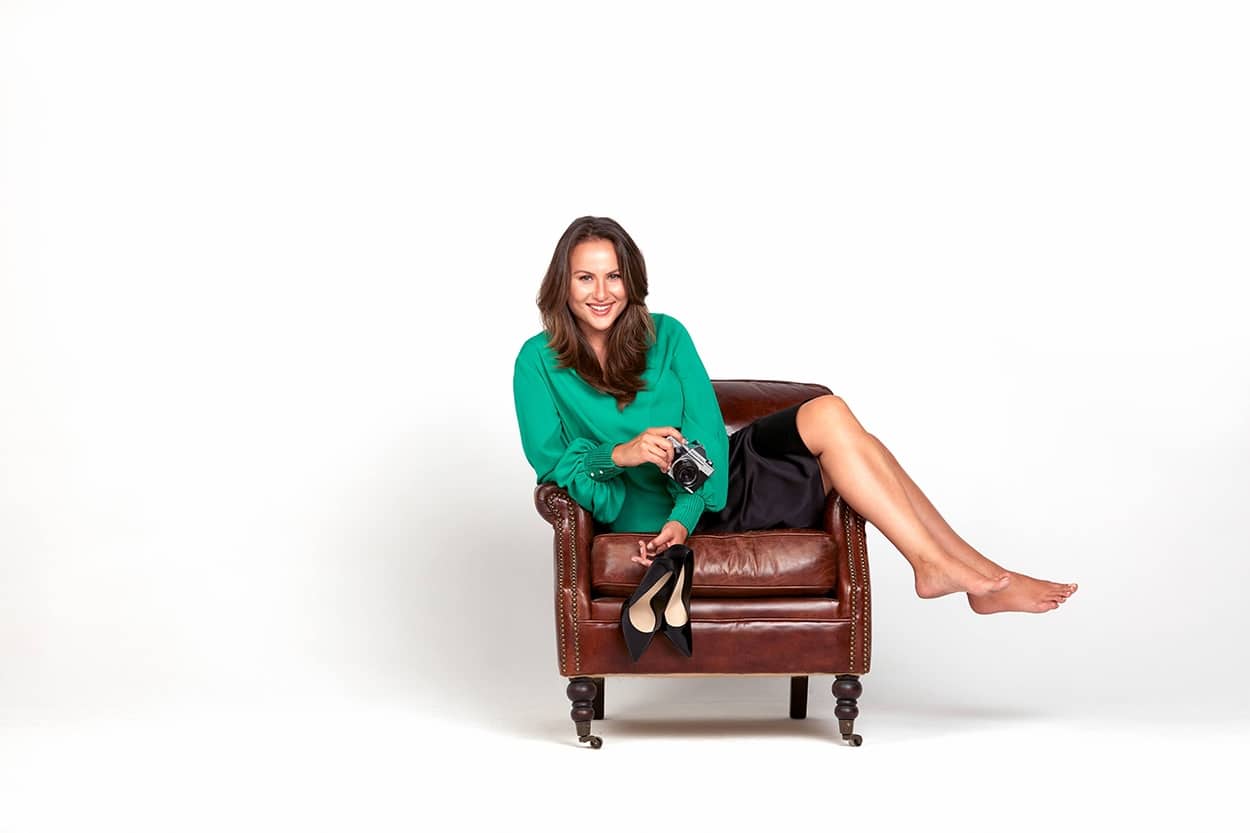 One of the most introspective Australian Artists to burst on the art scene in New York City with her solo exhibition, Postcard from Australia, is former Celebrity Photographer, now self-confessed Fine Artist Hulia Boz. We spent a quiet evening unpacking Australian perspectives in art and why following one’s dream is nobody’s business but your own.

At one point in time, many of us have had a moment, or few, sitting on a park bench, mulling over our life choices. When the time came for photographer Hulia Boz to have her own ‘woman in the mirror’ moment, it came not from within, but was affirmed through conversations with both a close relative and a stranger.

“I always wanted to be a photographer. I was granted a scholarship to attend Art School but was not allowed to go. I came from a conservative family that valued education dearly. My father insisted that art alone would not pay my mortgage so I went to university first, became an art teacher and completed my Masters in Art Education later,” says Boz.

At 31 years, after teaching and travelling for eight years, Boz says photography was a constant fixation. When she received news of her grandmother’s ill health, Boz asked her if she had something to say.

“She said to me, kid there’s three things that will set you up for life; travel while young; follow your heart and always aim high. I said to her that I wanted to be photographer – and she gave me motivation to do it. I thought I was too old, and she encouraged me to not waste my life thinking, ‘what if?’” says Boz.

The very next day, Boz walked into a camera shop and invested AUD 28,000 on camera equipment.

“I bought everything I wanted. As I walked out of there, I felt torn. I did it, but, did I just make a big mistake?” laughs Boz.

“When I received my pay slip it shocked me. I realised the world had changed. It was no longer about a university degree or clocking nine to five. It was about application. I did a studio celebrity shoot for no more than an hour’s work and I was paid six thousand dollars. Much more than a teacher makes in a month!” says Boz.

Five years later, after having the best seats in the house at concerts, access to red carpets like the Oscars and Grammy Awards’ Nights, Boz found herself at a cross-roads.

“In the beginning, my life felt like that scene in The Devil Wears Prada, when I walked into the building, it was overwhelming. There were massive front cover images on the wall and it was so different to teaching. I was photographing Brad Pitt, Elton John, Prince and the like, but I couldn’t have a conversation with the subject. I learnt that ninety percent of paparazzi shots are set up. An agent calls the press and says, ‘so and so is going to cross the street to get pizza in an hour, can you have a photographer take the photo with the name of the shop in the frame please?’ After a while, I just thought, what am I doing? I want to shoot what’s real…” says Boz.

According to Boz, she was not certain whether it was a change of heart, maturity or simply boredom that precipitated her desire to pivot. For her, something had to shift.

“I don’t know exactly what it was, but I knew that this was not something I wanted anymore. The thing is, people hate paparazzi but what I realised in life, is that everyone has a price tag. A high school teacher will work two years to maybe save twenty thousand dollars and a paparazzi might get a cheque for the same for five minutes work. When money comes easily, it is a cause for reflection – on whether it is moral or not,” says Boz.

After researching extensively into aerial photography, Boz says she found herself, again, at a juncture; she loved photography but needed to change the tone of conversation.

“I thought, am I bored with photography or is it the subject? I was researching aerial photography as I have always been the kind of person who needs to sit by the window when flying. Practically, it is hard to change focus, take a risk, as we all have obligations and debt… I realised how expensive it is to ride in a helicopter! It’s 60 to 130 per minute. That was cause for hesitation!” says Boz.

Later that month, Boz found herself contemplating her next leap of faith on a park bench at her local dog park in Coogee. Sitting next to her, overlooking the ocean, was an elderly gentleman.

“He asked me to describe the day. So I described the ocean for him. He interrupted and said, ‘I’ve been blind from birth. Describe it by sound’. Just then, a helicopter flew over the ocean and I thought here I am thinking about money and this guy has never seen the colour blue… So l left and called the helicopter company for the sixth time, and they were like, ‘Ah! It’s you again!’ I asked them to take me up that same day. The minute I got into the chopper I knew that I had found my passion. The feeling in my heart, soul and mind was that I wanted to do this for the rest of my life. We took off from Sydney airport, and I asked him to take me back to the park where I was sitting earlier that morning. We hovered over where the blind man asked me to describe the ocean and I took my first shot. When we landed, every single shot after that first frame, was blurry but that first shot was so sharp! It was perfect,” says Boz.

The next few rides, Boz experimented, honing and making adjustments for the speed, distance and movement to get her images into focus.

“That first shot cost four thousand dollars. I went up the next day to learn where I had gone wrong. It took about ten thousand dollars’ worth of rides to get it right. But it was so worth it. That elderly man changed my life. I promised myself, that if I ever had my first art exhibition I would donate the proceeds of the sale to the Fred Hollows Foundation. Within one month, I had my first exhibition in Sydney, and I was blessed that this image ended up making a difference to 756 children living with impaired vision, thanks to a very generous buyer,” says Boz.

According to Boz, now 37, art patrons have been surprised that Boz managed to achieve a solo exhibition in New York City after only a seemingly two year shift in discipline. There seems to be a perception when someone does break out in their industry, the public are rarely privy to the grind and graft behind the scenes. We asked Boz if she felt that the timing, and particularly when it comes to her own artistic expression, perhaps her former training in art education has informed her art, in terms of having contextual experience, which perhaps, is why the composition of her works are so arresting, both in terms of structure and colour.

“My background in education was instrumental in helping me go through this journey to find my passion. Each day, every mistake and trial, from teacher to celeb photographer all learning on the way, and all those ingredients make my work what it is now. Even as a young child, I used to take my mum and dad’s old camera that didn’t work to school, and the shutter still worked and made the noise and the kids would crowd around me and I would pretend to take their photos so from day one, my career was in the making. It wasn’t overnight,” says Boz.

To this end, we asked Boz whether the process, rather than the product is what brings her so much joy in her work. Prior to digital, film SLR was the norm and most photographers share the same sense of magic in that they don’t know what they have shot till the film is processed.

“I catch myself when I’m in the sky. It’s eighty dollars a minute, and I can’t digest what I’ve shot as the meter is running. I just grab the shot, and what I love is that it is nothing like a studio environment where everything is perfectly conscious, planned. Aerial work is a field of opportunity of the unknown. No matter how many times I fly over the same space, it will always yield a different frame. I’m never bored. I work with the pilot and I don’t have full control. The anticipation and not knowing what I’m going to shoot and what I will produce is exciting to me,” says Boz.

Given the pleasure Boz says she feels hanging from above, we wondered if Boz would ever consider using drones?

“Firstly, I can’t print more than A3 size with a drone. The quality is a world apart. When you’re shooting with 53 megapixels compared to 12 it’s a big difference. I have one of the best drones on the market, but with my camera I can print to a very large scale. But again, it’s that being in the moment. How I feel when I’m looking down the barrel of my lenses, that’s my paint brush. My camera in hand, with my hair blowing, my harness straps hitting my face, my shoe about to fly off, and I’m in the zone trying to capture that perfect frame. That is a huge adrenalin rush for me, the process I go through to capture a moment that someone might like to hang on their wall,” says Boz.

There is a reason why Boz’s work is in such high demand. For those who are unfamiliar with Australian landscapes, it is a land of vastness, contrast, bright light and, one may argue this sense of space is often portrayed in Australian Artists’ works; whether it’s expressed in image, music, literature or film, there is this nod to an expanse, long lines, dotted and craggy terrains, dense colour saturation, singularity and isolation. In a frame, her bird’s eye perspectives seem to encompass and convey these themes in both a very disciplined, (perhaps through her art education) yet un-affected way (through the urgency of an aerial medium in which she captures these arresting figures).

Interestingly Boz feels that her work is comparable to John Olson, particularly when she is flying above Shark Bay in Western Australia.

Boz has also likened her work to Indigenous landscapes, and given the likeness, it’s hard to disagree.

We didn’t ask Boz whether she references the work of Australian Painter Frederick (Fred) Ronald Williams OBE (1927-82) – but from our perspective, we feel our comparison is what makes her work truly exciting.

For anyone familiar with Williams earlier works, particularly in the 1960s and 70s, bird’s eye view pieces such as You Yangs Landscape I, Water Pond in a Landscape II, Hillside II, and the Werribee Gorge Series, are revisited and reimagined through a fine, critical and digital eye that is Hulia Boz.

Boz’s next mission is to find new landscapes and says she is keen to continue to capture the world through her lens.

“Google Earth is my number one tool. I’m currently mapping out my dream list. Australia was a great place to start, because of its colours and lines. The world is a beautiful place and I want to see more of it from above,” says Boz.

And, as do we. For those with the means, there’s only ten of each piece available worldwide. If you’re in New York City, check out Postcard from Australia which is currently exhibiting at The Monash Room at the Australian Consulate-General in New York City 150 East 42nd Street, Floor 34, New York until 10th September 2018.