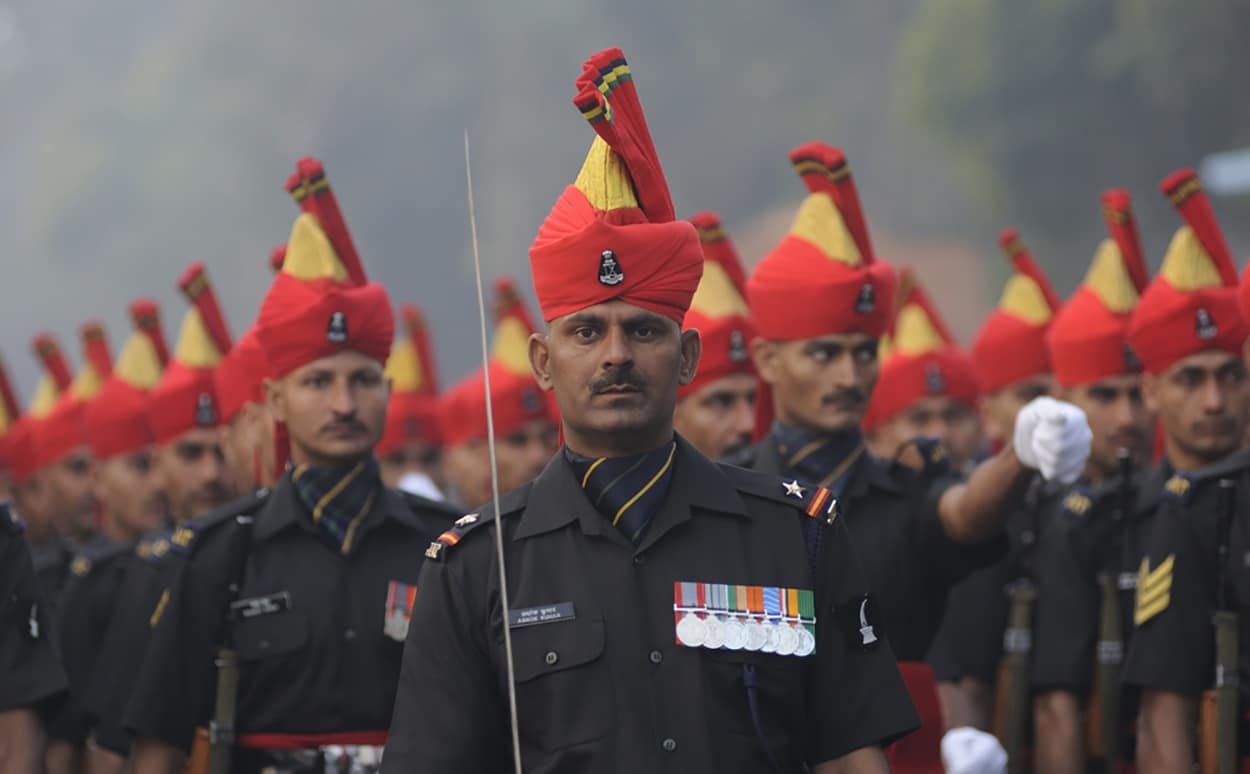 The buzz surrounding the Indian market has created unprecedented noise as over a thousand foreign companies from more than 35 countries are vying to capture contracts in the Indian Defence space.

Indian armed forces have sought an allocation of USD 418.16 billion from the Government over the next five years to ensure that forces are adequately modernised. A recent media report quoting sources in the defence ministry says that the proposal was put before the Unified Commanders’ Conference during a meeting held to decide the 13th consolidated five-year plan for 2017-2022.

With the looming threats from its two neighbours’ China and Pakistan and the gaps in India’s defence infrastructure has precipitated the five-year plan proposal. The global defense industry, however, is not complaining as there lies a huge opportunity for them to chip-in and laugh their way to banks.

The total budget outlay for 2017-18 (Apr-Mar) is USD42.68 billion which works out to just 1.56 percent of the projected gross domestic product (GDP) and is lowest in terms of Defence allocation since the 1962 war with China. The armed forces want the budget to reach at least 2 percent of the GDP, the report says. It is interesting to note that most of what is being allocated is used to meet out routine expenses and not for force modernisation. For instance, in the 2017-18 defence budget, over USD 26.91 billion revenue outlay outstrips the capital one of USD 13.47 (for new weapon systems and modernization) by huge margin.

All three armed forces – army, navy and air force continue to grapple with critical operational gaps as there has been a noticeable trend of declining modernisation budgets over the years. To make matters worse, there has been a spate of unspent funds and skewed revenue to capital expenditure ratio.

The buzz about the Indian market has created unprecedented noise as over a thousand foreign companies from more than 35 countries are vying to capture the Indian Defence space.

The government’s push for indigenous equipment is encouraging as many top corporate houses in the country have thrown their hats in and are collaborating with their foreign peers to set manufacturing units in India.

The government has pushed for reforms in the defense sector which has turned out to be a game changer for the Indian defense industry in the last three years. The compound annual growth rate for the sector in the last three years has gone up to 34 percent, bettering even the growth witnessed by the National Stock Exchange at 9.4 percent, during the same period, another report says.

A robust order book has ensured that the financials of the companies got strengthened, thereby having an incremental effect on market capitalization of these companies.

According to government estimates, 70 percent of country’s Defence equipment requirements are met through imports. That has been primarily due to lack of structural support required from the government in its role as a market-maker.

That is to change in due course with the government’s increasing focus to bring private players not only from India but from outside too.

Under the flagship program – Make In India, the government has decided to start Defence clusters to manufacture Defence related products and already there are talks that five such clusters are coming-up in various districts of the state of Maharashtra.  Each cluster will be hosting a group of industries with 70 percent government stake in each unit, and will be manufacture high-end products.

The government is also considering manufacturing ‘can’t do without’ components locally, 60 percent of which are imported, in small and medium enterprises in the country.  These ‘can’t do without’ components among others are engine part of T-90 tanks, bore of Bofors guns and magazines of AK-47 assault rifles.  The armed forces have often faced shortages in ammunition and spares, affecting their capabilities adversely.

The procurement cost of these components goes up to USD 1.55 billion, annually. The move will also reduce procurement turn-around time.

In the Defence Procurement Procedure 2016 policy which replaced the 2013 policy, the government has introduced a new category for equipment ‘Buy (Indian – IDDM),’ whereby a product will be required to have at least 40 percent indigenous content if it is designed in India or at least 60 percent indigenous content if the design is not indigenous, to provide a greater impetus to local players.  IDDM is Indigenously Designed, Developed and Manufactured product.

The new policy also gives freedom to foreign original equipment manufacturers to choose an Indian Offset Partner (IOP) of his choice over the course of the contract. It also gives an option to change the Indian partner, if required, bringing in more competition and efficiency.

Some media reports suggest that the government is planning to attract 5.45 billion USD investments through the foreign direct investment route through a more liberal FDI policy. The investments will not only create opportunities for Indian companies to invest in high-end technologies but will also help them to know and implement international best practices. In return, the foreign companies will be able to have a sizeable pie of the Defence contracts, considering huge gaps in all areas.

Partnerships Under make in India

France’s Dassault Aviation and Reliance Defence have teamed up in a 49:51 stake joint venture, to carry out the obligations and execute the rupees 4.67 billion USD offset program related to the sale of 36 Rafale fighter jets.

The aerospace facility, located in the state of Maharashtra is the largest foreign direct investment in the country, to date. Dassault is likely to bring first tranche of FDI amounting to 31.2 million USD. Reliance Defence which is the major partner will invest 1.01billion USD.

US-based Lockheed Martin has tied-up with Tata Advanced Systems to cater to the requirements of single-engine fighter jets by India. The Boeing Company is likely to sell F-18 aircrafts, the modalities of which are being worked out.

There have also been reports that the government is contemplating at starting a light combat jet production line, in line with India’s very own ‘Tejas’, under the Make in India framework.

The Navy is also likely to issue an expression of interest for procuring 110 light utility helicopters to be manufactured by an Indian firm in collaboration with a foreign firm. A number of Indian firms including Mahindra & Mahindra, L&T and Bharat Forge are likely to take part in the tender for which the foreign partner would be searched for, separately by the force.

According to government versions, 96 contracts worth over USD 13.35 billion have been signed with Indian vendors for procurement of Defence equipment for the armed forces in the last three financial years between  2014-15 and 2016-17 while 58 contracts worth USD 18.94 billion have been signed with foreign vendors for acquisition of Defence equipment in the same period.

What is being touted as mother of all underwater defence deals, India has kick-started a program called Project-75 to build six advanced stealth submarines for an estimated 10.91 billion USD and is partnering with France, Germany, Russia, Sweden, Spain and Japan to execute it. The programme is already delayed by 10 years.

According to one media report, the navy is also looking at issuing a fresh tender for acquiring 123 Naval Multirole Helicopters through the Make in India route. There is a palpable excitement over it which could arguably be one of the biggest deals to have happened for India.

Army and Air Force have also placed similar requirements for utility helicopters for replacing their aging fleet of Cheetah and Chetak copters. Russian-made Kamov-226T helicopter has been chosen to be built in a joint venture between Russia and Indian Hindustan Aeronautics Limited for supplying 200 copters.

Washington has offered to sell India 22 Predator Sea Guardian surveillance drones worth over USD 2 billion according to a joint statement released after Modi-Trump summit, during former’s visit to the US. India is also likely to get a C-17 Globemaster-III strategic airlifter for USD 366 million.

India is still relying majorly on AK-47 assault rifles which are central to their border and counter-terrorism operations. A great opportunity lies in the area of heavy weaponry as India, unlike US and NATO countries, does not use heavy weaponry.

previousFree Workplace Counselling is a Profitable Duty of Care