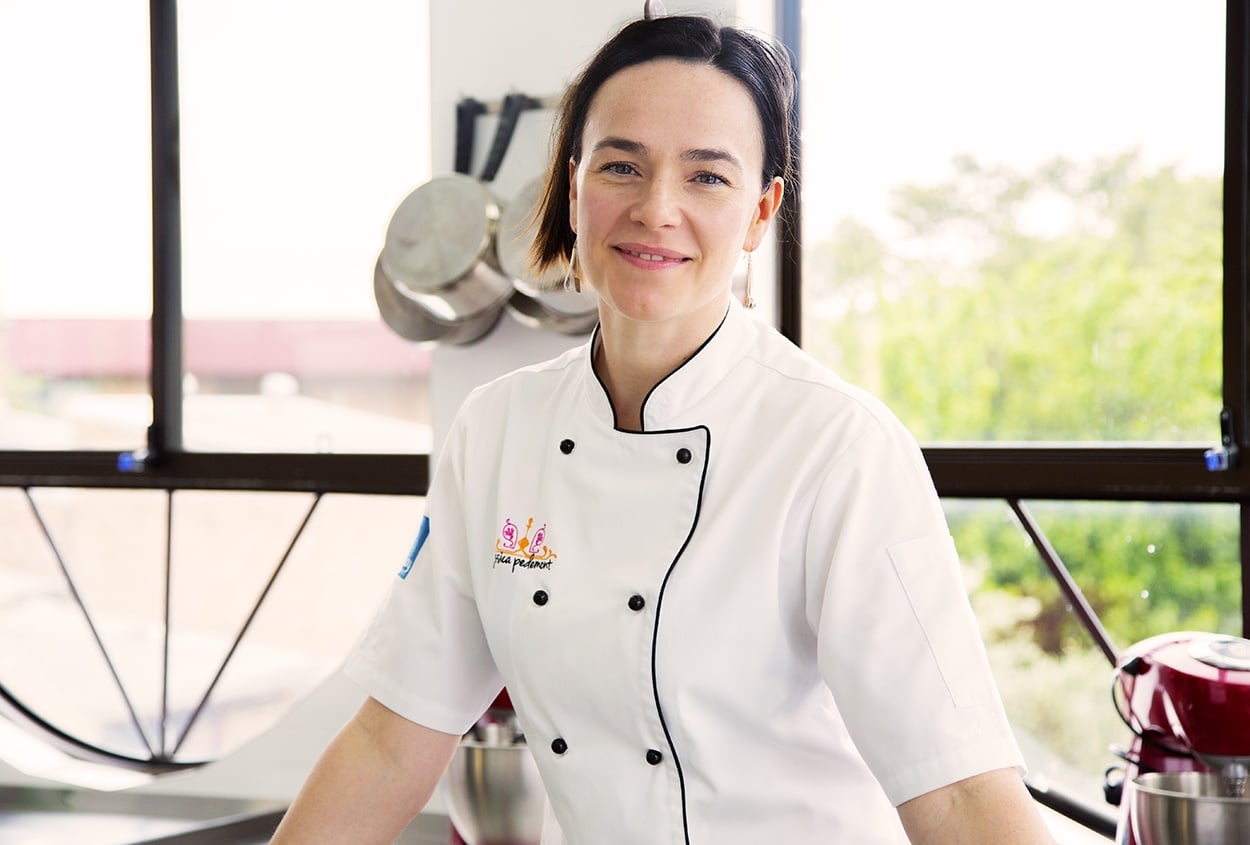 If there ever was a title for the kind of person who has a natural aptitude for life and unapologetically owns it – Sydney-based Chef and Chocolatier Jessica Pedemont would be a serious heavy-weight contender. We chat with an extraordinary Australian who has a flair for fine dining and fisticuffs…

If you were a child of the eighties growing up in Australia, you may remember that the most exotic chocolate you’d purchase at the corner shop was possibly Fry’s Turkish Delight.  Fast forward three decades on, and we are spoilt for choice in the chocolate to consumer chase.

With artisanal chocolate-makers scoping the globe’s remote tropics searching for new varieties of cacao bean, and industry’s discerning dissections of the cocoa’s ‘notes’ and ‘terroir’ influence, it may be fair to argue that the simple milk powder, cocoa and sugary sweet-treat mix has grown up and become gentrified.

Artisanal chocolate is now being paired with fine wines and whiskeys, and the origin of the cacao bean is just as critical – and as marketable – as the coffee bean.

According to IBISWorld, Australian chocolate and confectionery manufacturing is currently worth AUD7 billion a year.  With industry revenue expected to grow at an annualised 3.5 percent over the five years, thanks to a significant drop in sugar prices and changing consumer trends towards ethical and sustainable business practices and greater demand for product diversification, this has led to an explosion of boutique bean-to-bar chocolate makers and an opportunity for those who manipulate it – chocolate artisans.

“If you love Cadbury’s milk chocolate that’s your flavour profile, and it’s fine. Historically, our country had a small chocolate culture but it’s changing.  In 2003, when we competed in the Coupe du Monde de La Patisserie in France, we needed to source roasted nibs and could not buy it direct. We had to get it specially shipped in, but now, you can buy it at your local IGA. Like, wow!” says Pedemont.

For those who don’t know what roasted nibs mean – this is the result after the beans have been fermented, dried then roasted, the shell is then cracked and removed by a winnower, which leaves the cacao nibs. These nibs are then poured into a melangeur which grinds them into a paste of beans and cacao butter.  This paste is then conched to create a smooth texture and then the chocolate is tempered, which involves cooling and heating it to create a polished, refined finish.

“We have come a long way. I like to do bean-to-bar, but to get a regular source of quality beans that have been harvested ethically and shipped and stored properly into Australia, it can be difficult with our strict import laws,” says Pedemont.

The bean-to-bar movement, which is part of the slow-food movement, started in the US in the nineties, and has since gained traction in Australia, with a few stand-out crowd pleasers including WA’s Margaret River based chocolate-maker Bahen & Co, Daintree Estates – which also happens to grow Australia’s first cacao plants in the Daintree Forest in far north Qld, Zokoko in Emu Heights NSW and Australia’s first bean-to-bar maker since the 1930s, Haigh Chocolates in Adelaide, SA.

According to Pedemont, when it comes to consumer choice, people love being taken on a journey – so the popularity of giving a back-story to a product, particularly with cause-related marketing, has a big appeal for consumers who want to feel like their dollar is also attached to a higher purpose.  Indeed, the single most common trait boutique chocolate makers differentiate themselves from the likes of Hershey’s, Cadburys, Mars and the now defunct Darrell Lea, is sustainable and ethically sourced ingredients. With company descriptors boasting reassurances of fair trade, reputable farmers, anti-slavery, organic farming, hand-made over pre-mix…the act of purchasing food has become a conscience-weighted decision – and arguably, rightly so.

“We are living in a world of premix – just add water and you can make a cake. I understand that there is a place for this in the market, but there’s a real loss if you’re not making the cake yourself at home for the same amount of time… why not use the eggs from your couple of chooks in the backyard for a better all-round experience? I’ve caught, killed and cooked a chook, and made bone broth, pate out of the gizzards, made crackling out of the skin… I know we can’t always go catch the fish of the day, but we can do small changes that reduces waste and teaches respect for produce and the producers. Pre-mix and pre-packaged meat separates the reality of the origin of the food so it’s easier to be wasteful… there’s some who won’t pay for quality produce, but will buy the latest iPhone. It’s about what people value. Trying to care about where your food comes from is an education,” says Pedemont.

As an Australian with Italian heritage, Pedemont credits her first memories of respect for food started with gardening and cooking with her great grandmother as a child.

“Growing up, I spent a lot of time with my Nonna in her backyard, we pick the tomatoes for her ragu, she would grind four meats, and make gnocchi from scratch and go to the market and she would inspect every bean before putting it in the bag… I learnt to give food the time it needed from her. She was very influential for me.  Commercial cooking has its place, but the time you take to grow the ingredients and prepare and cook the food… you know, there’s a place too to take the time to do things well – it turns the whole necessity of eating into a wholesome experience. It was a sweet time in my childhood,” recalls Pedemont.

After 20 years’ in the culinary arts, the experience of learning how to cook with her grandmother as a child, continued to influence Pedemont’s career path, with her decision to give back to the industry by becoming a TAFE Ambassador specialising in patisserie since 2011.

“People know me for chocolate, but I do many things. At the moment I work with truffles. I love making pasta, cakes and involving myself with my partner’s business. I’m working on a cross promotion with Alto Olive Oil now… Look, I prefer to make strawberry jam but can happily debone a quail!” laughs Pedemont.

With an auspicious start early in her career, Pedemont won the prestigious Oliver C Shaul Scholarship in 2001, travelling to Chicago to work in world-class Charlie Trotter’s five-star kitchen and studied at the famous French Pastry School. Closer to home, Pedemont was selected to work with the Rockpool Restaurant Group prior to graduating from East Sydney Technical College with a Certificate III in Commercial Cookery and Certificate IV in Pastry. She has worked under Stefano Manfredi at his two-hat restaurant Bel Mondo in Sydney (and owner of the much-celebrated Bells Restaurant in Central Coast NSW) to being appointed as executive pastry chef at Victoire Boulangerie in Rozelle NSW. In 2008, Pedemont opened Chocolate Artisan and soon after, Celebration Cooking, based at her studio in Hurlstone Park NSW. These days, Pedemont sees herself as a mentor to the next generation of would-be chefs.

“Teaching is a huge responsibility and commitment from both student and teacher. It’s interesting how sharing food opens up a space to open up about your life. In the classroom this happens a lot. It doesn’t just become about the food; students feel comfortable talking about their life. There’s something remarkable about the way food brings out the best in us,” says Pedemont.

As the Australian Ambassador for hundred-year old, privately-owned Swiss Felchlin Chocolate since 2010, Pedemont’s culinary achievements are not the only bows in her quiver. A national gymnastics champion till the age of 14, Pedemont took up kick-boxing at 15 and went on to win multiple international and national awards in mixed martial arts, including being on the Australian free-style wrestling team. These days, it’s Olympic power lifting with her partner, Tommy.

Interestingly, while creating sweet foods and heavy sports training aren’t a natural pairing, Pedemont insists that there’s a connection between the two pursuits.

“Like cooking, martial arts is a discipline. There’s respect, uniform, time, due diligence, creativity. I never saw the correlation between the two activities until I was ten years into my career. There’s this adage, ‘beware of the person who knows one punch really well’.  This applies to working in fine dining restaurants too. Every plate must be presented perfectly – every time. That takes a lot of practice!” says Pedemont.

As an SMB, Pedemont’s commitment to excellence in the kitchen or on the mat is born from thousands of hours of effort – but you won’t hear her whinge about it, cause that’s just the way she likes it.

“At the end of the day I’m an Artisan. I never count my hours. I just keep learning, and try to continually add value to what I create. Taking time to explore, experiment, testing and refining is all part of the process, and we never get it right the first time. The one who wins is the one who keeps on doing it!” says Pedemont.

All images by Margaret Channing | Copyright 2016.