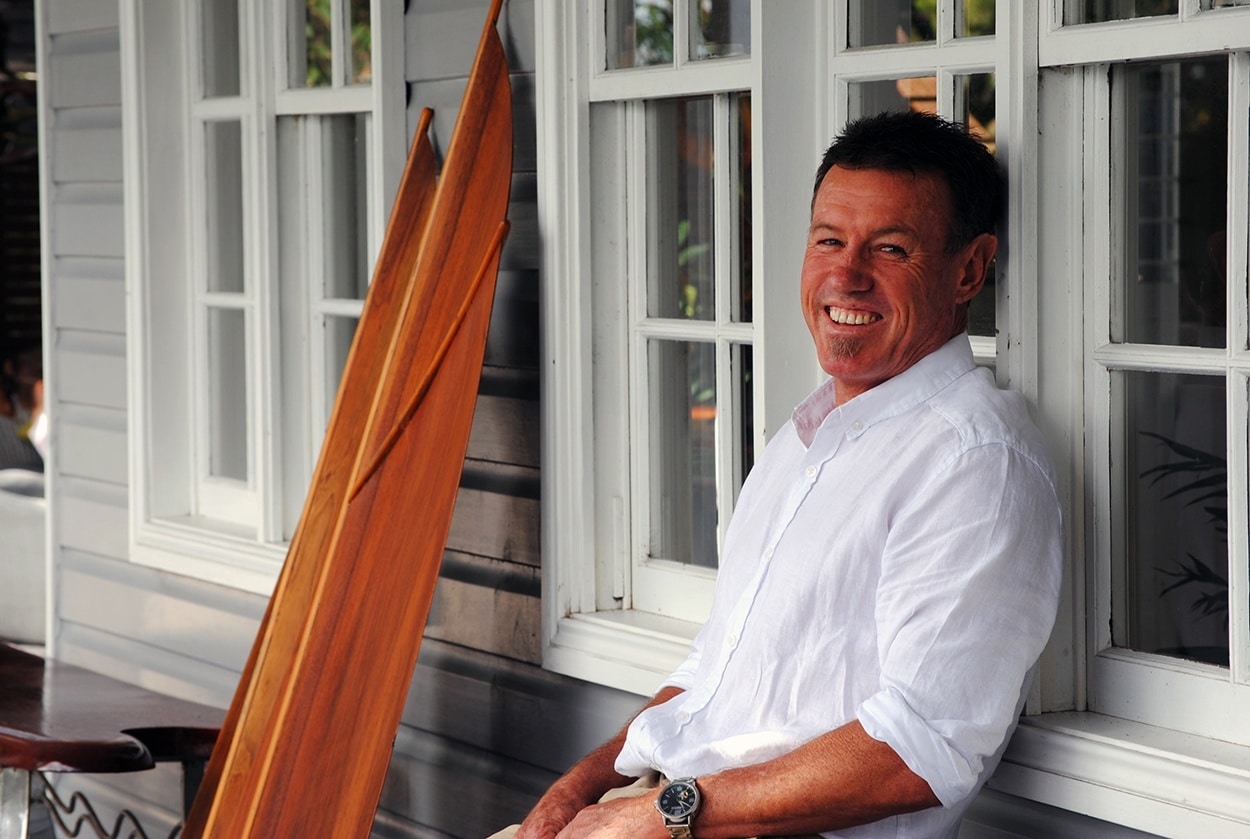 We spent a morning among the gum trees with multi-award winning Australian sculptor John Woulfe, whose ability to manipulate some of the most difficult mediums into fine art sculptures is literally, second-to-none in the world.

When you meet John Woulfe, 60, you can’t help but feel that this guy knows what it really means to live well. Softly spoken, yet quick to smile, Woulfe is most comfortable talking about what he does best; creating bespoke, marine and bush-themed sculptures inspired by a lifetime of living on Australia’s eastern seaboard.

Growing up in Hornsby, Woulfe moved to the Central Coast when he was a teenager and says his environment informs his style.

“In terms of the materials I use, it’s all about where I’ve come from.  I was a boat builder for many years and I’ve always felt at peace in the sea, by the water, near the bush,” says Woulfe.

Interestingly, Woulfe didn’t have much to do with marine life in his childhood. It was only through a meeting with his school counsellor, who suggested he might do well working with boats.

“I didn’t realise I kept rattling off about boats and water. The counsellor said I should be a shipwright, and I said, ‘what the hell is that?’ So I went down to the Hawkesbury and was able to secure an apprenticeship,” says Woulfe.

After recovering from meningitis in his forties, Woulfe decided to give up a successful career as a shipwright to follow in the footsteps of his late mother, whom was a local artist. Interestingly, Woulfe’s son, Liam, followed his father’s footsteps and is now a shipwright, and was a professional sailor with yacht racing teams Scallywag and Ragamuffin. Woulfe says Liam has no desire to become an artist.

“I wanted to be a sculptor. Life’s short, and I’ve never looked back. Mum was a painter. She worked with watercolours, oils. She loved landscapes and would often get up early to paint water scenes. We went to art shows together when I was young. I feel ripped off because I thought she would be around forever.  When I paint, I use her old palette knife, sort of sculpting with oil. When I was five, the first picture I painted was of a boat.  Mum kept it in the family bible for many years,” says Woulfe.

Best known for his signature boat sculptures, with demand coming from private collectors, corporates and boat enthusiasts from the US, UK, Europe and South East Asia – his work can fetch anywhere between AUD2,000 to 50,000. His work has developed a cult-like following, particularly with the yacht-crowd set and for good reason.

Working exclusively with iconic Australian materials, including red cedar, Huon Pine and Jarrah timbers, stainless steel and locally-sourced sandstone, Woulfe is one of those rare sculptors that is hands on from conception through to the last polishing touch.

“There’s a massive amount of hidden engineering in every piece. Every join is painstakingly hidden. Some people are amazed by the timber, and it makes sense to them because I used to be a ship builder, but then I’m often asked about who is my stainless-steel guy and who did the sandstone? I’m like, it’s all me. Most sculptors outsource components of their work, so I think my clients appreciate that every component of my sculptures is created by me,” says Woulfe.

With major stainless steel manufacturers investing in Woulfe’s work because of the finish, texture and shape Woulfe is able to achieve with what is essentially, a very difficult medium, Woulfe says that the reason he is able to achieve a fine-silver effect with the steel is simply a combination of physicality, hours and tool modification.

“My clients buy my work because no one is mad enough to do what I do. I’ve exhausted steel suppliers as no one has the heads to sustain the level of polishing required. So I’ve had to adapt and re-invent my own tools to achieve the kind of finish that I’m satisfied with… I’ve destroyed a lot of steel sheets over the years developing my technique, in fact there’s a graveyard of fails underneath my deck… I’ve literally spent thousands of hours trying new techniques to make my work more detailed. I have lots of sayings written on scrap paper around my workshop, one of them is, ‘try to improve on your last improvement’. I think, as an artist, it is important to keep pushing personal boundaries,” says Woulfe.

Sourcing his timber from a miller in Port Macquarie NSW, Woulfe will visit his supplier a few times a year with the intention of finding timber fit for purpose. While most buyers prefer straight grain, Woulfe looks for twists and turns and points of interest in the timber, as well as sandstone.

“I like twists and turns. Sometimes the stumps produce incredible form. I love working with Australian red cedar. The grain pattern and deep reds are magnificent…. I source my sandstone from Gosford quarries. I tend to be drawn to colour contrast, pattern and density. I can normally tell by looking at a piece whether it can be carved or not… just recently, I completed a commission for the Royal Prince Alfred Yacht Club in Sydney, where the sandstone was 2.1 m long, 1.2 m wide and 300ml thick, and I had to have it craned onto my driveway. To carve it was an adventure itself,” says Woulfe.

His boat sculptures’ strategically carved lines and fine engineering creates pieces that feel and look both supple, reflective and fluid – which is an extraordinary achievement given the effect is created by hundreds of hours of manipulating unmalleable materials.  For Woulfe however, the visual impact informs only one part of his motivation for self-expression – it’s the constant pursuit to replicate a memory and the emotions that go with it that keeps him dedicated to his art.

“When I’m out on the harbour, sailing, and I see a traditional boat, it is so elegant, so beautiful to me, it inspires me to jump back into the workshop to capture not only that image in my mind, but also to recreate the moment, the feeling for me. When I finish a piece, I celebrate on the deck with a beer,” says Woulfe.

With each piece usually taking months to complete, Woulfe chips away at his pieces seven days a week, with the odd Sunday off to work on his other passion, 2,000 sqm of gardens on his waterfront property.  Woulfe’s wife and publicist, Chris, will often co-ordinate clients to visit their property as part of the procurement process, to understand the level of detail and workmanship that goes into creating each piece.

“I think inviting clients to see how the work is put together, to meet the artist and break bread with them gives clients a whole level of appreciation to understand the sweat and artistry that goes into a piece… My Mum and I used to go to the Archibald Prize every year. We’d both walk around, and we would always guess the right winner and choose the same piece. It’s important for artists to give people what they want… Art is a conversation. I like to draw people in with the visual impact of my work, and then on closer inspection, the quality of the work invites the viewer to actually study the details of the piece, which are quite intricate. I love it when my clients are blown away by the detail. That’s why I do what I do,” says Woulfe.