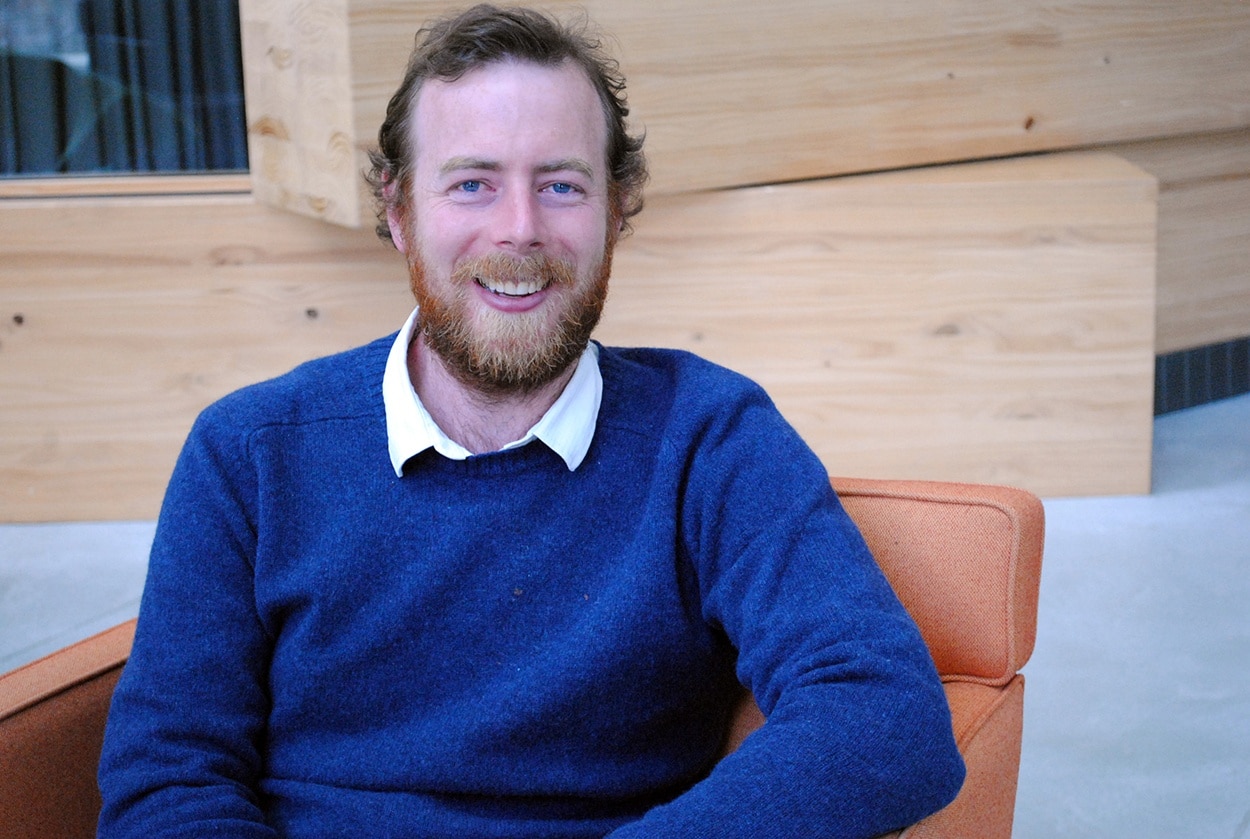 After launching the first community-owned solar farm company in Canberra, ACT in 2015, Founder of SolarShare Lawrence McIntosh says residents have more political power to demand for a push for renewables than they think – and getting involved through community-minded eco-friendly societies is a great place to start.

Since Chancellor Angela Merkel declared that Germany would close all its reactors by 2022, after the Fukushima nuclear power plant meltdown in 2011, Germany is progressively making good on its promised Energiewende – an energy revolution – whereby the country plans to generate most of its energy through renewable sources (wind, solar hydro). Legislative support for the Energiewende was passed in late 2010 which includes a renewable energy target of 60 percent by 2050. As of 2017, renewables surpassed over 41 percent of Germany’s power supply. Wow.

With the Trump administration switching gears to ramp up coal-powered energy generation, most of the developed world is now looking to Germany’s leadership in the renewables space for answers.  One of the hall-marks of Germany’s remarkably swift transitioning to clean energy can largely be credited to the will to renewable power by grass-roots, citizens’ associations. If we consider renewable energy infrastructure (think of the modular nature of solar panels for example) by the nature of its singular modality, mass-adoption of renewable energy may herald the eventual decentralisation of what has been traditionally, a very monopolised energy market.

Resistance, and caution by politicians and energy incumbents to renewable energy over the past two decades should come as no surprise.

Nonetheless, with community-owned wind and solar farms popping up around the globe, citizens can now play a direct role and profit from, energy production.

According to Founder of SolarShare Lawrence McIntosh, based in Canberra, Australia, feeling a sense of ownership over the physical asset is a major incentive to getting citizens on board the clean energy train.

“I feel like what is happening in the renewables space is going well. There’s plenty of room for people to point fingers at the Federal Government or Industry Regulators to be more aggressive, but its more complicated than that and for good reason. I understand why regulation and change is a slow process because it must be risk adverse. What I do like about the Australian market, as contrast to the US, for example, is that there are all these companies in the US that are leasing solar panels to consumers rather than the end-user owning the asset and I don’t think that should be the dominant business model in solar.  However, in Australia, the customer who opts for solar panels, will own the physical asset. I think this distinction plays a role in helping people feel like they are a part of something bigger than themselves, which encourages greater participation and buy-in for renewables,” says McIntosh.

In Australia, the Federal Government is responsible for environmental policy nationwide, whereas energy policy remains in the purview of the States’ and Territories.  Understandably, a natural tension arises between these two areas of legislation between Federal and State.

While the outcomes of such a stunt remain to be seen, the Federal Government made three announcements soon after the public dressing down by Weatherill towards Frydenberg:

One, Prime Minister Malcolm Turnbull announced that the Federal Government would build a low-emission coal-fired power station in SA, arguing that new, coal-fired power stations being built around the world have much lower emissions than older power stations due to technological advancement; two, the Federal Government would guarantee security of gas supply by ensuring gas producers sell first to the domestic market; and three, a promised AUD2 billion expansion of the Snowy Hydro electricity scheme – all of which received a lukewarm reception.

McIntosh’s view on this matter is somewhat pragmatic.

“My comment for both is simply, that something in the market has failed to guarantee uninterrupted supply. People are saying blackouts are unacceptable, which is reasonable, and both State and Federal are taking responsibility for guaranteeing supply. The national energy objective is two-fold; meeting consumer price expectation and security… there needs to be better market mechanisms that signal the value of security and, with a sufficient lead time expectation that people can build generation assets knowing that three years in advance that their services for providing security, the ability to react to unforeseen events, is going to be recompensed. So, something in the market has failed to provide these signals, in time for generation assets to be built,” says McIntosh.

While some may argue that philosophical positions dictate too heavily in energy policy, according to McIntosh, the push for renewables in the solar space is largely due to economies of scale – or in US Political Strategist James Carville’s words, “it’s the economy, stupid”.

“The reason why solar is ‘so now’ is, if we use Malcolm Gladwell’s turn of phrase, ‘The tipping point’, we’re on that classic new tech adoption curve.  Germany’s push to renewables created incentives, which ramped up global manufacturing in the solar space.  Since 2007, There’s been a ten-fold decrease in the price of solar power world-wide, which is mostly due to global demand following Germany’s leadership, which created an economy of scale… This coupled with tech improvements and better efficiencies, we are starting to experience that scale in Australia, where it now makes financial sense to put panels on the roof…” says McIntosh.

Starting SolarShare, Australia’s largest community-owned solar farm in Canberra, McIntosh, 31, is well-placed to discuss market demand. After extensive community consultation when the project first kicked off in 2015, McIntosh says that the process has seen strong community support and interest in the scheme, of which he feels proud to be a part of.

“SolarShare started within a local civic society, called SEE-Change in Canberra, where we would get together to discuss social, economic and environmental issues in our area. At the time, SEE-Change was doing a project on carbon footprint in the community, and the idea to do a solar community farm project under its auspice made sense. We’d all read about Hepburn Springs, in Daylesford Vic, where the community built Australia’s first community-owned wind farm, and we were like, why not Canberra?” says McIntosh.

After spending a day with an energy lobby group at Parliament House, McIntosh says he had a lightbulb moment, chatting with their local MP about their plans for SolarShare.

“At the outset, SolarShare was something which a group of us felt that we could do, that we felt was important to do, so we met our local Member, and there were a few of us that had different views, but our MP was very supportive…He said that the Government can’t go further than what the electorate has acceptance for. If there’s strong support in the electorate, then politically we don’t have an excuse. We have to do what the people want…So we went to the community to find out what our electorate wanted, and it turned out that support was strong for the SolarShare model,” says McIntosh.

After securing an early stage grant, to explore the feasibility of the project, SolarShare settled on a 3.5-hectare site to produce a one megawatt solar farm in the Majura Valley.

Upon project completion, SolarShare is projected to produce around 1.9 gigawatt hours of renewable solar energy per annum, with its 5,500 solar panels preventing approximately 1,600 tonnes of Co2 emissions, equivalent to taking 330 cars off the road and powering up to 250 homes.

According to McIntosh, any local resident can register with SolarShare with a minimum AUD500 investment.

“We want retirees, students, young professionals and families to get involved. From the very beginning, we sought site approval from the residents. In terms of ROI, the community has indicated that its expectation should be the equivalent to what an investor would earn if their money is in a high interest savings account – at that time it was around 5-6 percent mark… our next milestone is to complete the ACT Community Solar Scheme (CSS), which is part of a broader program to encourage renewable energy initiatives to achieve a total target of 550 megawatts for the ACT. This broader legislation was in large part due to precedents set by community solar farms in SA and Victoria. The ACT is aiming to take a leadership role in Australia, with the view to be independently energy sufficient – particularly when Federal Government policy in this regard is uncertain at best… Once we complete the requirements of the CSS – this locks in a contract that helps us sell the energy,” says McIntosh.

Aside from McIntosh’s ‘labour of love’ that is SolarShare, when he’s not spending his days in Canberra, McIntosh can be found at the University of Technology Sydney, as a Research Consultant with the Institute for Sustainable Futures – which focusses on the challenges of integrating renewables into the grid.

An Engineering and Commerce Major from ANU, McIntosh is well positioned to merge solid commercial acumen with sustainable energy systems. He is also a partner at start-up PV Lab Australia, a solar module testing laboratory

“At PV Lab, when people buy solar panels, they want a better understanding of the quality of product, so we have equipment that makes sure the panel does what it says it can do on the label and if the consumer is buying what they’re paying for. This service is very much a maturing marketing in Australia, it’s far more developed in Europe,” says McIntosh.

For those who find McIntosh’s community-minded journey an inspiration, McIntosh urges fellow energy-enthusiasts to get engaged, join a group, and ask, ‘why not’?

“There’s a lot of activity in the solar farm space in Australia at the moment. There’s a commercial project happening in Darling Downs, Qld, and the Royalla Farm and the Moree Farm in NSW are now operational. In Goulburn there is a community solar farm currently under development. For those who are keen, visit these farms and check out the next Community Energy Congress planned for Australia in 2019. Anyone can get involved, if they want to,” says McIntosh.