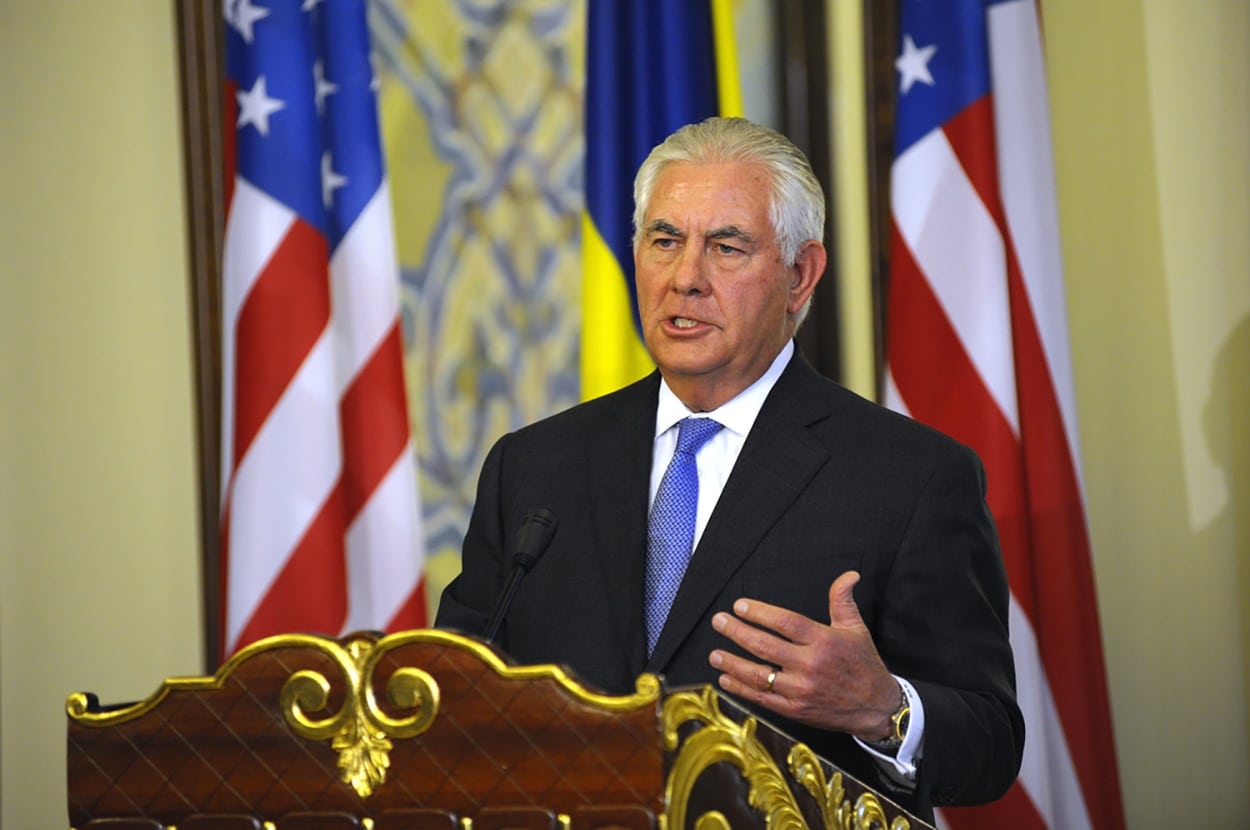 With the quiet admonition by former US Secretary of State Rex Tillerson urging colleagues on Capitol Hill to seek ‘kindness’ in a ‘very mean-spirited town’ last week, we are reminded that practising leadership and kindness is not a dichotomy.

It is lonely at the top. When the weight of responsibility weighs heavily on those leading a team that is comprised of close colleagues, a leader may feel conflicted during times of decision. In times of duress, it’s important to remember how we achieve our goal is just as central to attaining the goal and, how we hold people to account rather than just holding them to account is the hallmark of leading with kindness.

When former Secretary of State, Rex Tillerson gave his final remarks as the US Chief Diplomat, his emphasis on upholding values of respect, dignity, and inviting colleagues to perform ‘one act of kindness a day’ resonated strongly among all – regardless of political persuasion.

Sadly, kindness is a word rarely seen in action on the Hill, but that is our intention with the World Kindness USA campaign; to influence those with influence.

There are many styles of leadership which are suited to different objectives. The question I ask today is, can kindness co-exist in all leadership scenarios and does it compromise or strengthen your position as a leader? Being the teacher in a school, to a leader of armed forces engaged in combat or a political party fighting during an election or a leadership spill, how does kindness come into play with discipline and setting the tone to deliver a desired outcome?

The tough seasoned campaign weary Sergeant in the trenches with raw recruits facing almost certain death, if asked by a soldier, “Are you afraid?”, what would the kinder response be? Would his response be different to a school teacher hiding with a group of students in a school under siege? Leaders who have the courage to be kind by sharing personal vulnerability to connect and comfort someone through a crisis is powerful because courage tempered with kindness are both selfless.

Maintaining power and control through fear, however, in a democratic society, is a short-term strategy as people will revolt either in the ballet box or on the streets. What experience has taught us is that leadership is temporary, but, the legacy left stands as testament to how well a leader served those around them.

The existing culture of an organisation has a lot to do with this, however who determines the culture? Do leaders have to be ‘cruel to be kind’ in a ‘dog eat dog world’ or has the age of the alphas come to pass, where the quiet collaborator is the one who now stands tallest?  In a wolf pack the Alpha leads from the back, while the oldest and weakest are at the front to determine the pace. In a competitive culture, this is rarely seen and creating a community on this principal in the corporate world seems out of place as employees are driven to succeed by seeking recognition for individual achievement, or, rising to the top by putting others down.

Leaders can be elected by a popular vote, ascend by decree, overthrow the incumbent or can be recruited or promoted based on skill, timing and/or career achievement. No doubt all have their own take on the dangers of being ‘too kind’ in a competitive environment… During my time in the kindness space it has not always been smooth sailing to say the least, as all executive positions on the International Council are through an election process, however I chose to take the high road and play the ball rather than the person, empathising with my colleague’s position, background and behaviour rather than take offence.

I have long argued to dispense with an election process which is competitive, opting to draw names from a hat to ensure politics can’t creep in to corrupt an otherwise healthy culture, with conflict and self-interest. I am pleased to say this has been a rare occurrence and measures are now in place with the adoption of a Kindness Clause in our constitution which provides some protection from this happening.

Collaboration is essential and while one person may have support from a majority, a silent minority could unintentionally sabotage the project with their refusal to participate by being openly critical or quietly planting seeds of doubt behind closed doors rather than discuss concerns directly. It does not matter what’s in the handbook, people will be human and react emotionally and exhibit behaviours which may be inappropriate or undesirable, however those behaviours got them to where they are so it served them well and they don’t want to change.

To emphasis this point, during industry conferences, by the third-day, everyone has made connections and feel settled in. I have often asked the audience, “Do you want to change the world?” They give a resounding, “Yes!” Some time passes and I then ask them to change their seat and sit with someone they do not know or have not engaged with. Guess what happens? It’s like pulling teeth, so I say they do not have to move if they don’t want to. Almost 100% return and take their original seat. I then ask, “By a show of hands, who said, ‘Yes, they want to change the world?’” Hands go up. I then question how can you change the world if you can’t even leave your comfort zone to change your seat? My point is if you’re not happy with the way things are, take charge. Leave your comfort zone by doing something different, speak up, as an angry icon on a Facebook post just won’t cut it. Change requires all of us to be engaged and the notion its someone else’s job is fallacious.

A leader is not always the boss

Leaders are continuously tested and can succumb to the frailties of human emotion; choosing to play the person rather than the ball – which will inevitably lead to politics, something we often see in the corporate sector.  It is a challenge to take the high road while dodging bullets without returning fire. However, leadership is not tested when times are good. The metal of leadership is tested under pressure to meet targets, or deal with conflict – inappropriate or disruptive behaviour from team members or superiors. I believe this is where kindness, when applied fairly, can serve an organisation best. You may need to speak up on behalf of another or provide your boss unsolicited council, however by doing so you would be doing a great service to ensure a sensitive situation did not escalate or you could find yourself in the cross hairs. Either way, it requires a certain amount of courage and it helps if the organisation clearly has kindness as a value.

Being able to communicate effectively is essential for a good leader, however where different languages, time zones and cultures come into play, misunderstandings are inevitable. It has long been acknowledged that people are the key to a project’s success, however, managing people on projects is often harder than it seems. This is largely due to the diversity of skill sets required, the use of matrix teams that draw together team members from across an organisation, and the growing popularity of outsourcing, off-shoring, and collaborative approaches. As a result, leaders often need to manage a team of people who:

Leaders must overcome these and other challenges to harness the strengths, experiences and skills of team members, to develop them into a cohesive, motivated, high-performing team. The challenges in leadership can become formidable when team members begin to lose hope, trust and question their commitment to support the enterprise, or worse, unconsciously conspire as fear starts to erode good judgement and common sense. Assigning blame never ends well when what we really need are solutions on time critical projects which are more likely to evolve through maintaining respectful relationships among colleagues.

Your intuition versus always seeing the best in people

I believe the two are not mutually exclusive and while your alarm bells may be ringing loudly telling you to run in the opposite direction, I manage to always find the good in people; I just sometimes have to dig a little deeper. When our intuition is screaming at us we need to ensure that boundaries, checks and balances are in place to ensure we mitigate the potential damage, yet remain in a position to be a positive influence.

Leading by example and being a transparent, supportive mentor can curb inappropriate behaviour, however your corporate psychopath can seek out other avenues to achieve their goals by side stepping protocols or in fact “crying wolf” suggesting to you or others are ‘suffocating them’, when this is clearly not the case. The lessons I have learned is that this needs to be a team effort and a leader should not try to compartmentalise issues thinking this is a small issue as eventually it will gain critical mass and you will have collateral damage. This is when a leader needs to reassure their team and also ask for their assistance as many will just quietly remove themselves to avoid conflict. Leaders today need to find balance in ensuring they mitigate risk without being fearful. Mentoring has a huge role to play especially since many of our future leaders have now been raised in a toxic culture in a world that that has become all about self.

Strength means being able to speak up when others won’t but always speaking up with honesty tempered with compassion. An individual’s behaviour does not equate to the entirety of their character as it is subject to a circumstance which can bring out their best or worst.

Empathy is an important skill for leaders as it leads to greater insight, which leads to a deeper understanding… empathy is a natural segue to practise an act of kindness on someone whom most probably needed it the most – and whom better to follow than someone who leads by example?

previousWhere to Invest in Property Across Europe in 2018

nextTokenization of Payments to be Industry Standard in 2018