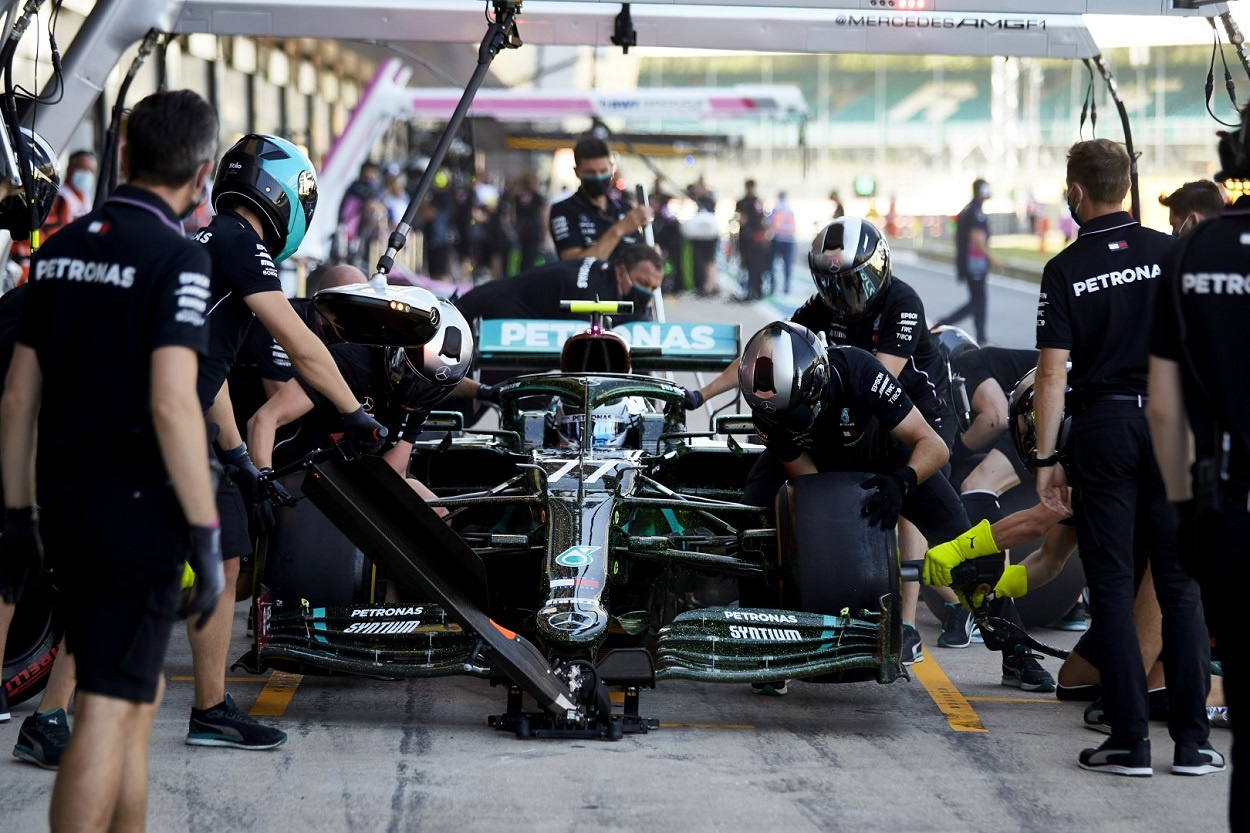 Mercedes AMG Petronas Motorsport Director of Commercial Engineering Geoffrey Willis says over the next five years, the Mercedes Formula One Team will continuously make data-driven decisions to inform car design, improve agility and adapt to race conditions. After an impressive performance in the 2020 season, Willis argues it’s a winning millisecond advantage strategy that delivers a champions finish in every race…

Milliseconds don’t sound like much but it adds up, and with thousands of adjustments that can be tailored and improved upon sometimes it adds up to a lot.

How much? Take Lewis Hamilton’s recent win at the Spanish GP, by the end of the race Hamilton had lapped the entire field up until his own team mate who was in third. This is the power of harnessing data and the 2020 Formula 1 season shows it’s never been more stark the difference between the top performers and the rest.

The 2020 season has been a three driver contest with two of those drivers in the same team, Lewis Hamilton and Valtteri Bottas standing 1 and 3 respectively in the drivers’ championship. Hamilton and Bottas’s are the drivers for Team Petronas powered by Mercedes which seem untouchable in the Constructors’ Championship. This is not to say that the drivers don’t make a big difference but as they often say Formula 1 is a team sport. Clearly from the results orchestrating large teams and micro adjustments chasing perfection of harmony, data and its insights executed are the difference between a great and grand performance.

To find out more, we asked Mercedes AMG Petronas Director of Commercial Engineering Geoffrey Willis how much of a factor does he consider the use of data to be in the overall team performance in the context of the driver and the car itself?

“In Formula One racing, the winning margin is measurable by milliseconds, and we know that the slightest gain can make the biggest difference in terms of competitive edge and winning the race. We believe that leveraging data keeps winners ahead of the pack. We work with terabytes of complex live and advanced analytics solutions to transform powerful data. This enables us to establish optimum theoretical configuration for our race cars and plan our race strategy. This applies to both enhancing the optimal condition of our race cars and also to giving our drivers laser precision insight on their winning strategy before and during the actual race,” says Willis.

According to Willis, the visualisation of the data is crucial, as opposed to just reading out the underlying data outputs.

“In order for data to drive our ultimate competitive advantage, we utilise sophisticated data visualisation solutions to provide our team with the visual data on our race car’s performance. This visual data helps distinguish relevant and crucial information in delivering our championship performances. With precise data visualisation, predictive analytics, and the use of AI in maintaining our race cars’ optimum condition, we are able to leverage our experiences and maximise the power of our data in delivering our winning objective out there on the race track,” says Willis.

According to Willis, data visualisation takes on an important role in the way Mercedes does its simulator analytics, or when it creates digital twins in Formula One racing to mimic the real track experience, maximising on-track testing time.

“The digital twin acts as a virtual software replica of the same functionality as the actual race car it is simulating, consistently producing better results and deeper insights for process optimisation,” says Willis.

Mercedes partnered with data analytics company TIBCO, using its Spotfire data models since 2017, which some may argue has helped to produce an impressive history of Formula 1 championships.

According to TIBCO, the Mercedes F1 Team turned to TIBCO to utilise data visualisation, predictive analytics, and AI to deliver their objectives in turning data into valuable insights for individual races, drivers, and constructors.

We asked Willis whether using the TIBCO Spotfire data models has significantly affected Mercedes performance going into each season?

“The Team has been utilizing TIBCO Spotfire since 2017. For each season, the data models allow us to use to better understand data in the build-up to and during the race weekend. We are able to review the models between each session on-track in order to aid setup decisions and to work through vast amounts of simulation data, which in turn provides us with setup recommendations,” says Willis.

We asked Willis whether the drivers get involved in the analysis and how they managed to integrate and encompass the human element (the driver) into how insights are used.

“The driver’s opinion is invaluable, in particular when you have such experienced drivers as Lewis and Valtteri. Therefore, we listen and engage with their feedback whilst also highlighting key points of data that the car’s sensors have retrieved. It remains an open and transparent conversation between a driver and their engineers, within which discussions regarding car setup are paramount,” says Willis.

In terms of the competition, Willis says Mercedes tracks the other teams’ stats as well.

External data (non car-based) such as weather and environment is also considered. We asked Willis to give some examples.

“It is of critical importance. The local weather forecast is monitored in live time across the weekend and we are able to view, in detail, how the weather may look later in the weekend. An example of this would be when deciding on a car setup for a race in changeable conditions. Once you roll out of the garage for qualifying on Saturday the car’s setup is “locked-in” under Parc Ferme conditions. With that in mind, if you have a wet qualifying and a dry race, or vice versa, you need to select a car setup that gives you the best opportunity for a successful race on Sunday, even if that compromises your Saturday qualifying performance,” says Willis.

Willis says that Mercedes analytics include all aspects of its race cars’ performance before, during, and after a race. With the continuous generation and analysis of both historical and live data, Willis claims their predictive analytics and AI solutions provide the visual data we need to improve and enhance our strategies for upcoming races.

We asked Willis whether there had been a time where there’s been a conflict between what the story the data is telling and the team or driver is saying?

According to Willis, this happens rarely in the current period of Formula One given the vast amounts of data available and the discussion being predominantly data-led.

While visualization of data is great, we asked Willis how directly does inform the team’s actions; is it directly involved in the decision making for the team both real time and over time?

“The Mercedes Formula One Team has become one of the most successful teams in recent Formula One history. We achieved consecutive Drivers’ and Constructors’ championships from 2014 to 2019, and our series of consecutive victories has been fueled by our capacity to transform our powerful data into valuable insights that further improve our individual races, drivers, and constructors. Data certainly supports our competitive advantage. By connecting the data to our intelligent analytics solutions, at the same time processing and visualizing data to continuously enhance our race cars’ performance and race strategies, we are able to make data-driven decisions that drive us straight to the finish line ahead of the pack,” says Willis.

nextOmnichannel, a Source of Differentiation in a New Reality