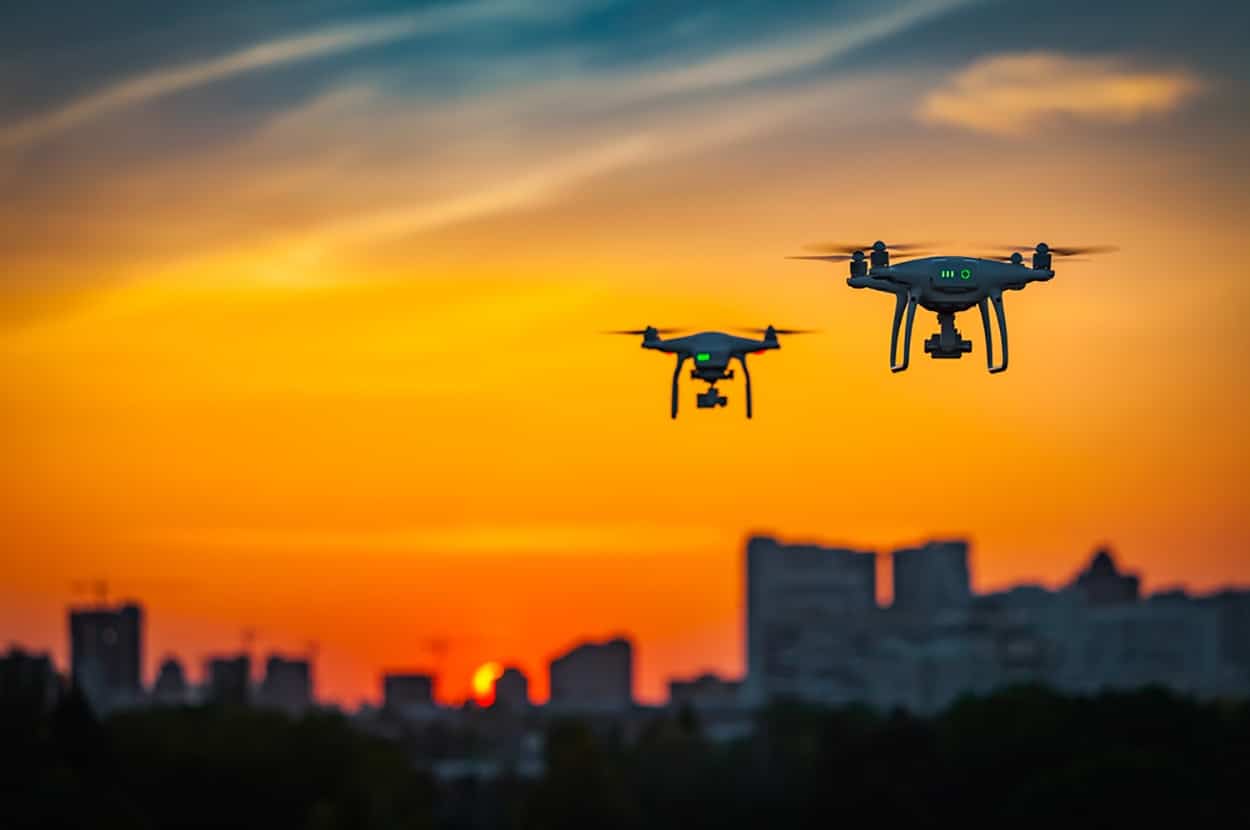 Drones are expected to become ubiquitous as service providers continue to innovate while Government speeds up regulations needed to drive integration of drones into everyday life. Get schooled on who is set to be the biggest winners of drone adoption by industry sector.

High-profile special interest groups and robotics companies believe that killer robots including drones should be banned.

Last year 116 Artificial Intelligence and robotics pioneers from over 26 countries, including Tesla’s founder Elon Musk and Alphabet’s CEO Mustafa Suleyman, called on the United Nations to ban the use of autonomous killer robots, citing it a Pandora’s Box.

According to a Goldman Sachs forecast for 2016-2020, drones will have USD 97 billion market opportunity; aided by a growing demand from commercial and civil government sectors.

While 2016 saw countries like the US, UK, Australia, France, China, Singapore legislate on the use of drone technology, the year 2017 was a watershed year for application.

The unmanned aerial vehicles (UAVs) were adopted by sectors including energy, construction, entertainment, rescue and humanitarian operations in countries where regulatory bodies have been put into place.

Countries like the US, New Zealand and Japan even tied up with private players to provide automated airspace management for drones. In India, where drone regulation is in the pipeline, operators are currently required to seek permission from local authorities and civil aviation regulators for every operation or flight undertaken.

Some experts consider 2018 to be the ‘year of drone’ considering that more countries are expected to announce regulatory guidelines enabling commercial operation of drones. Even as research in the use of drone technology is underway for wider applications and expanding to many other areas, the framework to regulate the operation of UAVs is continuously evolving.  According to a research report by Global Market Insights Inc published early in 2018, the commercial drone market is expected to exceed AUD 16.5 billion, witnessing a growth of 25% over 2017-2024.

Drone technology has swept organisations off their feet promising substantial cost savings, reducing human risk and optimising resources. Some segments like construction, oil, gas, and power, are already employing drones in collecting and processing real-time data. Large businesses in these segments are buying up companies that offer drone services and integrating drone expertise into existing channels.

A 2017 PwC projected that globally, solutions offered by drones have a potential to replace USD 124 billion in business and services and labour cost across multiple industries, with infrastructure, agriculture, and transportation experiencing the biggest impact.

Drone technology is no longer limited to a human pilot operation system.

According to Goldman Sachs Research, even though Defence tops the category in drone applications, the commercial use by businesses or civil sectors offers the largest growth opportunity in the next three years.

We have put together a short list of markets where drones are expected to have the most impact:

Logistics: Amazon, Google and German courier company DHL, food retailer 7-Eleven and a number of players in Singapore like SingPost, the National University of Singapore in collaboration with Airbus Helicopters and Food Panda, Space Autonomous Drones in Dubai have forayed into trials for delivering parcels by drones.

The current Beyond Visual Line of Sight (BVLOS) rules which make it mandatory for the drone operator to be able to see the drone that he or she is controlling is hampering the implementation of drone deliveries.

The idea of drone deliveries began in 2013 when Amazon first announced in the US that it planned to employ drones for package delivery in the near future.

Search and Rescue: Drones has fundamentally changed the way rescue operations are conducted in natural disaster areas or locating missing persons in remote or hard to access areas. By transmitting the GPS coordinates of a victim, UAVs can live stream video or images using a thermal imaging or a regular camera to the rescue teams in the command and control centre.

Some large players in the space have contracted third-party drone service providers or merged through acquisition. The World Future Energy Summit in Abu Dhabi held in February this year sent a clear message that drones in the energy and resources sector are here to stay.

Telco: Industry experts expect drones to move underwater soon. According to PwC, the addressable market value of commercial applications of drone technology in infrastructure sector lies at USD 44 billion. Companies are even conducting trials to use drones as replacement infrastructure. AT&T, for example, has tested a project where a drone named ‘Cell on Wings’ functioned as a cell tower, which can be deployed to reduce the load on static towers during big events. Facebook is also working on a massive solar-powered drone named Aquila to enable internet access to remote or impoverished areas.

Retail: Drones can scan thousands of items in a warehouse and assist retailers efficiently manage the inventory. Behemoth Wal-Mart is testing drones in its warehouses for conducting inventory checks. As per industry reports, drones can result in complete inventory check of a large warehouse in one day, which if done manually takes 4 weeks.

Agriculture: Agriculture is one of the first business sectors where the use of drones has the most potential. UAVs enable better management of production and yields. Drones with sensors and analytics software map vast crops in little time and collect relevant data regarding planting, soil and field analysis, crop health monitoring, crop spraying and irrigation management.

As the technology matures, drones are expected to take on more functionality such as spraying and data analytic services helping farmers to arrive at data-driven decisions. The global agriculture drone market revenue stood at USD 286 million in 2016 and is seen as expanding at a CAGR of 21.3% during the forecast period from 2018 to 2026.

Transport: Google, Uber, Volocopter, Airbus, China’s EHang 184, all are vying to be first to market with their own drone taxi system.

Airplane manufacturer Boeing expects to hit the market with its electric passenger drone Vahana within the next 10 years.

While Drone transportation companies all compete for market share, they currently grapple with a common foe; the absence of air-traffic management network for drones in respective countries… Whichever way the cards land, we can be certain that drones will be as commonplace as the iPhone. Microsoft founder Bill Gates, one of the biggest advocates of AI and robotics says, “Drones overall will be more impactful than I think people recognize, in positive ways to help society”. Time will tell.