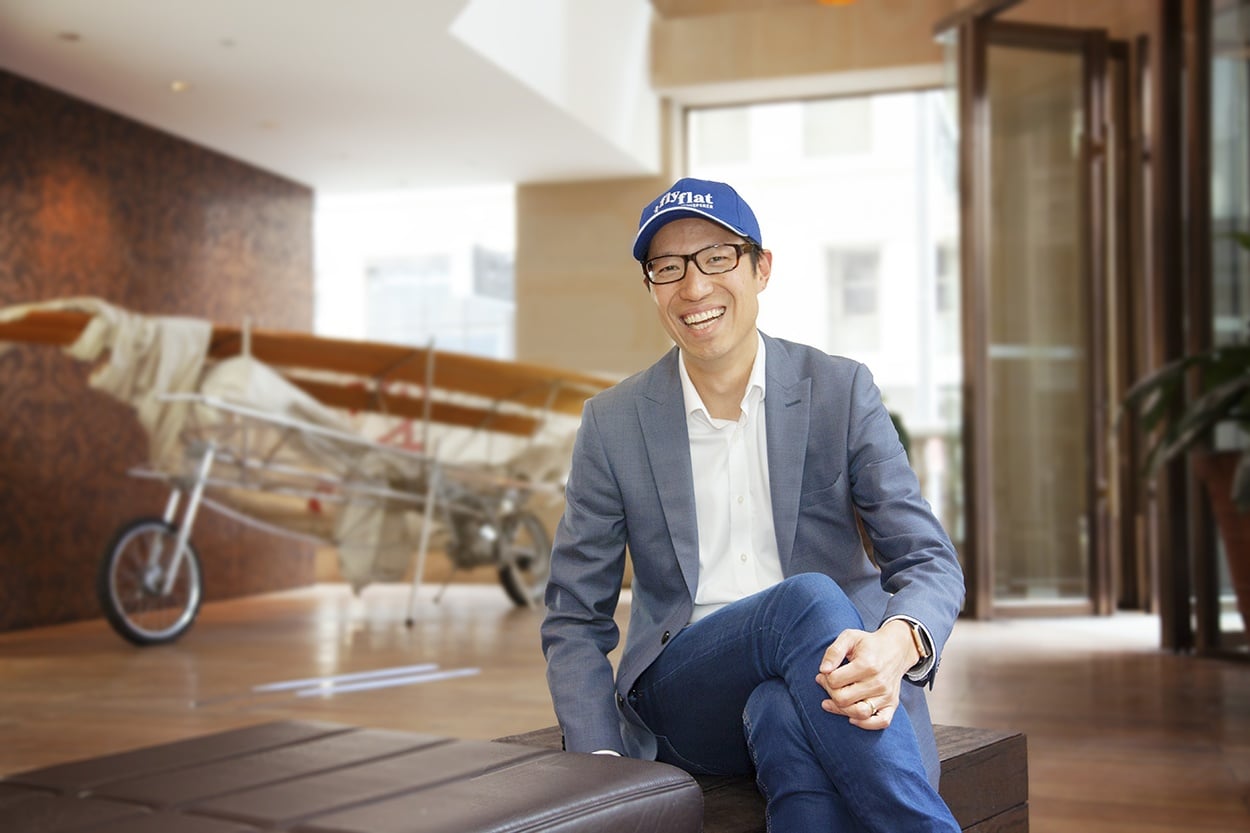 What started out as an underground subculture twenty years ago – collecting and exploiting frequent flyer mileage – has now become a multi-billion-dollar global business. We chat with Australia’s very own Points Whisperer Steve Hui and his journey to corporatising one of the greatest travel hacks in modern history.

For most of us, accruing frequent flyer miles is an abstract bonus. We are asked to present our frequent flyer card at a cash register at our local supermarket, with a dim hope of cashing in enough points to earn a free trip to our dream destination.

However, the reality of frequent flyer points being a genuine currency is generally misunderstood.  In 2012, the European Central Bank published a paper titled Virtual Currency Schemes, which declared frequent-flyer points as a type of virtual money, where users can purchase air miles with real money at a specific exchange rate – the rate of which, is determined by the airlines’ strategies, and the terms of which, constantly shift at their sole discretion.

Early adopters who understood the intrinsic value of accruing frequent flyer points, created a culture called The Hobbyists – who banded together in various online forums, sharing inventive ways to hack and harvest the most frequent flyer points through airline promotions, loop-holes in customer service policies and credit card affiliates.

The most extroverted of the bunch started travel blogs, posting regular, real time evidence of them sipping coconut fou fous in exotic locales or enjoying another in-flight service in first-class for a mere few hundred dollars’ upgrade.

Perhaps the most notorious poster boy of this bourgeoisie aspiration, is US-born Ben Schlappig, who flies a whopping 644,000kms per year and cashes in his experiences through product placement and promotion in his travel blog, One Mile at a Time.

The demographic of the most high-profile Hobbyists is broad and mostly, abroad – there’s US Civil Engineer David Phillips, who earnt a reputation as the ‘Pudding Guy’ by purchasing 12,150 serves of powdered chocolate pudding at 25 cents each to earn 1,253,000 frequent flyer points – the equivalent of 21 return flights from US to Australia. Then there’s a CFO for a University Research Centre, Gary Leff, who co-founded Inside Flyer and has been dubbed the airline industry brainiac of our times. There’s a savvy mummy-blogger and avid traveler who simply goes by the name Jennifer – who boasts a comprehensive cache of credit card promotions on her blog Deals We Like.  Then there’s The Points Guy founder and CEO Brian Kelly, who left a career on Wall Street to establish a multi-million-dollar travel blog that boasts over 2.6 million visitors per month.

The defining driver of Hobbyists seems to be two-fold; one, how to ‘beat’ the system by maximising total reward for the least spend, and two, using this knowledge for personal promotion and profit. The most lucrative activity being a sponsored credit card affiliate. Airline companies sell frequent flyer points to credit card firms, generating huge revenue for airlines – which makes product placement of the plastic fantastic highly covetable for travel-bloggers.

So what makes Australia’s founder and CEO of iFLYflat, Steve Hui, 40, so interesting is that he had taken what was originally a culture of personal profit, pleasure and a bit of ‘look at moi’, and created a world-first personal points advisory firm for time poor executives and SMB owners – essentially legitimising what started as a fringe hack – by turning it into a professional service.

With nearly 75 percent of clients coming from the SMB sector, iFLYflat works out how much money a client spends across all business expenses, such as suppliers, rent, tax, travel etc. (anything that can be paid with a credit card), and matches them to the best cards to earn more credit card points for the same spend. Depending on where clients desire to go, iFLYflat work out the best airline frequent flyer program which best suits them, which is most effective in using points to fly, as different airlines charge different points to fly to the same destinations.

As a CPA accountant with a bachelor of commerce from UNSW, Hui left a solid career with Macquarie Bank in Sydney, to start up iFLYflat in 2012 – the idea of which, germinated from his business-class flight between Sydney to New Delhi in 2008.

“I really enjoyed that flight. Just having the space and freedom of movement. In economy you’re stuck. If you want to get up, you have to think about it. You look for where the trolley is on the aisle, what your neighbour is doing – are they sleeping or watching a movie? It sounds trite – but when you’re doing a lot of travel, the little pleasures become a big comfort,” says Hui.

For those of us schleps who don’t know any better, flying business or first class equals better service, French champagne and plenty more than beef or chicken. Even children are better behaved in business class – not because they’re from wealthier stock – but having less restriction of movement makes for a happier chappy. After the thrill of having his jacket hung, with plenty of leg room and smiles on tap, Hui started doing the math.  He booked his own flights for work, and as he started to accrue more points through clever credit card choices, he was hooked.

“Most people don’t have the time to try to understand the value of frequent flyer points so there tends to be a mismatch in knowledge. You could earn points but may find it too complex, or don’t know what to do with them; so if you don’t have the desire to learn it, they’ll be no desire to earn it.  My argument is you have an amazing asset you can earn – so utilise it,” says Hui.

Hui argues that there is nothing else in the world that can help a consumer fly first-class for less than AUD1,000. To this end, the frequent flyers program offers what is essentially, the biggest bargain bonanza for the thrifty-minded.

While the satisfaction of a good deal is a big driver for clients, Hui says that the real intrinsic value is the ability to connect people sooner, and in greater comfort.

“The savings are cool, but that’s just numbers. What we help our clients do is to fly more than they ever thought they could. As a business owner, your focus is on growing your dreams, working on your business so there is little time or budget for play. So imagine if you could use points accrued as a by-product from paying bills to fly first-class.  We connect people more often – instead of paying AUD2,000 for economy or AUD8,000 for business-class, we help clients fly business-class for a fraction of the cost with their points,” says Hui.

According to Hui, the fastest way to earn points is on credit cards – and as businesses can earn fifty times more on credit cards than flying – it’s a must-do strategy for SMBs – which potentially makes Hui an SMBs best buddy.

When thinking about points accrual, Hui says knowing your point sweet spot and understanding points arbitrage are key. Points are like different currencies. Some currencies are stronger than others. Whether you have pounds, Swiss francs or Australian dollars for the same unit you can buy more stuff.  If we use flying to London from Sydney for example, there are about ten airlines that fly direct to London. Each frequent flyer program is structured differently and they charge a different number of points to fly there. Singapore Airlines charge 161,500 points to fly business-class return. Qantas will charge 256,000 points for the same trip, which equates to a 40 percent difference in value – so that’s what a sweet spot means – knowing which airline price and which airline is cheaper to fly to your destination.  Points arbitrage is using the best program for your trip. Most credit cards earn one point per dollar. But depending on where you fly, different airlines charge different prices.  Points arbitrage is where your flight may cost AUD8,000 to buy, but as long as it costs you less than AUD8,000 using your points, the saving is made in the difference.

When most start-ups go bust within the first two years, Hui was flying high after being selected as a Young Business Leader by CPA Australia in 2014. With no competitor globally, iFLYflat is a classic first-to-market success story, yet Hui asserts that it is easier to build on what someone else has started so being first makes for a lot of heavy lifting in terms of market education and raising awareness.

“Competition is great because it helps to build a bigger market – you find your own tribe, you don’t need all the customers, just enough to match your goals. So I want competitors but it doesn’t mean I will make it easy for them. In fact, when I started my business, I bought 200 of the most likely to be used domain names by my imaginary competitors…that’s obviously not a strategy that can be maintained,” laughed Hui.

Hui says that lack of understanding of the complexities involved and inaction are really his biggest competitor – generally because people need to move from an area they don’t know and trust to try to understand it.  The reality is that while everyone can work out the fine print in the terms and conditions, the determining factor is time – taking time to learn the rules, how to exploit it and of course, having a head for numerical accuracy.  The perception that points is not an asset is the greatest hindrance to take-up.  If a chap stood on a street corner giving away AUD2,000, legally, and with no strings attached, a sane person would take it.  It’s simple arithmetic. You spend x dollars on this card you get x points. There’s no way around it. Those points are worth money – we save them, manage them, spend them. So what’s the catch?

“The care is so low with family and friends. They just can’t be bothered to pursue it. They may have known about us for three years and not signed up and I’m like, dude, you’ve probably missed out on six flights. Clearly I measure experience and time by points! However, if we explain the value proposition and charge for the advice, clients will do exactly what you tell them because they want the value of the service for what they pay for – and they get the results,” says Hui.

Indeed, one of the most amusing, and often cited feedback Hui gets from new clients is when he secures a first-class flight for them –

“They literally are waiting for someone to tell them they’re in the wrong seat until the plane takes off. They just can’t believe it until it’s actually happening,” laughed Hui.

As for Hui’s leisure time, we’re not surprised to learn what he likes to do most when clocking off. “I only watch movies on a plane – laying down, obviously,” says Hui.

All images by Margaret Channing | Copyright 2016.