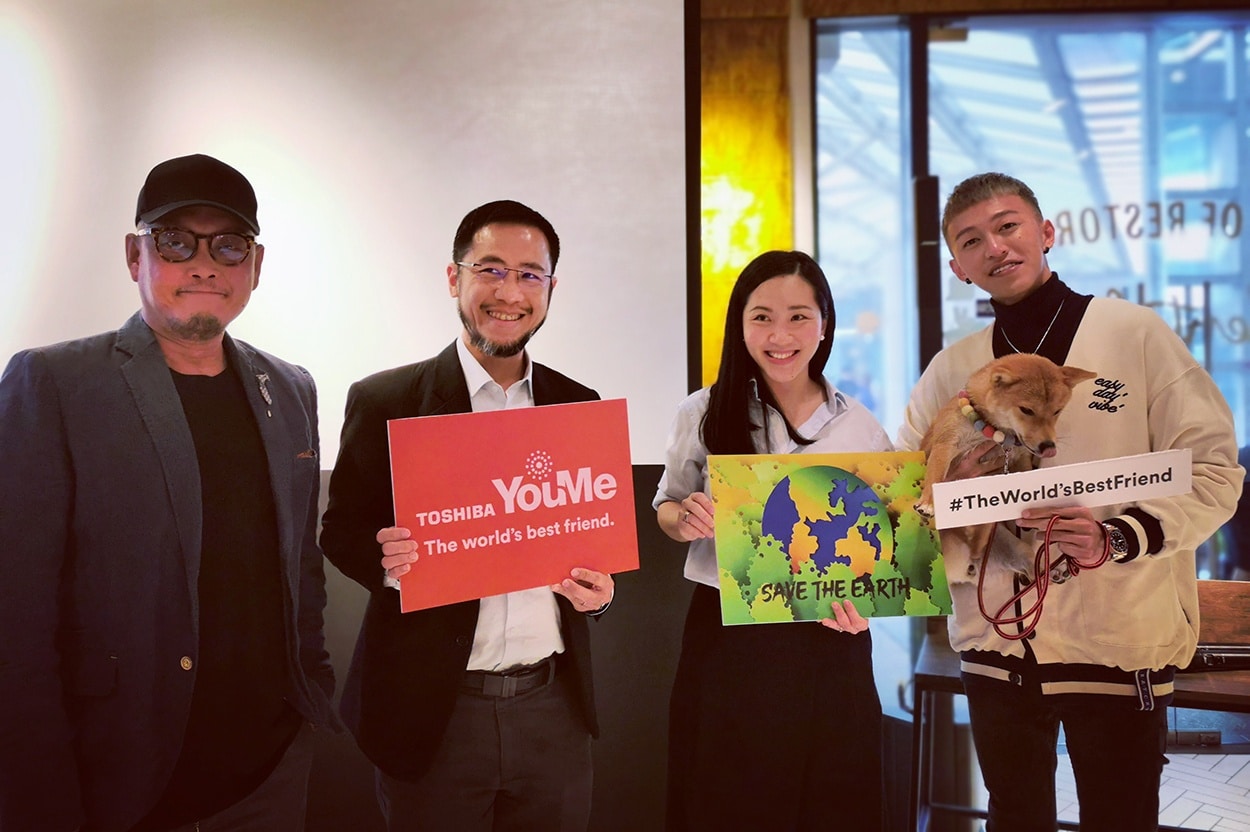 Toshiba brought together Tosh Zhang and Shiba Inu as brand ambassadors for the launch of Toshiba YouMe. Zhang, best known for his role in TV series Ah Boys to Men, and man’s best friend Shiba have come together to promote the Toshiba YouMe in time for WED 2019.

Mei Peng says their brand is the pioneer of inverter technology and aims to raise their brand awareness in this market over the next few years.

“Toshiba conditioning has been around for almost a century. We are steeped in the legacy of innovation. Today, technology is changing the world of refrigeration. The Toshiba YouMe is inspired by the Japanese word Yume which means to dream, or ideals of the future. For us, our dreams, our aspiration is also our ambition of wanting to do something better, of wanting to leave the world a better place for future generations. This unit has less impact on the environment without compromising performance. It is more efficient and reduces carbon dioxide emissions by 72%. To put that into context, one unit represents 3,000kg of carbon dioxide reduction; about 12 mature trees per year per unit to absorb the carbon dioxide we release into the environment,” says Mei Peng.

Toshiba’s Brand Ambassador Actor Tosh Zhang says he’s pleased to be the face of their campaign to raise awareness of the Toshiba YouMe for World Environment Day 2019.

“It means a lot to be able to work with Toshiba because it is a brand that has a long history and track record of innovative products. The Toshiba YouMe resonates for me because of its environmentally-friendly approach, which I believe is immensely important in this day and age where climate change and global warming is an issue that impacts all humans. It’s a pleasure and an honour to be part of this campaign,” says Zhang.

Mei Peng says the YouMe annual energy cost estimate sits around SGD 429 per unit. There have been a few design tweaks including changing the way maximum air flow is delivered. To reduce the ‘freeze’ effect from delivery of air at high speed, Toshiba YouMe features a redesigned fan that is 13 percent larger with skewed blades; which increases airflow but rotates slower for maximum user comfort. It also features a self-cleaning function in the fan coil unit. Once the unit is turned off, it continues to spin at a very low speed for 20 minutes to remove dirt particles and dry out excess moisture to reduce the potential for mould growth.

Mei Peng says serviceability and maintenance was also a consideration in its design. The unit can be disassembled into multiple components with a claim of up to 80% more clearance to access dirt.

The major differentiator for the YouMe unit is the departure from the legacy R410A refrigerant; Toshiba YouMe uses a synthetic R32 refrigerant, and claims it has approximately one-third of the GWP as R410A, demonstrating better heat exchange properties with up to 30% reduction in refrigerant usage.

“This product was designed specifically with the goal to reduce emissions. We’ll be using R32 in future models over the next few years. In our product roadmap, we are always evaluating what is most efficient and environmentally-friendly,” says Mei Peng.

Mei Peng says the Toshiba YouMe does not currently integrate into Toshiba’s SmartHome Technology, however, Peng says there are currently a variety of existing and emerging home automation solutions available.

“We are looking at the potential of integrating the Toshiba YouMe into both the Toshiba and other smart home solutions,” says Mei Peng.

For WED 2019, Mei Peng says Toshiba will be launching a contest on Instagram (@toshibaacsea) for an opportunity to win a staycation at Sentosa in a Big Tiny house. The winner will get a chance to experience the YouMe first hand in a mobile house, which Big Tiny Co-Founder Jeff Yeo says is designed to lessen impact on the environment through less resource consumption.

The Toshiba YouMe is available in all major retailers in Singapore only. For more information, contact Carrier Singapore at enquiries.toshibaaircon@carrier.utc.com

nextPhilanthroteens and the Renaissance of Philanthropy