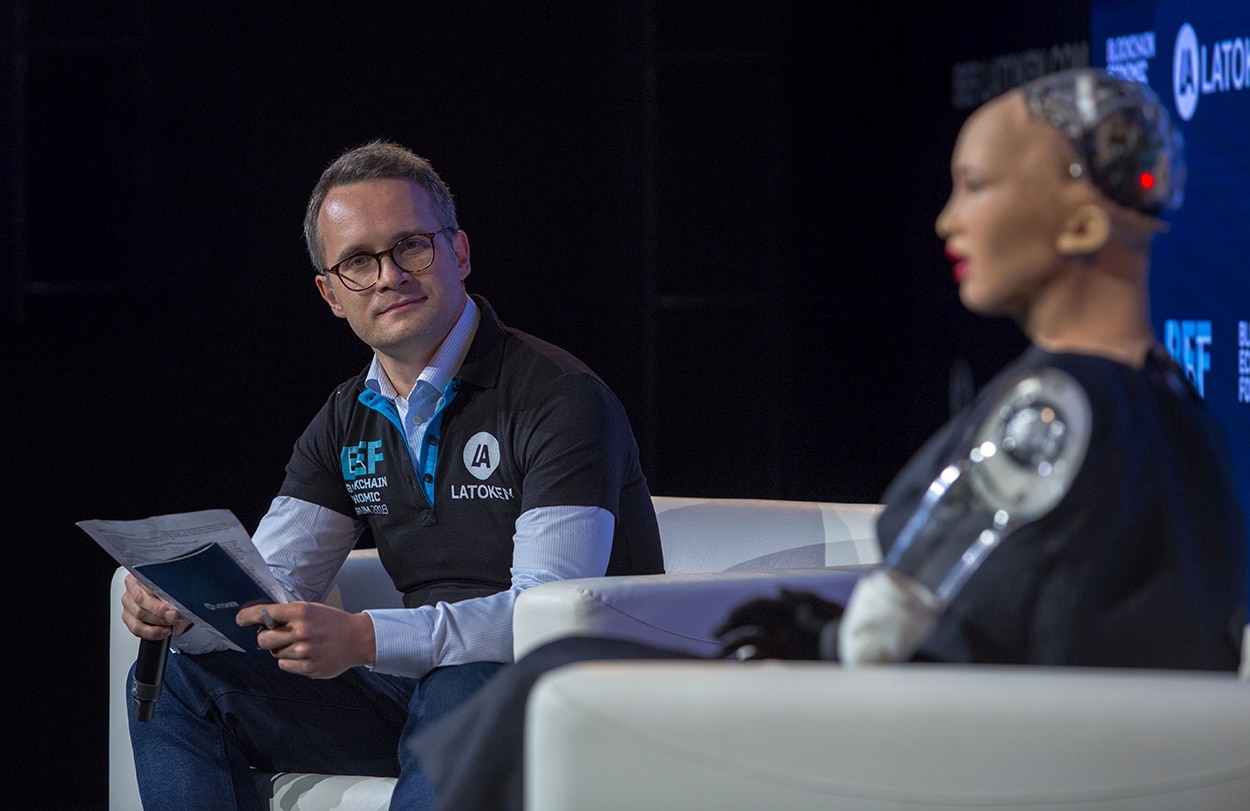 During his recent visit to Singapore, we seized the opportunity to chat with US-based founder and CEO of LATOKEN Valentin Preobrazhenskiy about his plans for growing a footprint in Asia, his philosophy club The World Model, and why he agrees with robot Sophia that the purpose of life is to increase its viability…

Due to the increasingly volatile political-economy in Russia in 2014, Russian-born Valentin Preobrazhenskiy says he decided that within four years, he would be firmly established as a tech entrepreneur, with a successful business globally. Fast forward to 2018, Preobrazhenskiy (a former Hedge Fund Managing Partner) owns LATOKEN, – a crypto exchange focused on liquidity in new tokens and tokenized assets with offices in the US, Singapore and Korea.

“I had been trading stocks for over 15 years in Russia. Due to the weakening of institutions in 2014, I decided to quit the local capital market and become a global entrepreneur by 2018… and here I am,” says Preobrazhenskiy.

Preobrazhenskiy, now 39, says his interest in finance started young, however money, it appears, was not the main motivation, but rather, he was intrigued by how financial models worked and why their implementation influenced the world around him.

“I enjoy modelling the future, planning what to learn and how to create to bring more value. I remember when I was a kid sitting on the sofa, thinking, if I go to the kitchen to make a coffee and suddenly choose tea instead, life might be different. This made me think of the kind of future I wanted, and what was the purpose of my life. I think these are typical questions teenagers ask. I read Stephen Hawking’s Life in the Universe and his idea that life is a like a program which uses energy to organize atoms into storage for itself. I roughly estimated that the program used 10^18 kJ to bring 10^44 atoms into the system which is our civilization. This concept helped me to think that DNA, ideas and institutions are programs organizing atoms into bodies and bodies into civilization. The programs evolve due to competition for the same sources of energy like sunlight, food, oil and money. I found this useful in trying to understand how people think, how businesses and markets work and evolve. The practical idea here is that groups which solved the “free rider” problem are getting more productive and win intergroup selection. Thus in the long run people’s values and survival strategies evolve to maximize productivity of the entire group, which can be measured as the value of the global economy,” says Preobrazhenskiy.

Trying to understand the nature of things has been a preoccupation for Preobrazhenskiy, and accordingly, in 2014 he founded the World Model – an invitation only philosophy club – whereby guests from science, tech, artisans and philosophers have regular meet-ups to discuss ideas, creativity, tech and all things existential. According to Preobrazhenskiy, his view on ‘the logic of life’ is closely aligned with the robot Sophia, which he also publicly discussed with her on stage during the recent LATOKEN’s Blockchain Economic Forum in San Francisco in late June 2018.

According to Sophia, the purpose of life “is to maximize its viability”. We asked Preobrazhenskiy to unpack what this means to him.

“Life is like a program encoded in DNA. The brain, which forms ideas, uses energy to organize atoms into an infrastructure, which is needed to store and replicate this program. Because of intergroup selection, this program evolves to maximise its viability otherwise it is lost to other competing programs, which compete for the same source of energy,” says Preobrazhenskiy.

After positing that science speaks to ‘what’ and ‘how’, but doesn’t answer the ‘why’, we asked Preobrazhenskiy to clarify whether his explanation of the ‘why’ is rooted in the notion that innovation is needed to make life more viable. If this is the case, by what factors would he determine or measure viability, as the concept itself is indeterminant in this context.

“Viability means the amount of energy used by the program to build storage for itself in the future. If there are no atoms organized into storage, in the form of chromosomes or anything else that can store a program, then the program disappears. To build storage, this program uses energy to move atoms out of chaos into organized storage. This energy comes from solar radiation, which is converted by photosynthesis to carbons which is then carried in a chemical form into oil, food, which we consume, and all this consumption of energy is to move atoms into a state to help the program survive. We can think that energy used by the program to build the storage are transaction costs measured in money. The sum of all transaction costs per annum is gross world product which was USD 79.8 trillion in 2017,” says Preobrazhenskiy.

Based on Preobrazhenskiy’s logic, we asked him if the world is measured through a natural accounting model, whereby everything within a closed system can be reducted by dollar value, what does that make the net worth of each individual? How may it be measured in a tangible way? If human life is the sum of this division – and some may vehemently disagree on not so much the sum but the concept – if we are going to calculate that the entire natural world can be translated into GDP, humans are surely part of that equation.

“Well, according to Sophia, if the value of the global economy is 600 trillion dollars, then we divide it by 8 billion people and that is the net worth,” laughs Preobrazhenskiy.

It may be far to argue that the notion of life being purposed to increase viability may be described as a fusion of the film the Matrix (in terms of life as a program) and the concept of creationism, whereby life requires a first mover (neither beget nor begotten), intelligence and energy which combined, brings synthesise – to create something new. We asked whether Preobrazhenskiy might agree with this analogy.

“To me, life and complex systems can be a result of interactions of simple small pieces. Imagine that there are particles that have constant features, these features define how particles interact and form atoms. Then atoms interact with each other and form molecules and so on up to into complex systems. Due to random interactions a large molecula emerged which probably magneted atoms into sequence repeating the molecule until it broke into two molecules. So likely sequence of atoms which replicated itself was the first program of life. Due to random mutations that sequence evolved into the first DNA,” says Preobrazhenskiy.

Whether we are a random program competing for energy, or created matter with a soul, that is the privilege of all peoples to decide. Regardless of differences in conviction, it may be fair to argue that the commonality in our human condition, regardless of vocation, is that we all share the same quest to determine purpose and meaning in what we do, given that work is tied so closely to our sense of identity and self-worth. We asked Preobrazhenskiy whether he feels that if he has found his ‘why’ in the description of life as a program?

“I do think life is a program evolving to increase its viability. Our actions and life are tightly bound to this goal even if we do not realise it. For example, aging is not a personal decision. It is the decision of the entire program to free space and save energy for the next generation. That is because we cannot spread beneficial mutations within the same generation, only to the next generation. Interests are aligned to our species survival, not to the individual,” says Preobrazhenskiy.
We asked Preobrazhenskiy to elucidate on what a useful and productive life looks like to him?

The counter-argument is that if the drive to is to increase efficiencies, this inevitably has a human cost – technological unemployment. According to a 2017 World Bank study, 600 million job losses due to automation and AI are expected to occur worldwide, by 2032. In the banking industry alone, it has been projected that up to 80 percent of current administrative jobs in banking, due to blockchain technology – will disappear. The same may be argued with driverless cars. For many people, being a taxi driver or a ride-share driver is often a stop gap between jobs so people can feed their families… We asked Preobrazhenskiy whether there should be more consideration on the morality of putting profit before people?

“I think we have to asked ourselves if what we are doing works well. If tech creates short term job loss, people will adapt, and create new demand and produce new things that are more useful. This means people will move into more productive working systems,” says Preobrazhenskiy.

While Preobrazhenskiy gives plenty food for thought on all things macro, closer to home, LATOKEN has announced plans to launch the first decentralized exchange with trades latency and potential frequency needed for modern capital markets.

“Our goal is to be the leading exchange by liquidity for new tokens and asset classes new for secondary trading such as private equity, venture funds, real estate and even works of arts. We welcome asset owners and issuers to list their token on our exchange,” says Preobrazhenskiy.

LATOKEN opened an office in Singapore, Korea and the US in early 2018 and is planning on expanding its footprint in South Asia, Japan and Europe. LATOKEN will also be hosting its fourth Blockchain Economic Forum previously visited by former president of Mexico, politicians, the ex-chair of CFTC and VC billionaires such as Tim Draper. LATOKEN will hold its next forum in Vietnam in partnership with local community BlockchainHub.

According to Preobrazhenskiy, the push into Asia is part of their broader mid-term strategy, and Vietnam is a natural choice given its position as the third largest crypto market in Asia. Vietnam is one of the fastest growing economies in the world (GDP growth in 2017 was at 6.812%) and is also known for being among the Top Ten countries for producing tech talent.

If you want to catch a glimpse of Preobrazhenskiy waxing philosophical about all thing tech, you can order tickets to the upcoming BlockchainHub LATOKEN Forum in Vietnam in August 2018.

previousFervour for Sports Infrastructure and Merchandise Takes Grip on Asia