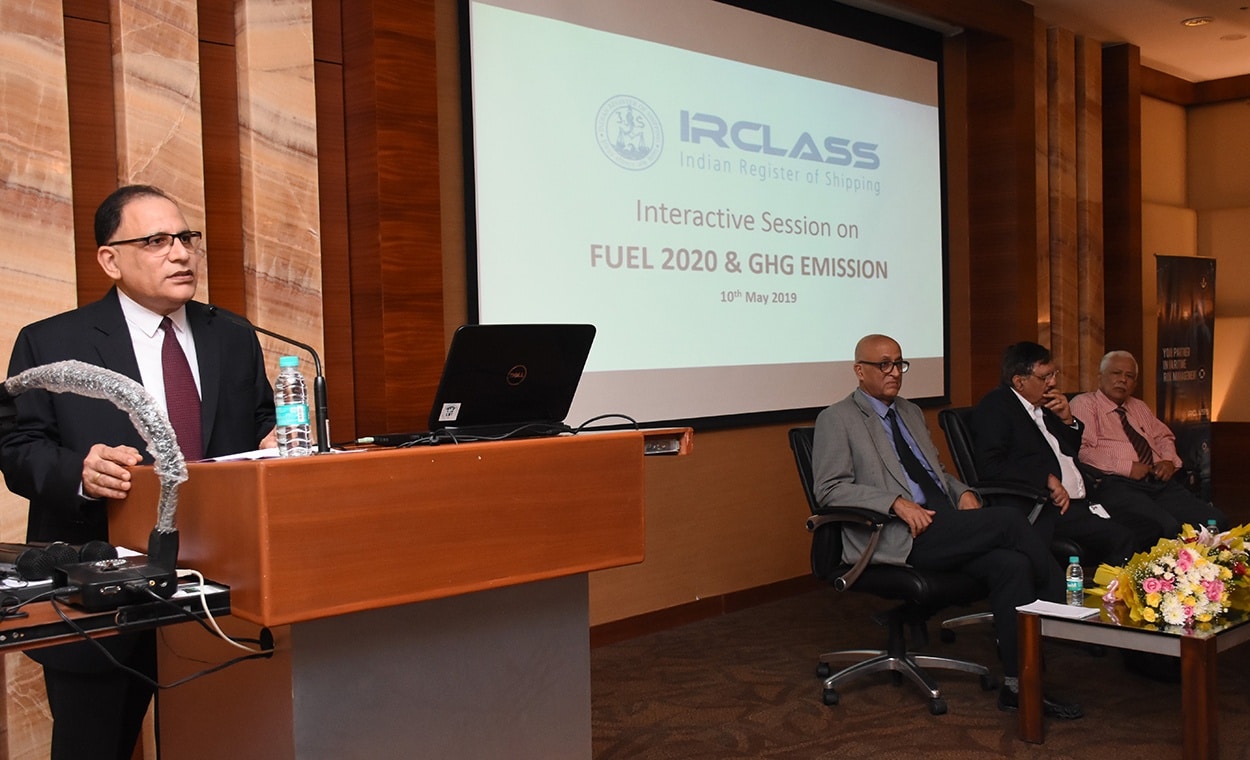 Indian Register of Shipping Joint Managing Director Vijay Arora shares his smarts on how the shipping industry can work together to meet the IMO sulphur limit compliance and GHG emissions strategy.

In his welcome address, IRClass Joint Managing Director Mr Vijay Arora, spoke about the rapid advancements in marine fuel technology and the need for both short-term and long-term plans to implement the IMO sulphur limit compliance and GHG emissions strategy.

Former Director of IMO’s Maritime Safety Committee and Guest-of-Honour Capt. Ashok Mahapatra, highlighted a lack of clarity among ship owners, underwriters and charterers in dealing with non-compliant fuel post-sulphur limit and the disposal of non-compliant fuel, the availability of compliant fuel and the development of joint industrial guidelines for shipowners.

“It is important that we include stakeholders from the supply side, such as fuel suppliers and equipment manufacturers, when debating how the industry should respond to the IMO sulphur limit compliance, we are likely to see a shift in our energy future where LNG, fuel cells and methanol will take a more prominent role,” says Sharma.

According to Arora, control of fuel oil suppliers poses specific, regulatory challenges identified at IMO which have been addressed to a certain extent and are still under discussion. Responding to industry concerns that individual ship operators ensure compliance, the IMO has adopted resolution that bans the carriage of high sulphur fuel oil, unless a scrubber is installed on a ship. At recently concluded MEPC 74, Res. MEPC.320(74) – 2019 Guidelines for consistent implementation of the 0.50% sulphur limit under MARPOL Annex VI was adopted which are intended for use by Administrations, port states, ship owners, ship builders, and fuel oil suppliers to ensure consistent implementation.

“Fuel oil suppliers are expected to deliver a fuel which meets the parameters agreed between the supplier and their purchaser. ‘Supplier’ in this context may not necessarily be the actual person delivering the fuel; the Fuel oil supplier is the party responsible for the delivered quantity and quality either directly or through sub-contractors and is also responsible for maintaining appropriate documentation to help identify product origins, including the manufacturing source and the various links in the supply chain, to enable traceability. Monitoring fuel oil quality at each step of the supply chain is of paramount importance as it helps in identifying points of entry of any foreign or harmful materials/substances if these are discovered when the fuel is being used; where a supplier get components from other suppliers, they should get assurance that appropriate supply chain quality control steps have been taken,” says Arora.

In respect of technical challenges, Arora says switching to distillate fuel is currently a viable option for following the new sulphur limit.

“This may appear to be a simple task at first glance, but the change-over procedure actually requires significant attention from crews in terms of operating, as well as extensive preparation on board the ship. For example:

Temperature: As the two fuels’ operating temperature differs by about 100 degrees, the change-over may cause a rapid fall in temperature and increase the danger of thermal shock to the equipment, if not handled with care.

Viscosity / Lubricity: The fuel systems need to account for this difference in viscosity during operation, to avoid fuel pump failures and leakages. Lubricity is closely related to viscosity – if viscosity is too low, this may cause a lack of lubricity.

Fuel compatibility: The fuels can become incompatible and clog filters, which may cause the engine to shut down.

Cylinder lubrication | acidity: Decreasing the sulphur content of fuel has an impact on its acidity. The amount of alkalizing cylinder oil needs to be adjusted to avoid excessive engine wear or even damage.

Cold flow properties: If fuels are held at temperatures close to, or below, the fuel pour point, the fuel may be difficult to pump, and separated wax may block filters and create deposits on heat exchangers. Compared with residual fuels, distillate fuels have, in the past, generally not required heating. However, the increased use of distillate blending components with higher cloud points for the blending of low-sulphur fuels may necessitate some level of heating for fuel storage, transfer and injection.

Catalyst fines: Catalyst fines originate from fuel blending components derived from the refinery fluid catalyst cracking unit. There has been speculation that such components will find increased use in the blending of max. 0.50%-sulphur marine fuels. Excessive levels of catalyst fines can cause accelerated abrasive wear of fuel pumps, injectors, piston rings and cylinder liners. It is essential that residual fuel is pre-treated through a combination of settling and centrifuging prior to combustion to reduce the level of catalyst fines;

The above technical challenges could be dealt with proper operational procedures on board the ship,” concludes Arora.

We asked Arora to explain how marine fuel tech has advanced and what it means from energy efficiency and emissions perspectives.

According to Arora, the world merchant fleet gradually shifted from sail to a full engine powered fleet from around 1870 to 1940. Steamships burning coal dominated up to 1920, and since then coal was gradually replaced by marine oils, due to shift to diesel engines and oil-fired steam boilers.

“Today, shipping, along with many other industries, is reliant upon fossil fuels to provide the energy source needed for propelled motion. Fossil fuels have very high relative energy density, simple storage requirements, ease of combustion and infrastructure available. All these factors have made them very convenient and this has made the transition away from fossil fuels daunting to some stakeholders. From emissions perspective, Biofuels and Hydrogen are being considered as feasible replacements for fossil fuels, although concerns regarding land-use (for biofuel) and fuel cell maturity (for hydrogen) are apparent. Battery technologies, with fully electric vessels, have advantages, such as the technological maturity and experience in other industries. However, concerns arise over how suitable batteries are to long-distance shipping. Increasing use of biofuels raises concerns over land usage, such as competition between food or fuel crop, or advancing deforestation. Sustainability concerns need to be taken into account before biofuels can be considered as net-zero carbon emitters. Simply moving the emissions upstream into the fuel production process is not aligned with the overarching aim of de-carbonisation, and so emissions must be evaluated from ‘Well to Wake’,” says Arora.

According to Arora, the maritime industry can address these issues on multiple fronts. On the energy efficiency front, Arora says SEEMP and IMO DCS can play an important role as far as existing ships are concerned.

According to Arora, the initial IMO strategy puts emissions reduction measures into three-time frames: short, medium and long term which relate to the timing of the emissions reductions taking place respectively before 2023, 2030 and beyond 2030.

The short-term measures include the Review of EEDI Reference Lines.

“Taking into consideration that some ships types were easily meeting phase three reduction targets, the phase three for those ship types (general cargo, containerships, gas carriers etc) have been preponed to 2022. Moreover, the reduction target for container ships has now been increased up to 50%. There is also the use of speed optimization and speed reduction and encouragement of Port Developments such as provision of ship and shore side/onshore power supply from renewable sources and infrastructure to support supply of alternative low-carbon and zero-carbon fuels,” says Arora.

“This could be in the form of a CO2 charge, a fuel levy or an operational efficiency metric that would deliver equivalent savings. Some of the funds raised from any initiative could stay within the sector to incentivize fleet de-carbonisation. Funds generated through carbon pricing can enable R&D, infrastructure development for zero emission bunkering and retrofitting existing ships or building new zero emission vessels. Operational energy efficiency measures for both new and existing ships include indicators in line with a three-step approach of data collection, data analysis and decision making which may be utilized to indicate and enhance the energy efficiency performance of ships,” says Arora.

As for long-term measures Arora says its not very clear at the moment as the timeline is beyond 2030. He says the initial strategy includes pursuing the development and provision of zero-carbon or fossil-free fuels to enable the shipping sector to assess and consider decarbonization in the second half of the century; and encourage and facilitate the general adoption of other possible new/innovative emission reduction mechanisms.

“An ambitious IMO sulphur limit compliance target will generally require massive and rapid changes, often involving capital investments that might not have clear prospects for profitability. Without appropriate national and international policies that can provide strong incentives and mechanisms that favor the adoption of low-carbon technologies, ambitious targets and strict regulations might face strong resistance by relevant industry stakeholders. Therefore, it is important that any targets and mitigation measures that are imposed to the industry are accompanied by incentives and supporting policies if they are to be effective and widely accepted by the stakeholders,” says Arora.