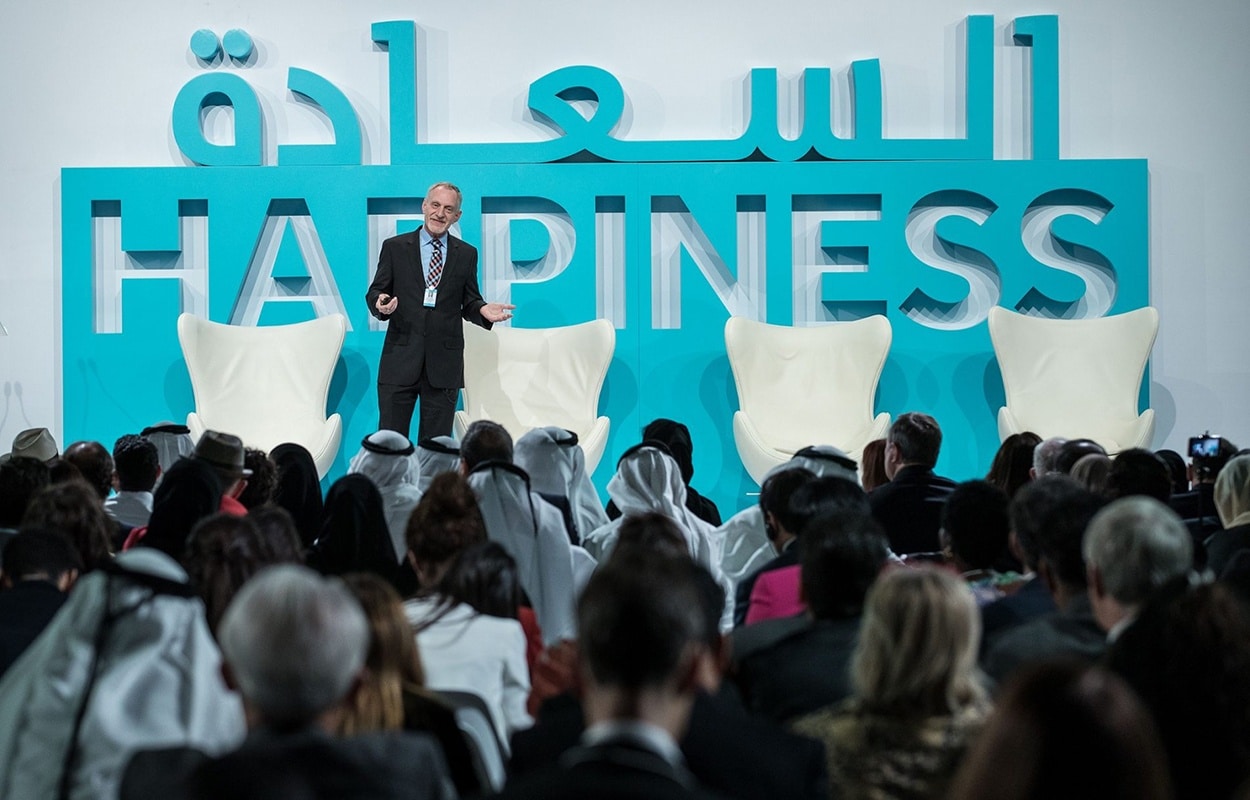 Making happiness the cornerstone of good governance may still be a distant dream, but the recent effort by the 2018 World Government Summit held in Dubai in February 2018 to make global happiness a reality deserves a standing ovation.

The UAE 2018 World Government Summit, with happiness as a core motif, was organized amid a shadow of several global conflicts, natural disasters, the rise of nuclear proliferation, emergent diseases…the list just goes on.

Associating happiness with good governance may seem like a utopian ideal when considering the kind of geo-political powerplay, muscle flexing and Machiavellian-type narratives that fill our news feeds daily. The late US President John F Kennedy said in his 1961 inaugural address “For mankind holds in his mortal hands the ability to end all forms of human poverty, and all forms of human life”. While this statement was made in the context of the dangers associated with nuclear war during his administration, today, this comment continues to resonate.

As a hopeful counter-narrative, a global dialogue for inculcating happiness in governance was the top policy agenda of the summit. With a 193-country representative attendance, Leaders from around the world converged to discuss and compare best practices in governance at both an organisational and national level, with participating countries passing a resolution to adopt agreed practices in their day-to-day governance.

It was generally agreed that the idea to put happiness in governance emanates from a ‘down-to-earth realism’ that choosing happiness over naked power is the path to global survival, safety and prosperity.

All these things are the core of government functioning and are intrinsic for people’s trust and confidence in their respective governments.

Scandinavian countries may be a testimony to the success of such value systems and which is why they routinely top the list of happiest countries in the annual World Happiness Report. In these countries, prosperity, health, generosity and trust score highly. They also have low or negligible corruption and the wealthy classes may not necessarily hold high government positions.

On the other hand, in some other high-income countries, the happiness ranking is far lower. There is excessive inequality of income, wealth and political power causing a huge divide between the political and working classes. In unequal societies, public services tend to be of highly varying quality, often excellent in rich neighborhoods, and inadequate in poorer neighborhoods. The public does not have faith its political class. This disparity generally leads to a rise in violence and crime.

All these factors combined, when a society is mostly equal, leads to an increased happiness quotient.

Good governance is measured by how much Government acts for the welfare of average citizens and its efforts in pursuing the common good. This year’s Nobel Peace Prize to an International Campaign to abolish nuclear weapons recognizes the grassroots work of hundreds of organizations around the world which are engaged to end the threat of nuclear war. This achievement is a remarkable sentiment that may demonstrate that the general populace no longer accept narratives peddled by career politicians.

The 2018 Global Happiness Policy Report was devised to develop increasing equitable and sustainable human well-being. This year’s policy document has seen a sea change in its perspective and is modeled on the Bhutanese style of Governance; a country which over four decades ago, chose to make happiness its national objective.

The policy is a result of several decades of tireless research aimed at creating a trans-disciplinary science of happiness. It is also a result of growing dissatisfaction with using GDP per capita as a sufficient measure of human progress.

The United Nations General Assembly for the first time on 19 July 2011, adopted a Bhutan-sponsored resolution that “called on United Nations Member States to undertake steps that give more importance to happiness and well-being in determining how to achieve and measure social and economic development”.

The Global Happiness Council was formed in early 2017 to help in the formulation of the happiness policy document with participating countries. The first order of business was to compile an inventory of happiness policy strategies and interventions that were tried and tested in communities and countries around the world.

The chapters in this first Global Happiness Policy Report are devoted to the research for policies that could help to improve the levels and distribution of happiness. Subjective well-being, especially, but not exclusively, was assessed by asking people how they evaluated the quality of their own lives. This was the starting point which provided a good measure of the quality of life in society as a whole, and is a useful focus for public policy.

The participants in the summit believe that this report was the first effort to assemble global evidences about which policies were likely to be most effective in enabling better lives.

The process of developing and testing policies for human happiness is still at a nascent stage. Many chapters of the policy document combine a review of current policy suggestions or interventions with recommendations for what needs to be done to select ones that could be considered best practice.

The scientific basis for this starting point has been derived from world happiness reports and a host of scientific studies spanning over several years and reviewed all across the world.

The genesis of happiness is peace. This can be achieved only by putting our efforts into global diplomacy over unilateral actions by individual Governments. Settling disputes on the battle field is less effective than engaging in peaceful negotiation.

The Global Happiness Summit deliberated how the governance model should be built to make societies more inclusive.

Skeptics of the happiness movement believe that pursuing happiness is idealistic. They argue that power, not happiness, is the inevitable business of government.

Their argument against happiness being a key metric of good governance is that shared happiness can never be achieved, regardless of how many yearn for it. This is largely premised on the assumption that creating an inclusive society is an impossible task in countries with high disparity in incomes, multiple ethnic groups and cultural diversity.

Skeptics claim that Scandinavian countries cannot become a model society for all countries where inclusiveness is a result of ethnically homogeneous societies, those with a shared culture, language, religion, and history of relative economic equality. Scandinavian countries have earned their high happiness score through a century of creative social and political innovations that was built on a base of ethnic homogeneity.

According to the Bulletin of Atomic Scientists, the hands of their Doomsday Clock currently point to 2 minutes 30 seconds to midnight, the closest it’s been since the early 1980s, (since the Cold War), making the recent Global Happiness Summit a timely, welcome and much needed, world initiative.